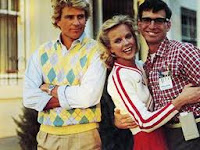 There is a scene in "Revenge of the Nerds" in which Lewis disguises himself with the bad guy jock's Darth Vadar-like costume to trick his girlfriend into thinking he's the jock as she goes into the carnival room, where she brings him into the moon sections and says, "You want to do it on the moon?" Now, it seems to me that Lewis did this for the sole purpose of tricking the pretty girl of his dreams into having sex with him because she'd never knowingly have sex with a nerd, which might be morally wrong, but . . .

The beauty of this scene is that, after refusing to take his mask off, which should have aroused some suspicion, as well as the fact that he's built like a nerd and not a jock, which also should have tipped her off, he gets her off with some oral so good, that when she sees it's not her boyfriend but in fact the nerd - the very nerd who installed cameras in her house to spy on her naked as well as see her naked live in the process as pictured - she doesn't care and wants to be his girlfriend.

Let me just say right now that Lewis is a hero. He didn't compromise his nerdy persona to get his dream girl, and he must flip that nerd tongue like a dyke to have pulled off such a change in world view in that young lady. After all, it was Lewis who said he was good at sex acts because all jocks do is think about sports while all nerds do is think about sex. I think he has a point here because I didn't get laid until I was around 21-years-old, so now every time I'm doing it, there's still a drastically undersexed teenager inside me going, "Yes! We're doing it!" So, I think I bring more enthusiasm to the table, or bed as it were, than the guy who's gotten laid every day since he was 15.
However, is this rape? What's worse, is it nerd rape? And is that worse than regular rape? You be the judge, seven readers. Let's talk . . .
Posted by Dr. Kenneth Noisewater at 2:39 PM

It's never rape when the woman is turned on and wet. Absolutely not. "Devious seduction" is the expression you're looking for.

As long as I've had a blog, it seems that I've always had that commenter that comes by consistently dropping bomb comments (Dr. Zen, Chud, and Heff to name a few), and I think you're that guy right now. Thanks, sir.

my expensive, liberal, feminist-leaning education does not permit me to answer this question in a manner that is not verbose and serious.

Jov: Cool. I appreciate you holding back on raining on this fun parade. Still, your feminist angle is appreciated in this very important debate.

That's bullshit. It's because I think about nothing but sex that I can't last more than 3 minutes. I try to play it cool, but the minute the boobs pop out there's like a damn cymbal monkey in my brain going "Vagina, Vagina, Vagina!" It goes down hill from there...

I'm going to wager a guess: is this my good friend, Crom?

Well, Bill Clinton taught me that oral sex is not sex, so I guess it can't be rape.

BTW, my word ver is "banzings," which sounds like a slang term for tittays.

I've always been uncomfortable with this scene, even for what is, ostensibly, a cheesy movie. If she knew it was Lewis, no way would she have let him do anything to her. For my money, this is a clear case of rape all the way. And to then have her basically say, 'it's all ok coz you were so good,' is just bullshit. I call shenanigans big time.

yes, this scene always seemed a little weird. Like out of a melodrama.

I have never seen the movie. From what you describe I'd say it is fine because it was her idea and she didn't check who it was. If she cared, she would have made him take off the mask right?

My first time was when I was 15 or possibly 13 (it's a long story making me unsure of if the first one counts). That is funny because if you know my real life situation you would know that right now I am stuck in a place where I feel it wouldn't be right for me to date quite yet (that is funny all by itself because why would I be worried about morals and what is right considering the facts?), but it has been a really really long time so it is all I think about. Like a teenage boy.

People - its a MOVIE. A funny 80's spoof to boot. Nothing in that movie is a worthy rape noting. Lewis licked her cooch, she liked it and that was all it was.

Beck: True, and I think Banzangs could really catch on!!

Tenny: Thanks for coming by, and I'm glad this scene has always made you think too. It's weird, right? I mean, not as blatant a rape as in "Animal House," but still . . .

Phil: That Lewis is a straight up rapist but a stone cold pimp. All wrapped up in one.

Candy: True, but they were mortal enemies! Until that fateful day on the moon . . . Deep shit.

Radio: Your homework is to watch "Revenge!" It's fricking funny and a classic. Shame! But thanks for sharing! : )

Kimberly: If you don't like pointless analysis of random shit, you might not enjoy yourself around these parts. That's pretty much all I got. : ) Then again, if you say things like "licked her cooch," you should fit right in.

Eleven: Quite true. Nerds do EXTENSIVE research. Thanks for coming by!

well. technically, it's rape. however i do believe the nerd would had revealed his identity afterwards, regardless. i think he just wanted to prove that he could get her off better than a jock, and it worked, she enjoyed it enough to marry the nerd. besides having major balls to pull a stunt like that, it was the classic trojan horse scenerio, that was the beauty of it.... yeah. it was shady what he did, but in his eyes, a gamble worth taking, and it worked out beautifully for him...also note that the jock would had probably put a date rape pill in her drink. so i suppose if you really contrast and compare....

I wasn't going to comment, but then the word verification is "getherpe" soooo, that's just funny.

Burjan: Yes. Nerds rape with more ingenuity than jocks, that is for sure. Terrific comment, Burjan.

Sista: Getherpe could very well be the new term for nerd raping.