Beefcakes, Wiggers, and Wankers (In That Order) 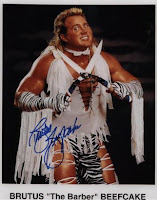 I was all ready to do a blog about the pro-wrestler Brutus "The Barber" Beefcake, since I recently used his name in the "name game," you know, when you name celebrities and "drink while you think." The name is a great one to use, because names with the same first letter for the first and last name reverse the order. Although, that one is a triple, so maybe the direction straightens back out, but anyway, more importantly, just uttering the name for the first time in ten years had me giggling all night. I did some research for the blog, and while I'm sure it would have been decent, I really just wanted to type the name Brutus "The Barber" Beefcake. And now I have, and I'll type it one last time for good measure. Brutus. "The Barber," Gosh-damn Beefcake.

Now for the actual topic: My summer job as a photographer of tourists has brought me in contact with a lot of interesting coworkers, but they all share one quality: They're all a hell of a lot younger than me. It kind of sucks being the old guy, and I was reminded of this the other day when one gal said that I am so "90's." I had never heard that before, but I guess it's the same as when I see a guy with a mullet and jean shorts and I say he's "so 80's." To this younger generation, the 90's were a time when they were little kids, like the 80's were for me, so they didn't really experience the times, in terms of fashion, pop culture, etc. You know what is REALLY mind-boggling to me? These kids weren't even alive when the Bears won the Super Bowl in 1986. They don't know shit about "The Fridge," "Mongo," "Butt-head," "The Junkyard Dogs," "The Black and Blues Brothers," or any of that stuff. When they were little kids No Doubt and Sublime were all over the radio. That's nostalgic for them. Weird . . .

So the other night I found myself partying with these 20-year-old art students, full of Keystone, which was what I drank at their age, and while admittedly drunk, I typed the following memo into my phone for future blogging purposes: "Wall-to-wall wiggers. Black people have always had a strong hand in popular culture, which has been a good thing. However, it has turned white, suburban America into a nation of wiggers." Okay, I know, that's not at all a PC term, in that it implies it's alright for me to use the n-word, which it's not. I just don't know another word for it, and it sounds good with wall-to-wall, just like Beefcake jives so well with Brutus "The Barber."

It wasn't just their wiggerness, but their not-yet-cultivated, embarrassing personalities that bothered me. As Richard, my Irish coworker, who is the same age as them, said: "They're a bunch of wankers." I saw one wanker wearing the same exact sunglasses (at an indoor party), Rolling Stones shirt (fucker probably only owned the greatest hits,) and do-rag at two straight parties. Yeah. I went twice, which I'm not proud of. Anyway, his name was "Smitty." NOBODY should be called "Smitty" until they are the old guy at the office. I got news for Smitty, he will be the old guy in office some day, but long before that he will be the wanker of the office. This guy was so darn serious about throwing ping-pong balls into plastic cups, you'd think it was the Olympics or something. No Smitty, not the Olympics, just the Wankerlympics.

I have to say though, I've been really crabby and unhappy with my life lately. Part of my hatred for these kids really stems from jealousy, and I'm not talking about being jealous of their ping-pong ball throwing. What bugs me about these kids is that they're so young and studying to do something creative with their lives, which is what I always knew I wanted to do, yet I settled to study more "practical" things. Well, now I'm "practically" broke and my only creative outlets are this rag that I write and my shitty guitar playing. One wanker I was talking to is studying to be a writer, and my first instinct was to doubt that this schmuck has to offer the world, since he too was a white kid with a do-rag and camouflage pants AND shirt. Who knows? Maybe he'll be the next Hemingway, maybe he'll fall flat on his wanker-face, but at least he's going for it. Meanwhile, this wanker is lamenting and drowning in his own hatorade. I just learned that term. Jeez, I AM "so 90's."
Posted by Dr. Kenneth Noisewater at 8:10 PM

Lots of hugs and kisses your way Doctor. Don't fret my dear, it seems like they are so full of promise right now, but in a few more years their back will be broken by "the man" and they will be just as miserable as the rest of us.

AND. AND!!! If some wigger/wanker kid ends up being the next Hemingway, well then he needs to do us a big favor right now and off himself just like Papa did. I bet the little fuckers don't even know who Hemingway was much less that he purchased the gun that he killed himself with at Abercrombie and Fitch. Yeah that's right you illiterate punk ass bitches... your favorite overpriced t-shirt store use to sell firearms way back when. Suck on that fuckers!!

Wow, I guess I really don't like the youth of today. I'll need to ponder upon this some more.

Two words I've learned from blogs that I have incorporated into my vernacular: Hatorade. Cockulence.

You people are fucking awesome.

Geez--I can't think of a worse time in human history to try to become the next Hemmingway.

You would need to couple that shit with a serious day job--or take refuge in academia, which is great for writers (I mean, where else but college can you FORCE a person to buy your book?)

Either way, Eminem will have to lose the doo-rag.

It's very 90s of you to worry about being too 90s. But then, 10 years ago I was worried about being too 80s. The chain of late-20s disillusionment goes all the way back to some dude who was, like, "these young kids today -- people have been chipping stones into crude tools ALL THEIR LIVES!"

Damn wiggers! They be bringin us down!

Pipe down, grandpa. You don't want us to send you back to the home, do you??

There, there, grandpa -- it will be ok. Just sit in your chair and we'll see if there's any of that old wraslin' you like ;)

yeah, but do you remember when the barber went awol after a "boating accident"? yeah... poor brutus. anyhow, i am a beer pong champ, and it IS like the olympics. but uhh... question, wasn't it the '85 bears that won super bowl XX. unless you were saying that they won it '86... but no one cares about that. cuz they're the '85 bears.

My 18 year old cousin didn't know who Mr. T was. When I referenced The A Team, her response was, "What's the A Team?"

I signed up for AARP right then.

Keystone... the drink of champions. I saw a homeless guy downtown drinking a sixer of Keystone last week.

adw: I dropped your Hemingway knowledge on some kids the morning I read your comment.

Zen: Yeah, I don't see that dumby getting published with a do-rag.

Jenny: Yes! May they all get mowed down by the drive by they've been hoping to see.

Chudly: I WAS saying they WON it in 86, and it was awesome. I'm going to have a beer tonight for L.A. Mike. Big ups to you and your memory for Brutus details. A guy named Brutus just fixed my Toyota. hmmmmm . . ..

Reck: Shit, you gotta know the A Team. It must be syndicated in Ireland, because my Irish coworker knows it, and we gave everyone A Team names. We didn't know what to call the girl, so we call her "Skirt."

Niner: Keydogg is the wateriest shit ever. Good for chugging, shotgunning, bonging, or all three at once. If I walked by that homeless guy, I would have kicked in and had a few with him.

Me reckons that gettin older gives you a reason ta be cantankerous and kick the wankin wiggers in the nads when they don't understand yer cultural references. And iffin yer still got the energy to go to two crapbag parties me sure that you ain't over the hill yet.

Just so you'll feel a little better. I did some research and some great movies were made in our era.

I too find myself longing for the days where at least I felt more creative. I look forward to the day when those whippersnappers realize that they are so aughties that they cry themselves to sleep on their huge pillows.

As someone on the verge of having a kid, I really am having fears about losing any time for creativity.

Also, I can't tell if blogging is a great creative outlet, or an ADHD way to stop me from trying a real creative project.

Hemmingway was a drunk, not a wigger. I think that means there's hope for you yet.

Monster: You and I may be going out on a wigger-nut-kicking bonanza.

Rev: We are cool. Agreed. I'm so relieved you weren't offended by the "wigger word."

Chuck: I like to think that each blog is a part of whole, like a quilt, since they all archive.

Haaaaahaha! I LOVE that 'wanker' is making it's way into the American lingo. That's GOLD. Keep up the good work Dr ken.

I am going through the same thing with younger coworkers...the best question I've gotten so far is "Who is Slash?"

I'm 36 years old Doc, so if you want maybe we can hang out and then I'll feel like the old goat.

Seriously man, you're being a bit hard on yourself.

Anyway, you're not old. I mean, if you are old at 30, that makes me 'almost old' at 28. Fuck aging. I still have a great rack, and I refuse to go down without a fight. Plus, I'll cut a bitch (more lingo from today's youth).

Steph: For you, I'll do my best to ensure that wanker is commonplace in "the states," to the point where Carson Daly is saying it.

Cap.: Yeah, I was fussy that day. My next post will be cheerier.

bottle: Between that comment, your last post, and your profile, that's the third reference you've made about your rack. It must really be something to behold.

Post pics soon or I'll cut you! No, I won't, but seriously, post some booby pics already.