I'm always really tired during my morning drive to work, and sometimes my mind will drift off to a place where a more alert Ken would have stopped the train of thought twelve blocks prior. This morning I got thinking about a television show centered around the coolest Italian kid on the block, Arthur Fonzerelli, played by the Jewish Henry Winkler: "Happy Days."

I should have stopped there, but then I got thinking about the 17 episode failed spin-off from 1982, "Joanie Loves Chachi." For some reason, I just wanted to see how bad it really was, kind of like Ishtar. You can't do that with a show that got cancelled before it built up enough episodes to go into cyndication. Maybe they're on youtube or something, but then I'd have to watch it in ten minute intervals. That would just cheapen Erin Moran's vision in my opinion.

But I didn't stop there. No. On this morning I was thinking how the title kind of left Joanie out to dry. Why does she just love him? Doesn't he love her? Were the creaters thinking of calling it something like Joanie and Chachi Are in Love, but that was just too many syllables? Let's see . . .

Still, I think it makes Joanie look like she's with some jerk who doesn't love her.

Joanie Loves Chachi, But Chachi Can't Even Stand to Be in the Same Room With Her Nowadays.
or

Joanie Loves Chachi, But Chachi Loves Her Sister
or

What do you think, seven readers?

I think I need some books on tape or something for that morning car ride.
Posted by Dr. Kenneth Noisewater at 4:36 PM 16 comments:

. . . You're a teacher, and the first thing you do at work is swing by the science lab to ask a teacher if they have one of those eye washers to get the Rogaine out of your eye.

When did you know you were old/not cool anymore? If you haven't had this realization yet, what event will tip you off?
Posted by Dr. Kenneth Noisewater at 3:49 PM 14 comments:

Never Cook With Oxyclean; It Will Leave You Hollow Inside*

I signed the girlfriend and I up for one of those hands-on cooking classes because we both want to get into cooking more. What's cool about the one I found is that you can sip wine while you take the leaves off of stalks of Thyme and other bullshit tasks, and you get to eat everything when you're done - and everything was absolutely incredible. 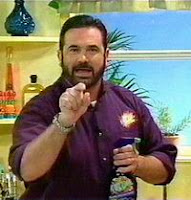 Now, I don't blog about stuff like cooking, specifically. I'm here to tell you that there was a guy there who looked just like the guy from the Oxyclean commercials, he was every bit as intense, and thrice the asshole. First off, he stood across the island from his wife, which I suppose didn't have to be a sign that he was a fuck-o, but then he was throwing uncomfortable digs her way all night. I whispered to Gancey Girlfriend, "Oxyclean over there is a real butthole." She said, "Oxyclean, what the hell does that . . . (as she looked over) . . . oh yeah. He does look like that guy." I've always been good at spotting celebrity twins of people, and I really know I've nailed one when someone barely knows who the celebrity is, looks at the person, and wholeheartedly agrees with me. Love it.

The group consisted of like 7 couples who all knew each other and then us, but everyone else besides Big Oxy was really nice but really yuppie. Sometimes I get self-conscious around people with lots of money, and then a conversation about "the market" breaks out, and I want to stick my head in a food mill** and turn the crank. Am I getting to the age now where I need to start having adult conversations? Am I supposed to get stoked for a guy when he talks about the granite counter tops in his condo? If he were nailing his girlfriend on the counter top, now that's a story, but otherwise I just can't stand that sort of shit.

*Props, another way of saying a prize of nothing, to the reader who tells me what movie this title is in reference to, sort of.

**Just learned about that item that night. I love how general the name is. It's a kitchen item that really doesn't want to get pigeon holed. The other important thing the lady and I took away was . . . Shit, I forgot already, and it was a real good tip, too . . .
Posted by Dr. Kenneth Noisewater at 7:46 PM 24 comments:

Last night, after dinner with the family, my first-grader nephew tried to tell me something from inside the minivan as I said my goodbyes to my parents. He was motioning to me, and then pointing towards his butt. But what could it mean?

He rolled down the window to tell me, sure enough, "You're a butt."
Posted by Dr. Kenneth Noisewater at 9:08 PM 14 comments:

1. I just wrote an article for Starpulse entitled "Top 10 Bands Who an Aging Music Snob Can Begin Admitting He/She Likes" My editor notified me that it got picked up by something called Fark, and I was getting brutalized in the comments section. The people completely missed the point by saying the bands sucked, in that I was admitting that the bands were nerdy, but I was ready to admit I liked them anyway. Oh well, no press is bad press, as they say, and you can read me getting bashed right here.

2. The other night I caught three grunge cover bands of Nirvana, Pearl Jam, and Alice in Chains, and you'll be able to read about my experience very soon at Staythristymedia.com. My buddy told me a great story from his grunge days there that didn't make it into the article, but it will make it here. He was being hoisted up for his one-and-only crowd surf, and some guy said, "This guy's a porker!" From that day forward, he steadily started losing weight because that comment always stayed with him. "He had to use the term porker," my friend still angrily mutters to himself . . .

3. On the Wood Sugars site, I'm going to have a segment where I'll be turning old blogs of mine into videos blogs. if you have any thoughts about which ones would be funny, email me or leave something in the comments.

4. Tonight I chose to write an article about grunge cover bands rather than watch the Super Bowl, but I tuned it just in time to see the dramatic conclusion and the dramatic improvement in the appearance of the wife of Cardinals quarterback Kurt Warner since her Superbowl Appearance. I mean, I don't know if it's really true that blonds have more fun, but chicks with flat tops have just never done it for me, even Sheena Easton.
Posted by Dr. Kenneth Noisewater at 9:31 PM 10 comments: