I just published a Top 10 Acting Performances By Athletes list over a Starpulse.com.

Get a look at the first update of the Liars Club blog in like a year. I'm the only contributer these days with the other three retired just about. Hey, again, if anyone is from Chicago and would like to join up, let me know if you like what you see . . .

'Hang 'Em Up!' and Coat Hangers

This caused the band to have to postpone their next show, but that's not the extent of ailments afflicting this aging band:

"On June 28, Tyler hurt his leg at a concert in Uncasville, Conn., and the band had to postpone seven shows in July. Tyler also battled pneumonia before the tour began in June, while guitarist Joe Perry fought a knee infection," says yahoo news.

Jeez! We'll pay you guys to stop touring! You, you just take care of those knees and play with your grandkids!

I mean, if he fell off a stage in 1973 during a coked up frenzy, I'd pay to see that, but this is just plain sad and embarrassing. This guy is as old as my dad, and I just wouldn't be comfortable with people paying to watch my dad dance around in various cities at his age. My father, a man who jogged 7 miles a day, every day, for most of his adult life, recently tripped over a common coat hanger and scraped the hell out of himself, and I was really worried about him. Where is Liv Tyler while her dad is plummeting onto concert-goers? It seems bad for his health. If my dad were riding around in a tour bus, stopping in various places to run around a stage full of coat hangers, you better believe I'd get him in a half-nelson, take him back to his suburban home, and watch the Cubs break our hearts (our favorite father-son activity) until he came to his senses. 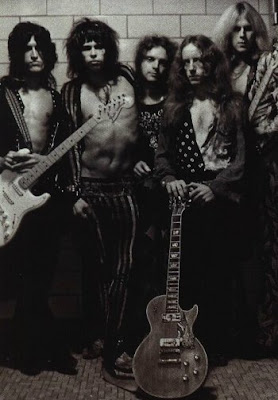 What do you think, readers? Do you say:

A) If they still want to make music and tour, and it's what they enjoy, let them do it for as long as they like.

B) Would you like to say to them, "Stop sucking album-after-album, night-after-night because you haven't been any good in literally over twenty years, and that's debatable. You haven't been great in over thirty years, equally debatable, and the more you hang around sucking, the harder it is to like your good stuff."
Posted by Dr. Kenneth Noisewater at 3:01 PM 7 comments: