My Day Up Until Now

I used a website called Random Subject Prompts and the one that popped up was: "Write about your day so far." So, let's do that.

5:30AM - I wake up to hear the cutest voice ever saying "dada" in the next room. Sorry to disappoint you, Little Man, but it's Momma's turn; we switch off mornings. I couldn't get back to sleep so I picked up where I left off in my Jim Henson biography. Basically that dude changed the face of children's television and pretty much invented it in terms of the format we still see today. Previous puppet shows on television had a little stage where the puppets moved about, but what he and his female partner did in the 1950's (while he was in college) was look at a little monitor and let that space that the viewers could see be the boundaries of the stage. He was the first to let the puppets themselves be the stars of the show and brought those characters to life.

I was trying to explain to Mrs. Noisewater when we were watching a modern "Sesame Street" that it was no good because the kids in the show were clearly actors. Corny as all hell. Back in the 1970's it was an organic experience of the kids just having conversations with the puppets as if they were real people. The kiddos reacted to what the puppet was saying, and the puppeteer fed off of the spontaneity and whimsy that the children brought to the scene. This scene below is the best example of what I'm talking about. The girl had her little joke and was cracking herself up, so Jim made Kermit pretend to get all frustrated. And then the unexpected pull at the heart strings at the end brings it all home for a truly magic moment.

7:00AM - Fell back asleep eventually and got up feeling like a million bucks. 7AM is really sleeping in during the baby days. I made myself a French press cup of coffee with my birthday gift of a press and a grinder. If you don't have one, I recommend it. I'm amped with fuel for the whole day, and I just kind of love the whole process of brewing it.

9:00AM - Went for a run with my buddy Night Train who lives down the street. He is training for his first marathon in the Spring in Big Sur, California, and I have my 2nd one in September here in Chicago. Topics discussed that I can remember were: Parenting styles, break ups, our upcoming Man Night get together with friends, whether or not Tom Brady is faking an injury to play head games with his opponents, and what makes an ideal roommate. If you're anything like me, you do your best thinking when you run, and it really helps to have someone with you to hash out all of life's problems and reflect on the minutia of all things off of the running path.

10:30AM - Mrs. Noisewater was meeting a friend at the Women's March, and she made this terrific sign. The other side has a clock that says "Time's Up." What is funny is that she showed the boy the typical way of protesting with a sign by shaking it up and down and doing a ra-ra chant, so Baby Noisewater did the same and babbled about what may or may not have been about women's rights but more likely was about Thomas the Train and his rights in the rail yard. 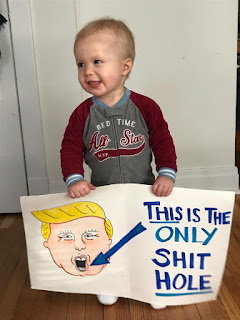 12:10 - We are currently on a major budget restriction, trying to save for a more proper home for the family, somewhere with in-unit washer/dryer, a dishwasher, and a proper bedroom for the Little Man. For this entire month we are tracking everything we spend on a spreadsheet. If either of us buys something, even a can of soda at the gas station, it has to go onto our spreadsheet. Believe it or not, it really does make you more conscious of what you need and don't need to buy. Hence, I opted for a free activity for the baby and took him to the library. Here he is playing with a random girl that was there. He is so social, but mostly with the ladies. It was impressive that he recognized that his partner had more advanced fine motor skills, so he opted to be the guy who fetched the bricks for her to carefully put into place. He has the brute strength and cute strength.

And that about takes us to the current time. Tonight we will stay in and continue to spend zero dollars. There is some movie about a mute gal falling for a merman that is supposed to be quite good, so we may stream that one free and illegally.

I rather liked this writing activity because when you take the time to write about your day, you find yourself a little more convinced that it was all time well spent.

1. I like that thus far Baby Noisewater is not too obsessed with the television. Something will catch his eye, he will point and get excited, and then he moves onto playing with toys or looking at books. When the local news is on it always seems to be about disasters.

Cut to a train that has gone off the rails with numerous casualties and Erik starts stomping his feet, smiling, and saying "Choo! Choo!"

Then in another neighborhood in Chicago we have a bus accident, and Erik looks my way all wide eyed with a big grin saying, "Bus!"

You can't seem to get through a local news broadcast without a fire somewhere, so Baby Noisewater points and whispers to me "hot." It's adorable how he always whispers that one with a cautionary tone. His nanny taught him that word and says it's the most important word to teach a baby.

The point is that it is, of course, tragic what is happening all over our fine city every day, but Erik has no concept of that aspect. It's not like he is hoping for these tragedies to happen, but he is certainly pumped when he sees some of his favorite stuff. All he knows is that he loves trains, buses, and to warn people about hot stuff. The young man has a way of lightening the mood anywhere he goes, and that's one thing we dig about him around here. I'm not saying he should be part of the news team on a little split screen throwing in his two cents on channel seven, but I'm not NOT saying it.

2. My wife pointed out that this rag I call my blog is steadily becoming a dad blog, and in a lot of ways she is right. But before I move onto something else, one more thing about a children's book I have been reading a million-gizzilion times, "Green Eggs and Ham." And incidentally, a good parenting tip is to learn to paraphrase books after a while. You can really just point out one quick thing on each page and move on if that bed time is quickly approaching or if you're just plain sick of reading the same book for the umpteenth time. After a while I'm like the magician in one of my favorite Patton Oswald bits.

I got thinking about old Sam-I-Am in "Green Eggs and Ham," and that dude really should get some sort of lifetime achievement award in the area of sales. You take a customer who absolutely hates green eggs and ham, and this persistent little fellow tries every angle under the sun to see if there is a scenario where his customer will like his product, be it in a plane, a train, in a tree, or with a goat. The goat always gets me. How is eating something I hate with a stinky-ass goat sweetening the deal? It just goes to show you that to make a tough sale you got to try every angle. That's what made him the G.O.A.T. salesman. Get it?