Something occurred to me yesterday as a hairy guy rubbed my back . . . 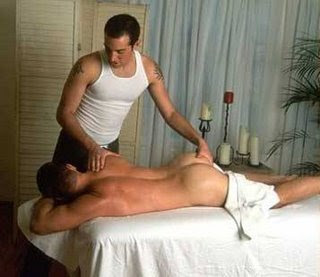 . . . and that is this: Once you zone out, the sex of the masseuse does not matter. Sure, the first few minutes of a dude lathering me up in lotion was a little off putting. Yes, when he'd really dig into my pressure points, he'd let out a heavy breath, and that was a little gross. However, he let me bring a CD, so by track three of Radiohead's The Bends, I was in my own little world.

I should explain. This was my Polish immigrant landlord giving me a rub down. Just kidding. Actually, it was a complimentary massage I got after my last session of physical therapy for my pinkie.

So, what else is going on with The Gancer besides deep tissue, homoerotic massages?

1. I'm teaching again, and loving it again.
2. I'm still trying to write whenever I can. I'm really pleased with how my Goofy Rock Names piece came out.

3. This summer I'm going to try to ride my bike and play volleyball* for more hours than I drink.
4. I've been dating the same gal for almost half a year.
5. I went to the Liar's Club last night. The Naked Guy was there, and I really wanted some friends, who were first-timers, to see him flop around for a bit. To get him to do the naked dance, one needs to request his song. It wasn't looking good, because there was some guest DJ who only played techno shit. I tried to put in a request with him, but he pretended not to notice me while he fiddled with his knobs and played shit song after shit song. My buddy said the music sounded like it was made by a robot who had to go to rehab for being a sucky robot. I said to Naked Guy, "Hey, Naked Guy. You going to get good and naked this evening?" To which he replied, "I don't think they have a techno version of my song," his song being It's Getting Hot in Herre by Nelly. Alas, there would be no nakedness.

*I had to offset the other picture with this one, so everyone can enjoy a butt, except Morrissey, who's asexual, but he doesn't read anymore. The picture reminds me of an Asian Indian gal who was always in the same league that my buddy, HLP, and I played in. When she'd get ready to return opposing serves, she'd bend over, and her rear end would pop up ever so slightly. HLP would say, "she's presenting." I swear we weren't perving on her, much, because everyone would notice this, boys and girls alike.
Posted by Dr. Kenneth Noisewater at 10:02 AM

well good doctor, all i have to say is that i'm glad to hear you're comfortable enough with your manhood to get a good rubdown by a dude.

...and my, what nice little behind that man has in the above picture.

I love that you went equal opportunity with the pictures. That is awesome!

Where the hell did you find that photo?

Is it just me, or does masseuse' guy (in the picture) have a bit of a wandering finger?

hehehe I've never had a massage and I have to admit, I'd prefer a man's hands on me.

Wait... does that make me filthy?

I wonder if I'd get all squelchy.

Log: That guy does have a well sculpted butt. I'm man enough to admit it.

Radio: Hey, a little something for everyone here at The Gancer.

Cherry: It was either google images or The Manhole. I forget which.

Jake: Yes! It is headed for the cavern.

Smack: That doesn't make you a horn-dogg; your blog does.

Ahh . . . The Bends. The only good Radiohead album, in my opinion.

(Bet that ruffles a few feathers!)

hm, maybe i should go get my [thrice] broken toe looked at in the hopes that a large strange man will rub me.

i tried reading but i wound up staring at that chicks ass for about 20 minutes. thank you.

A mild, sporadic, healthy level of Homoerotica is okay. Since I was a teen my guy friends and I always play these border-line "gay games"... it's all fun and no one has crossed the line... yet! That'd be an awkward day! Oh and thx much for the gratuitous ass shot!

I used to get these great accupressure messages from this dude who was a chiropractor and a bodybuilder.

I really don't care about the gender of the masseuse--just as long as they are really strong and they know what they are doing.

Actually, maybe I marginally prefer a dude because then there is no sexual tension.

Plus we can talk about dude stuff...

God I'd have to do a lot of biking and bump, set, spiking to balance out how much I drink.

Dude, duuuude! I like the second butt pic much better....

Nothing wrong with music made by robots, although I do not approve if they are sucky robots.

Also, the massage photo made me cry a little.

Charm: Only a SLIGHT case of yellow (brown?) fever, I swear.

Inchy: I wouldn't say their only good one, but I will say I like that era the best. They are too artsy-fartsy now.

Jersey: I'm sure you can find lots of men to fill that void, but I can't guarantee any of them would help the toe.

Chud: There are lots of subtleties in that can of hers . . .

Zen: You guys probably lay on the "dude talk" thick, to overcompensate for the fact that a guy is rubbing another guy.

Seq: It won't be easy, but my body will thank me.

blackdog: Yes, the "wandering finger" shot, as Jake called it, is a bit yucky. Sorry.

Frank: Daft Punk are non-sucky robots. The music at LC on Saturday was by the robots Daft Punk used to beat up in the high school locker room.

Since women give such crappy back massages, I'm thinking about becoming gay for just as long as it takes to get a back rub, and then, once he starts venturing downstairs, I'll get up and leave...right after he finishes performing oral.

I had an old lady masseuse once that kept going "mmmmmmm" while she was rubbing me and then she started rubbing my butt, which is ticklish. It was an interesting experience.

I remember an I Love Lucy episode where Lucy and Ethel stumble upon John Wayne getting an aggressive massage from some he man.There was trouble and then every one was happy and the Ricardo's made up and slept in separate beds. No make up sex in the fifties I suppose...I have not had a male on male massage, but I did have a massage once from a woman that was as short and stout as a Olde English Bulldog. I was aroused and could have been coaxed into a happy ending but this was in a foreign country so this story must stay in the unnamed country.

That was NOT a photo I expected to see from you, Gance. [Cherry] yes...but not you.

But hey...it's always good to cater to the gays. We have more disposable income!

whoa there coco, I think the old lady was into it bit too much! Now if I ever got a chance to massage your butt, oh boy...

We can get free massages at work, but I never go because I'm too afraid I'll get a boner.

Oh Blackdog, butt massages just make me laugh. For the real fun you have to massage my other parts :O)

Why the hell is the LC resorting to bad techno? What part of dive bar with a shriner theme don't they understand?

BTW, I think you fantasize that HLP is the one in the wife beat.

"Hey, how about those Lakers! Uh--you know that thing you did last time, where you stuck your hand in my ass crack and adjusted my tailbone??"

Pistols: That sounds like a great plan. Want a back rub?

Coconut: I call you ticklebutt. Kinda sounds like coconut.

Josh: I'm picturing you getting a rub down from a fire hydrant with hair.

Blackdog: My site now leads the nation in talking about butt massages.

Fort: There's no shame in that, because it's rewarding for the masseuse to know that you REALLY like his/her work.

Nut: Hey, are you two blog flirting or something? Why don't both of you massage MY butt. NOW!

Classy: It was a promotional night for some liquor, and they brought their own crappy DJ's. And, what part of HETEROsexual Life Partner are you not getting here? Yes, we're a little gay for each other, but in a totally straight way. Make sense?

Zen: THAT was the best comment ever. I'd like to honor that one at an awards ceremony for comments: The Commies. Okay, the name needs work . . .

zen's comment had me hand in ass crack attempting to sdjust my tailbone. i don't think i'd pay anyone for that... it starts to get hurtsome.

You have to find the right specialist--and cherish that dude; always making sure to buy him a bottle of Hennessy every Christmas.

You can get massaged by anybody you want, man, but do we have to see it happening? Or maybe that's not you.

Now that you dipping your therapied pinkie into the realm of the gay man, you will need to blog more about Celine Dion.

Zen: Henessey? Is your masseuse a black guy?

Michael: I wish I was that dude in the picture, and by that I mean I wish I had a body like him, not that I want a dude with his thumb in my butt.

Uncle: Hmmmm. Pinkies, gay men, and Celine Dion? I'm not sure if I see the connection, but then again, I kind of do, somehow.