Words of the Day Are Fun When They're Swears!

Today's word of the day is muthafucka.  I realize you may be thinking a few things.

1. I spelled it wrong.  That's intentional.  If you say motherfucker, those two "R" sounds are all wrong for how this word should be used in this sense.

2. Also, today's word of the day is to be used to start a sentence. 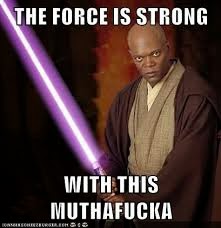 "Muthafucka, I already told you that shit!"

"Muthafucka, where the damn milk at?"

I just asked Mrs. Noisewater to start a sentence with the word of the day.  I said, "Quick, say a sentence that starts with muthafucka.  Her first attempt was this:

I let her know that her sentence made no sense and would need a verb.  Her next attempt was excellent, though.

"Muthafucka tried to rob me!"

I rather like that.  It tells a story.  He tried to rob her, which implies that he failed and she likely fucked that muthafucka up!

Try a sentence with the word of the day in the comments section, readers.  I'm confident you will find it to be a good deal of fun.  Also, try the word of the day on a friend and let me know how they react.
Posted by Dr. Kenneth Noisewater at 5:57 PM 6 comments:

I got a text the other morning while getting ready for work that said "Oderus is dead?"  I rushed to my computer to see if it were so, and sure enough, Dave Brockie, who portrays Oderus Urungus in Gwar, was pronounced dead at the age of 50.  I always give my lady a kiss goodbye before heading off to work, and on this day when I told her that Oderus was dead, she said in a sad tone "Oh, I'm sorry."  I was really touched by her saying it like that because his music is silly, his costume with the giant dick dangling down is disgusting, but she knows that I think he was one of the funniest and quick-witted rockers ever.

In case you don't know, Gwar is a band that dresses up in elaborate costumes and claim to be from another planet, trapped here on earth where they view humans as inferior morons that they like to murder on stage.  I saw them kill Snookie and her aborted fetus at a show a couple of years ago.  I saw one video where they kill the pope.  Anyone offended by this has to be a complete idiot because it's all done very tongue and cheek.

Hey, here they are appearing on Joan Rivers back when they used vague European accents.

And here is Oderus on the Fox News show "Red Eye" where he did regular appearances as an interplanetary correspondent.

My first experience with Gwar was watching the "Live from Antarctica" at a buddy's house, and I still remember the incomparable Oderus saying this:


You humans aren't a bad lot.  So long as you know your place.  And that place is face down in the dirt, digging your own grave with the bridge of your nose, with my dick up your butt.  Thank you very much.

It's sad to see him go, especially because there really isn't a Gwar without him.  It's like the Jimmy Hendrix Experience without Jimmy Hendrix, and no - that's not an exaggeration.

I had a few too many and ended up at the Burrito place that I went to when I had too many so long ago.  The same guy was working the counter.  I said to him, "Wow, you're still here.  You were here like 7 or 8 years ago, and you look the same!"  He said he had been there 14 years.

Good lord.  I have been living and drinking in the city that long.

I had one of those days at work yesterday where I wasn't feeling well, and I was being pulled in a thousand directions and never felt like I could get each task done right before getting yanked into the next more urgent thing.  The whole time I knew the day would be capped off with the wake of my friend's mom who just died.

And wakes are not fun.  So I'm mingling through the wake, and I'm not a strong mingler to begin with, but put a dead person in the room and I'm twice as bad.  It's really hard because you see someone you haven't seen in a while, and you blurt out how good it is to see them and you got a big smile, but then you catch yourself looking too happy, so you dial it back down with a frown and smooth it over with something like "I just wish it wasn't under these circumstances."  I could maybe blame it on being sick, but it's probably more about the crippling fear of me and everyone I care about getting older and dying. I left thinking what a terrible performance I put on in there.  I know I'm as sad as just about anyone in there, but while I'm in there I can't get over my own shit to just act normal.  So I cried in the parking lot a little.

Anyway, to sum up, or if you just skimmed to the end:

Paragraph One: Dr. Ken bitches about having a bad day at work and feeling sick, as if that doesn't happen to everyone.

Paragraph Two: Dr. Ken's dear mother of his good friend died, and she was the sweetest woman you could ever know and baked the world's best chocolate chip cookies that the whole block tried in vane to duplicate.  She left us far too early and she will be missed.  And nobody knows how to act at a wake.

Before I go any further here, let me just say that I don't hate Christianity or any other religion.  There are just some things about a few of the beliefs and practices that I think are silly, and I think we all think that to some degree, don't we?  I guess it's like anything else where it's not the the religion itself that sucks, it's the people who act a certain way that suck.  Kind of like how we don't hate the Yankees nearly as much as we hate their fans, or whatever sports team we choose to hate.

For one thing, Lent bothers me.

I'm a pretty big athiest/agnostic.  And I'm not happy about it or smug about it, rubbing it in people's faces and calling them dumb for believing in stuff.  Believe me when I say that I envy them for having belief in a higher power.  How can I not be a little jealous when all I really believe is that we can have a few fun moments in life but eventually we die and rot, and that's about it.  Dying and rotting.

But if I did believe that there was a Heaven and a Hell, and if living a good life and following all the rules sent me to heaven, and living a crappy one meant going to hell, I'm pretty sure I would be the best Christian the world has ever saw.

So heaven would have to be so awesome that we couldn't even possibly imagine it.  I suppose you would wake up at around 12PM every day, the weather would be about like San Diego, you are nailing a different super model every day before getting out of bed (maybe you scroll through a list and pick one out of on your heaven phone), you have an appointment to play some two-on-two beach volleyball with Malcolm X (and it turns out he is a very cool guy), then you go to the best barbecue ever where you roast a unicorn like a pig roast, and it's the best unicorn you ever ate that whole year.  Then you sit around a campfire with some more great dead people, John Lennon is there with a guitar, and everyone has a sing-a-long while drinking craft beers from the finest of Heaven microbreweries.  And you probably meet another super model there and have more insane sex that you never tried, perhaps in zero gravity or something.  Then the next day makes that whole bookended with super models day look completely shitty.

Now, if I'm a Christian and that is awaiting me if I just follow some simple rules, however strange they may sound, I have to believe I'm following them to a T because Hell doesn't sound to good.

Your standard day in Hell starts with being woken up by the bullhorn demon (who has a giant bullhorn for a face) at 5:30AM after sleeping for 25 minutes.  And you slept standing up.  You're immediately ushered with into the line at the DMV where you will be pushed and shoved trying to avoid the fires in the middle of the office, because there are annoying fucking fires everywhere in fucking Hell.  When you finally get to the front of the line, the fat crabby demon working the counter tells you that you don't have right document you need for your Hell driver's license, so you will have to be tortured for the remainder of the day and get up the next day to get in line again.  And torture has got to be pretty bad if hell itself is constantly totally awful.  I'm thinking that you are tied up in a room somewhere, naked, and there are demons with hot pokers, like how people brand cows, and they're playing a movie of the shitty life you led, laughing at each of the mistakes you made, and poking you at those moments, like some kind of demented and painful drinking game.  And today's clips are exclusively from your miserable high school experience.  With close ups of your acne and lots of rewinding for particularly horrible moments.

So if that's what heaven is like and that's what hell is like, I got to believe I'm making some sort of major sacrifice during Lent.  I would have nine or ten things to give up - some things that would make the big dogs upstairs quite pleased with me.  Something that would bump me ahead of a few people.  Maybe I would give up hitting the snooze button, masturbation, sugar, alcohol, skipping work outs, and just about anything else that is bad for me.  And you know what?  While I'm at it, maybe I'll do whatever else it says I should do in the bible all year round if it means I can go to heaven to play beach volleyball with Malcolm X and avoid going to that DMV line in hell.


I'll tell you what I would NOT do during Lent if I believed in Christianity: Give up Snickers bar.  Not giving up chocolate bars, chocolate in general, or sweets in general.  Nope.  Too hard.  This guy just gave up one specific brand of candy bar.  And this asshole will eat Baby Ruth's, Mounds, and Watchamacallits all month long.  And you know what?  If someone offered him a fun size Snickers, he would probably just say "fuck it" and eat the thing and make an excuse like, "Well, it's just a fun size, after all.  Jesus will understand that what I really gave up was the full size one.  Sure, he was nailed to a cross after dragging the damn thing 200 yards while being whipped, and I gave up my full size Snickers.  He will be quite pleased with my sacrifice."


So there you have it.  I don't believe in much of anything, but I like to think that if I were a Christian, I would be a better one than the Snickers bar guy.  That's all I'm saying.
Posted by Dr. Kenneth Noisewater at 12:35 AM 9 comments: