We Need a More Manly Term For Cuddling 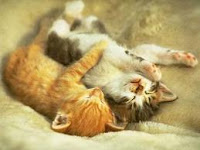 It really is impossible to sound cool when you're a guy saying that word: Cuddlng. Can you really see yourself saying to a buddy, "Sunday was amazing. My girl and I just stayed in bed all day and cuddled like crazy!" Not too cool sounding, right? But, most guys secretly like to engage in that act, at least that's what I have found through my informal poling. Now, while it is true that some fellas just like to nuzzle up in there because it sometimes leads to sex, more likely the man cuddles out of instinct (not unlike the cats pictured) and the sex is just something that pops up, so to speak.

So, here at The Gancer, I'm going to try out some new terms, and I need you, my Seven Readers, to tell me which one is the best.

Smush: Someone told me that is what the kids on "The Jersey Shore" call it, but when I looked it up, it's a term they use for coitus. So, that won't work, and it's no more manly a term than cuddling anyway.

Fusion: I think this could really work. Let's see: "We got it on for like an hour, and then we just lied in bed fusing until the sun came up." Hey, you know, that's not too bad!!

ou can think of a better one, let me know in the comments. Otherwise, we're going with fusion. And here's your mission, Seven Readers: See if you can sneak this new term into a blog post or a conversation and come by and let me know if you've managed to do so. Extra credit coming your way if you get a hold of a special someone and give him or her a fuse for old Dr. Ken.
Posted by Dr. Kenneth Noisewater at 3:21 PM

I dunno. Those are my contributions. Since I don't fuse, snargle, or waggle very often it matters not to me.

haha i like how you suggested smush and snuggle and immediately dismissed them, narrowing it down to fusion by default.

Snargle sounds a LITTLE tougher. Maybe . . . I think that's how Gargamel from the Smurfs makes love.

I believe the word "canoodle" is an approximate synonym. "Fusing" sounds like a word for coitus.

Gorilla: I thought about canoodle, but I think it's too cutesy.

a real man would lie and tell his friends he was bonin' the day away. if you can't get away with that, then might i suggest "cupping?" sort of creating the image of vigorous spooning, but without the sissy S and OOO noises

I think if you always refer to it as "fuckin' cuddling," it's more manly.

Isn't "cupping" one of those scary things doctors used to do to people when the leaches weren't getting results?

I disagree about "snuggling." I wouldn't be caught dead cuddling, but I'm all about the snuggling. You just have to snuggle with confidence and authority, is all. Own your snuggling. Solid.

Beck: Ooh. Yeah. Sneak a swear in there.

5 Grand: Forgot about cupping and spooning. You're right about cuddling like a man - it can be done.

Cupping has another sexual meaning already, I wouldn't suggest using that one...