The Two Crazy Guys We Met During Date Night

Mrs. Noisewater and I have a new plan where we go on a date night and then immediately lock in the next one. That way we don't ever let too much time go by between dates. It is kind of like when you get a haircut and then book the following appointment when you pay. We also have a rule where we don't meet up for drinks with anyone else. It's a night just for us. That is, unless we meet some weirdos organically, which often happens when it's a Noisewater date night . . .

Dinner was lovely. The place had a mescal lounge. It was my first experience drinking mezcal, and I enjoyed the smokey tequila flavor. It got a nice fire going in my belly. 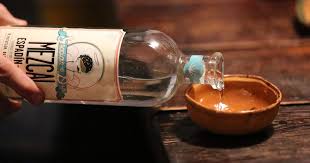 After dinner we tried to go to a pop-up bar that was modeled after the TV show "Stranger Things." The line was pretty long, so we decided that paying a babysitter while waiting for anything was not a good use of our money and time. I suggested a rock n' roll bar that I've been meaning to try, and my wife is the coolest so she agreed. There was live music and a cover, and I didn't like what I was seeing and hearing. The singer was a white guy with cornrows, and while they were trying awfully hard, it just sounded pretty shitty. I asked the guy at the door what the band was all about, and he was not even trying to sell them. He said, "I don't know, man. They're trying to be punk, but it's not really punk." As he said this he was lifting his shirt and scratching his big bare belly. We took belly-man at his word and decided not to go in. The problem was there were no bars in the immediate area. 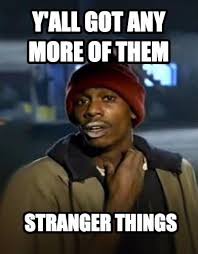 We decided to call an Uber from a nearby Mexican restaurant that smelled like a sewer. Probably not a good idea to eat there, but we did knock back two frothy and refreshing margaritas. With time running out on the babysitter, we decided to ride back to a spot where we could walk home. There we met a hilarious drunk dude. I can't exactly remember how it is that we got talking, but it might have been about the preseason Bears game since that was on. This dude was hammered and sitting at the bar slurring stories to me while his wife was more upbeat and bouncing around the bar from person-to-person telling other stories, and in one case the same story she had just told Mrs. Noisewater.

Drunk dude told me that his wife was crazy and that she held a knife up to his throat the other night. He said he is 59 and his wife is much younger. He called her a grave robber. We got talking about our kids, and he incredulously informed me that his 12-year-old daughter was receiving dick-pics from her classmates. "Do they even have pubes at that age," he asked me, outraged. I told him that I didn't get a thicket down there until a year or two after that, but it's possible. He then told me that the same daughter and her friends drank/ate all of the jello shots at a recent block party. I guess these kids were pretty hammered, and all the parents were pissed, as I'm sure you can imagine. Most of what this dude said had me laughing, but this was the hardest I laughed. 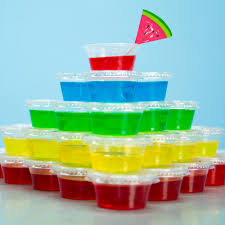 Drunk dude then asked what myself and Mrs. Noisewater were drinking. I started to tell him, but then Mrs. Noisewater suggested we get going. That was a fantastic idea because I would have listened to goofy stories from that guy all night, especially if he was buying, and I felt hungover enough the next day as it was.

So, get out for a date nights with your special someone. And also, talk to some weirdos at bars. Weirdos at bars have the best stories.
Posted by Dr. Kenneth Noisewater at 7:55 PM 10 comments:

I thought I would help other parents out there by letting you all know which books have been helpful when putting Baby Erik to sleep and which ones totally suck. Some of the pictures came in sideways, but whatever. My web master is on vacation. 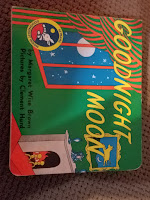 "Goodnight Moon" was written in the 1940's, and it has been used steadily by parents to put kids to sleep all these years for a reason. All babies seem to love it, I am finding in my limited exposure to my baby and a few others. You basically say goodnight to everything in the "great green room," and at one point there is a little old lady whispering "hush." When I say hush and put my finger up in the hush-motion, Erik always looks up to me for that part. It's all about routines for babies when you're putting them down to sleep, but sometimes I mix it up and go with the ZZ Top version and say she's the little old lady just looking for some tush. It's also all about keeping yourself sane.


This kid in "The Giving Tree" is a real turd, right? Take, take, take. That's all he ever does. The rat bastard robs the tree of everything over the years to the point where the tree is just a stump and the boy sits his now old ass down on the tree when the tree has nothing else left to offer. You could just as easily have called it "The Taking Boy." 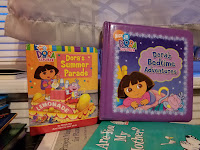 I have two books with Dora the Explorer. They're cute, and I like to expose the young man to a little bit of Spanish. I will say there are a few too many words, which will lead to the baby trying to turn the page or reach for another book. This is when you have to make up a more abbreviated narrative for each page, or if you're a psycho like me, make a sick joke. For example, you'll see the picture of Dora and Boots the monkey having a sleepover, but look at the evil and maybe a little drunk look on that monkey. He's up to something just as the mom is turning out the lights. Sometimes for kicks I'll say, "Mom, don't turn out the lights for a human and monkey sleepover! That's how AIDS got started!" Yeah, I'm nuts. Sorry. Then you will see Dora and her monkey friend picking lemons to make lemonade while the evil little weasel with the lone ranger mask, Swiper, is stealing the lemons. This is when every once in a while I will say, "So for stealing the lemons, boots held him down while Dora beat Swiper about the head shoulders with a bicycle pump.

Let's move onto a serious note. This is the book that you will read to your kid, and you will cry. Every single time. The worst of these times for me was when Mrs. Noisewater was getting her appendix out right around Christmas time only a few months after Baby Erik was born. My family was nice enough to hold off on the Christmas activities until she was out of the hospital and feeling better. So, one night Erik and I had just left the hospital to go home, go to bed, and come in the next morning. When I read this line to him I cried like no other:

just lift up your face, feel the wind in your hair.
That's me, my sweet baby, my love is right there."

I since have bought this book for two other new parent friends of mine, and they loved it too. I highly recommend this one.

A good friend of mine got Erik this Star Wars book with original artist renderings of what they envisioned the movie would look like. I spoke earlier about having to make up quick things to say when there are too many words, and here is another great example. There's almost more space for words than pictures. So, for example, in the picture above I will say, "And then the ungrateful Luke Skywalker so hastily attacks his father who had just so generously offered to rule the galaxy side-by-side with his only son." I like to give the story that daddy perspective.

Here is a classic that I also read as a little kid. I think it's cute that Alexander is obsessed with Australia. But I will say, he seems like somewhat of the brooding emo pessimist type. I would wager he listened to The Smiths in his teenage years. He's a good kid.


Here is the takeaway from "Green Eggs and Ham": Sam-I-Am is the best salesman ever. He approaches a customer with a product that the customer completely hates and tries every angle to find a way to make it work for the customer, be it eating those eggs on a plane, on a boat, or (my favorite), with a goat. Cracks me up every time. What would a goat bring to the table aside from spitting, howling, and smelling bad? Yet he tries that angle anyway to exhaust all the possibilities. Without a doubt the salesman of the year over there and Green Eggs and Ham, INC. 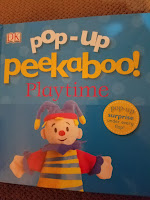 Kids go bananas over pop-up books, but that is also the problem. In their excitement they will beat the shit out of pop-up books. Just look at that once mighty dinosaur. No match for Erik's fat finger beat-down. 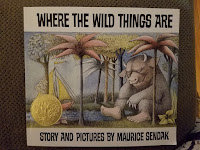 Here is another classic, "Where the Wild Things Are." And here is another pretty awful little kid, chasing the dog around the house with a God damned fork, and hammering nails in the wall. So, his mother sends him off to bed with no supper, which is when he envisions going off to an imaginary land with monsters. There he becomes their king and sends them off to bed without their supper. Jeez. Rather spiteful, right?

We have many friends who got us Chicago related books, and those are a lot of fun for a baby growing up in the Windy City. The Cubs one is especially fun, and that "C Is For Chicago" one has amazing drawings. I only read the Cubs one after a win. S is for "sore loser." 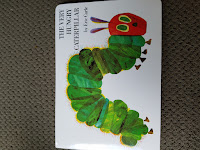 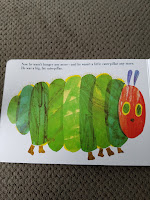 I'm sure many of you remember "The Very Hungry Caterpillar." I had not seen it in a number of years and got to the end to find the last page was the one on the right. So, that's it? The caterpillar ate too damn much and got fat? That's the lesson for the youngsters out there? Don't eat like a pig or you'll be a fat-assed caterpillar of a kid? No, that's not how it ends. The final page where he becomes a butterfly was ripped out by my nephew. It's a darker and more cautionary tale without that last part. 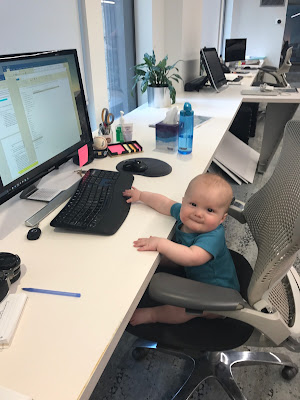 And here you see Erik at his office carefully helping his dad write this blog during his lunch break. It was no-pants Friday at his work. They have fun days like that over there. Hope you enjoyed the book reviews and it can be helpful to some of you with kiddos of your own.

Any other children's books recommendations that you care to leave in the comments?
Posted by Dr. Kenneth Noisewater at 11:14 AM 8 comments: