I got bad news from my best buddy (Heterosexual Life Partner) the other day that his Uncle Bill is in critical condition after a serious accident.  He was loading his truck for work and either fell or had a seizure, and the end result was a stroke that has left him incapacitated.  He can now only move his left arm and toes.  If his condition doesn't improve by next week his kids will have to decide whether or not to pull him off life support.  His youngest just graduated high school.

The first time I met Uncle Bill we were at a gathering in a backyard with "Dazed and Confused" projected onto the garage.  Bill, myself, and some others were talking through the whole thing, which I think bothered some folks, but the fact is I've seen it twenty times and Bill lived it.  I have always loved rock music from the 1970's, and Bill is that guy who saw every awesome band from that era.  So, when you put the two of us together, you're going to have long discussions about rock music that go about like this:

Bill: "Sure did.  Saw them on the (insert seminal work of given artist here) tour.

Another time I saw him he was fresh off a divorce and dancing his face off at The Liars Club, the best bar on planet earth.  The dude is always smiling and just always fun to be around.  When my buddy told me the news about him, I was devastated.  I asked if there is anything I can do, and knowing that I'm not a religious man and I don't know shit about praying, my buddy told me to play some Zeppelin for him.  So that's what I'm doing now. 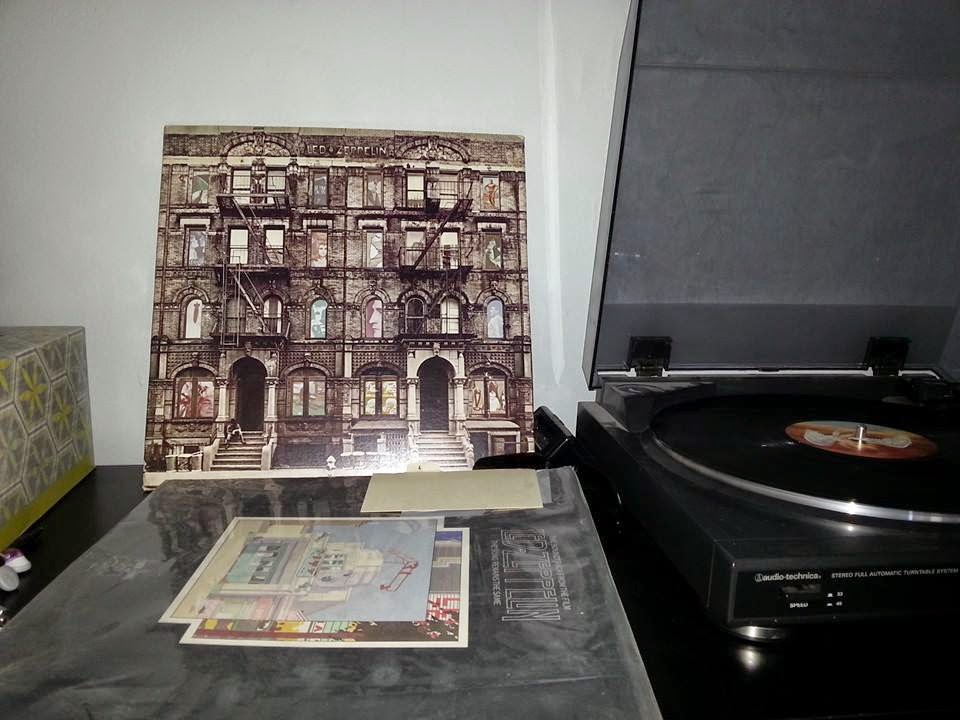 Hear those opening chords on "Ten Years Gone," go towards (or is it away from?) the light, and pull yourself out of this, Uncle Bill.  Your family needs you, and we all want to see you smiling and dancing again.

So I had this dream last night that my girlfriend and I were desperately trying to screw in this giant grotto style public pool type place, but we kept getting interrupted.  It was as if it had to get done or something bad was going to happen.  And at one point I looked down to see that I had way too much chest hair.  Truth be told, I'm a bit of a hairless mammal, so it was a little scary for me.

In other news, when I went to pick up my contacts today, I dropped into the record store across the street that I usually go to when I see the eye doctor.  They specialize in dance/house type music so their rock collection is very limited.  They play their shitty house music the whole time, and when I was done selecting my $13.10 worth of records, I found myself waiting at the register with no one to ring me up for a couple minutes.  So I peeked into the back room to find three employees hanging out and not working, and I had to interrupt them and ask if someone could actually do two minutes of work and ring up my purchase.

Yup.  That's what your typical record shop in Chicago is like.  They're snobs, they are way over staffed with guys doing nothing, and they suck.  When I did that job, I loved every single shift.  It was the best job in the world - listening to music all day and talking about it all day.  Real jobs are hard, and that's what they need to realize.  The record shop gig is fun and really, really easy, but you do have to staff one of the three guys to be not in the back room so that they can spot when a customer is trying to spend money in the shop.  That's one of the only rules.

Okay.  I gotta go spin my $13.10 of music that was well spent, even if the proprietors didn't make it easy for me to spend it.
Posted by Dr. Kenneth Noisewater at 7:50 PM 6 comments:

My lady and I were at brunch the other day, and I looked up at her to see that her eyes were watering and she looked like she might be having a stroke.  She said the hot sauce was way, way too hot.  She started coughing and sweating, and I was getting a little worried.  I tried just a dab of the stuff, and yes, it was the hottest damn stuff ever.

The hot sauce came in a little metal dish, like the ones you get ketchup in.  It came with no explanation of what it was and how hot it was.  There was only one explanation: It must have been the infamous ghost pepper.

The waiter, in between apologies and delivering milk to her, said that it was, in fact, ghost pepper hot sauce.  Apparently some customers complained that the hot sauce was hot enough.  So the solution was to get the hottest stuff in the free world and hand it off to customers with no warning?  Seems like they could have dialed up the hotness slightly to make some people happy instead of waging secretive chemical warfare upon all the rest of their patrons.

What do you think?
Posted by Dr. Kenneth Noisewater at 10:03 AM 4 comments: