This might have been my longest time in between entries since I started back in 2005, and there is only one thing that could get me motivated to start writing again . . . Making fun of someone!  It's one of the major flaws of bloggers; the fact that we observe people, make mental notes of all the crap they tell us, and mentally construct blog posts where we will make fun of them at a later date.  But as Crazy Eyes (the subject of this post) cornered me at the bar when I was all alone with no escape, I knew she secured herself a blog post in the very near future.

Crazy Eyes is a barfly.  There's just no nicer way to say it.  She works at the bar where my buddy, Southie, has bar tended every Friday night for the last 13 years, and I'm pretty sure Crazy Eyes hasn't missed a Friday in all those years.  I had nothing going on last night so I figured I would go visit Southie who ended up being quite busy in there so he wasn't able to hang out with me much.  Ordinarily being alone at a bar isn't a big deal, but on this warm Chicago nigh, Crazy Eyes sucked onto me like a barnacle and wouldn't let go.

She looks like the big sister on "South Park."  It was driving me nuts trying to think who she looks like, and it suddenly hit me that she looks like a cartoon character designed to be obnoxious, and she succeeds towards those ends without even trying or having the benefit of writers and artists.  There is something in those eyes that can be quite maddening too.  They have an intense look in them, and her eye balls seem to dart around like a lizard at nothing in particular.  You just can't help but get caught up in those crazy eyes while she rambles and spits on you.

That's right.  She spits when she talks.  This has got to be her worst quality.  I remember at one point rolling down the sleeves of my sweatshirt so at least my forearms would be protected from the saliva shower I was enduring.  You would think that she would see the pattern of everyone wiping their faces when they talk to her, and this would tip her off that maybe she was spitting a touch to much.  Perhaps it's that slobbery quality of her voice and the loss of her faculties due to the extreme amounts of booze she ingests that makes her lose control of her spit.  Which reminds me . . .

She drinks like a fish.  If you have been around this blog for more than a few posts, it's pretty clear that I have a similar problem.  Hell, I even shocked myself to find that some of the highest subjects tagged have been "drinking," "bars," and "the bar."  However, I like to think that I can be an entertaining and intellectual drunk.  Poor Crazy Eyes just gets lit up like a Christmas tree and has even less interesting things to say.  She told me all about her spin classes and her roommate who likes Japanimation a little too much, and I had nowhere to go until more friends arrived.  I just listened, watched those crazy eyes, and got sprayed with the spit.  Oh yeah . . .

. . . Her mouth isn't the only thing that sprays.  I hate to say it, but I know at least three guys who have said "what the hell," and took her home after last call.  I guess ladies who drink like animals and wear lingerie and garter belts in public aren't that hard to bed.  But my one buddy said that she squirted all over his sheets.  He told me this happened every time they got down, and he said "I just didn't have enough linen to keep fuckin' that broad."

Sorry.  That was crude, but it was funny and just couldn't be left out.

How about you, Seven Readers, do you have anyone brutal in your life that you would like to talk about in the comments today?
Posted by Dr. Kenneth Noisewater at 3:52 PM 7 comments:

Him: Hey, babe.  You almost done in there?  Because I gotta poo like a mastodon.


Her: A mastadon is a giant, hairy elephant thing.

Him: Oh yeah.  That's what I gotta' poo like so hurry up in there.

I had these thoughts late at night while unlocking my bike outside of a crowded bar:

Those two guys look suspicious.  I don't want to get robbed.  Guy on the right has acne scars.  It's not my fault that I'm scared of him.  The 80's taught me to be scared of those types, what with the dude from "Grease" and Bryan Adams. 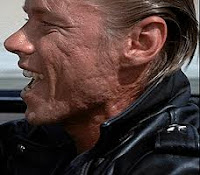