I took the day off of work to go in for a vasectomy yesterday. They asked that I shave myself. Down there. I thought at first they should have a nurse do that, but I guess they don't want the liability of the possibility of a little knick with a razor and the patient to bleeding to death from their tescticles. That's no way to go. So I got that done in the morning and headed in for my 1PM appointment. When my time came up they called me into a room and asked me to strip from the waist down and lie on the table with one of those paper sheets over my business.

The first thing the doctor said when he walked in was, "Where's you phone?"

I let him know that it was still in my jeans which were slung over a chair and he says, "Oh, you're going to want to go get that before we get started. You'll want a distraction from what I'm doing to you down here."

I trusted his judgment. He's done a lot more of these than me. Now I'm lying on the operating table with my phone in my hand sending texts to my wife as a doctor and a nurse are prepping the twins for surgery. Then it occurred to me that with access to a phone I could do live Tweets of the experience. That would be really funny if I used Twitter, which I don't. What I do have is blogger, so I give you Part 1 of The Vasectomy Monologs.

1:23PM - I had no idea my phone would make that picture noise when I snapped that. Hope they don't take it away from me because this is too much fun.

1:24PM - I hear the doctor say "The machine isn't heating up the way it is supposed to, so I didn't want to take a chance."

What? Why isn't the ball machine working? What are you doing instead? I don't want the Plan B version of this whole thing.

1:26PM - I have to admit that when I was all alone before the doctors came in I was smacked with sudden blast of sadness and regret. I know all the practical reasons not to have another kid, and they all make sense. We don't have the money, we don't have the space, and consequently we don't have the money for more space. We are getting a little bit older, and Mrs. Noisewater's last pregnancy was really hard. Desi Noisewater, our 4-month-old, was born with a missing kidney. Did we get off easy here? What might the next one have wrong? Plus these kids are a ton of work, we hardly sleep, we both work full time, and there is just no way in hell we could start over with another baby again.

These are all reasons that make perfect sense, and I know I'm doing what is best for my family right here. But we can't help what we feel in the moment, and those feelings were the following 2:

1. "But I want a little girl!" My sister had 3 boys, most of my close friends only have boys. There's something about that relationship between a dad and his daughter that I guess I'll just never know, like in all of the weddings I have been to (including my own) where a father walks his daughter down the aisle. Well, there is no turning back now. They say this procedure is reversible, but there is no way I'm doing this again. This is it. But it's sad and just feels kind of wrong to me. I can't imagine what a woman having an abortion must feel like because I'm mourning what could have maybe been, and they're mourning what actually would be if they just left the clinic and didn't go through with it. That has to be tough.

2. "Would if the zombie and/or Terminator apocalypse comes and I need to repopulate the earth?"

Both 1 and 2 are important to consider.

TO BE CONTINUED . . . Stay tuned for the next installment, my Seven Readers.

Posted by Dr. Kenneth Noisewater at 6:49 AM 5 comments:

Sometimes when you're rocking a baby in an attempt to get them to fall asleep, you lay them down and they're instantly awake again the second their head touches the crib. It is like they feel the gravity of being lowered down and say, "I'm up! I got more crying to do! Nobody is sleeping around here!" As the nights go on, you start to get a sense of if they're just momentarily sleeping or if they're out cold sleeping. There is a difference.

This leads me to another Dad Tip, this time referencing something any dad worth a damn can relate to: professional wrestling. What you do is give your youngster the Hulkster test. Remember when Hulk Hogan got locked in a sleeper hold*, perhaps Ted Dibiase's Million Dollar Dream, but really any finishing move that causes the opponent to lose consciousness? What the referee would do to see if Hogan could continue after the choke hold is lift Hulk's arm up in the air, and it would flop lifelessly down on the mat. Then he would do it a second time with the same result. Now, on the third hoisting of Mr. Hogan's python, if his arm hit the floor again the match would end in a victory for his opponent. Of course this would never happen because just before that hand would hit the floor he would stop it dead in its tracks and start shaking it. Then he would shake his head no, as if to say, "I'm not out yet." His opponent would then look all scared because if his finishing move wasn't enough, what chance did he have now? 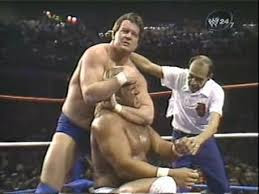 So punches would be thrown at the Hulk in desperation, but The Hulkster would just keep shaking his head. And I think you know how the rest goes. Hogan throws the dude off the ropes, guy bounces and runs back towards him defenselessly for some reason, eats a boot to the face, Hulk gets a running start by bouncing himself off the ropes, and then he does a flying leg drop, landing 300 pounds on the guy's face via that overly tanned thigh meat, pins him, and that's the match.

So what I'm suggesting for today's Dad Tip** is lifting the baby's arm like a WWE referee to see if the kid is ready to sleep for real or just trying to bring some drama and excitement into the bedtime match that he knows he is going to win.

*I saw an interview of Hulk Hogan where he said that he wished he did a sleeper hold as his own finishing move instead of his leg drop because all that weight crashing down ended up doing irreparable damage to his spine.

**Hulk Hogan had somewhat of a Dad Tip of his own: "To all of my Hulkamaniacs out there, say your prayers and eat your vitamins and you'll never go wrong."
Posted by Dr. Kenneth Noisewater at 7:45 PM 4 comments:

Too Much Butt Cream Is Better Than None At All

Tomorrow Mrs. Noisewater needs the car, so immediately after work I have to take Erik Noisewater in an Uber to make it on time for his gymnastics class. To do this legally I could lug a heavy and awkward travel car seat or I could buy a booster seat since the young man is now over 40 pounds. I found a good and cheap booster at Target, which was open until 10pm, so after getting the kids to bed, I ducked out to pick it up. JESUS THIS STORY SOUNDS BORING, but just stay with me here. So while I'm there I had to pick up eggs, orange juice, and diaper rash cream. The cream looked to be buy one get one free, but when I got to the register she informed me that it was buy THREE get one free. I tried to explain to her that no one needs to walk out of Target with FOUR tubes of butt cream. I said, "Do you know how small a baby's butt crack is? It's like this (and used my fingers to show an inch long butt crack). By the time I'm anywhere near finished four tubes of this stuff, the kid won't be in diapers anymore." She asked if I just wanted the one, and I said yes, now thinking that maybe my baby booty crack lecture was perhaps a bit much.

When I came home Mrs. Noisewater was on the couch feeding our second born who had already woken up, and the first born pooped his pants so she had to deal with that too. Neither one of us was having too awesome of a night as it turns out. When I put the eggs and orange juice into the fridge I noticed there were ZERO tubes of butt cream in the bag. Are you kidding me? Then Mrs. Noisewater pointed out that I had picked out a booster seat with pink trim, and it was a little obnoxious. I would have noticed an entirely pink one, but since I was a little bit tired tonight and always a little bit color blind every night, the trim went unnoticed. Don't get me wrong, we don't assign gender colors or toys or anything else to our kids. As a matter of fact, Erik Noisewater has a pink unicorn back pack, and he rocks that fucker every day like a God damned champion. This booster seat was just tacky as all get out, so it had to go back. Plus I needed to go back for the chap-ass ointment that they had forgotten anyway.

I got back to the store to see the two tubes of Desitin sitting on the counter, which vindicated me because a little part of me wondered if maybe I had dropped it somehow. They got me a very bland but not gaudy gray car seat instead, which was fine, until I got it home and noticed that it had a stain. I'm not going back. To hell with it. It will get more stains.

So those are the kinds of stories I'll be telling from now on if anyone is still around. Sorry, no more drunk tales full of crazy nights and loose women. Nope. Angry dad with two Target trips on a school night - that sort of thing. Also, I should have a vasectomy coming up later this month for more dad blog fodder. Stay tuned.
Posted by Dr. Kenneth Noisewater at 8:06 PM 4 comments: