My girlfriend and I finally made it through the two years of a long-distance relationship while she was in graduate school.  I picked her up the other night from the airport, and we moved her stuff into my crummy apartment that is now our crummy apartment.

This morning I woke up and thought of something funny to text her, and while reaching to my right to grab my phone, I saw that she was right there to my left - next to me in bed.  Forever.

I pulled her in close, she scooted her behind in close to me, and we went back to sleep in each other's arms.

I forgot what I wanted to tell her.  I'm sure it wasn't important. 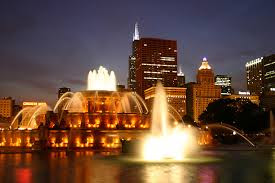 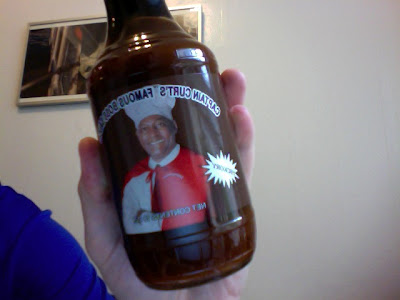 I had to buy some BBQ sauce at the store the other day, and I just couldn't pass up Captain Curt when I saw his smiling, friendly face.  Also, notice that he is going for a superhero look, like Captain America, yet he opts for the cheapest looking cape of all time.  It lists a Chicago phone number, so I just texted him to thank him for the awesome sauce (which I haven't actually tasted yet so can't say if it tastes awesome) and the outstanding picture.  We will see if he texts back; don't think it's a land line.  Maybe we will end up hanging out this weekend, me and Curt, perhaps catch a movie or something.
Posted by Dr. Kenneth Noisewater at 9:03 PM 3 comments:

The only note in my phone for a new blog post was this:

"I need to say dickhead more."

Dickhead really is quite a funny thing to call someone.  You can call someone a dick, and that just means he isn't very nice, but to be a dickhead is to say that it's as if your head is an actual penis.  You are walking around existing among us with a penis making all of the decisions on your behalf.

To make good on this pledge, I'll call someone a dickhead at some point tomorrow, and I hope you'll be a pal and call some dickhead a dickhead too.  Thanks.

Last night a friend was telling me that she had an old friend stay over for a weekend, and after a night of hard drinking, this friend did some "sleep peeing" in a couple spots in the apartment.  My friend said she had no idea it happened until a day or two later when she smelled pee and first discovered that her friend had opened up the oven door and peed all over it.

Sniffing for more pee, her nose led her to her entertainment center where her friend had peed all over the place, ruining the DVD player.

Now, those two places are nothing like toilets.  The oven door lowers down, whereas a toilet seat lifts up.  And then the entertainment center, did she eject the little slide and pee right into the DVD slot because that is nothing at all like a toilet.

This leads me to believe that this was an intentional pee pee attack!

What do you all think?  Anyone have any "pee walking" stories?  Also, which do you think is a better term, sleep peeing or pee walking, and why?

The windows are not so good in my ancient Lincoln Park apartment, and sometimes I can hear every word people say when they are drunk and loud in the alley outside my bedroom.  My ladyfriend, LSD, is in town this weekend, and for whatever reason I decided to talk back to these idiots late last night.  The guy was in the alley on his phone, telling his friend, "I just hate electronic music."  So I opened the window and said, "What's wrong with electronic music?"  The guy told the person on the phone, "Someone just said what's wrong with electronic music?"  He didn't at all get the point that I was trying to tell him to shut the hell up and let me sleep.  I guess he just thought I was coming to the defense of electronic music.   He doesn't know me too well.  LSD and I had a good laugh at this exchange and were still laughing when we got up this morning; and stayed in bed laughing for as long as we could.
Posted by Dr. Kenneth Noisewater at 3:10 PM 5 comments:

Castlevania Cab Parts One and Two

So a couple weeks ago Night Train, Choo Choo Train, and myself get into a cab and there was a rather lovely young woman from Romania driving.  I told her she talked exactly like Bela Lugosi, only prettier.  I asked if she was an actual vampire, and she played along and we agreed that driving cabs at night is the perfect job for her, so long as she puts the cab away and gets safe and sound into her coffin before the sun comes out and fries her up like an egg.  When we were setting up the payment, she said she could take it out in blood, at which time I didn't hesitate to offer up my forearm for her to extract some type O negative.

Fast forward one week later, and would you believe that the three of us get into a cab and who should be driving again?  That's right.  Sexy Bela Lugosi.  Of all the cabs in Chicago and the same three guys get into a cab with the exact same driver?  The odds of this occurring are astronomical.  I'm convinced she has vampire powers.  I'm scared.  I think I'll take the bus from now on . . .