I played paintball one time and one time only for a bachelor party a number of years ago, and the one thing I learned is this: Firepower matters. Our group used the rental guns which released paintball capsules kind of fast. I guess it could have been considered semi automatic. We had to play against other random people outside of our group who brought their fully automatic weapons. There really is no comparison.

One guy was wearing a hockey jersey that said "Starchild" on the back, and this dude's weapon sprayed everywhere. And I mean everywhere. When this guy lit you up, you looked like someone took one of those paint rollers and covered you head to toe, not missing a single inch. Star Child was a shorter Caucasian man who looked not unlike Wayne from "Wayne's World," which shouldn't come as a surprise considering this was in Suburban Illinois not too far from Wayne's home of Aurora. ] 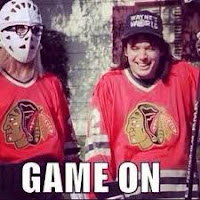 I have some questions that I never got answered.

1. How much do you suppose a weapon of that caliber costs?

2. Where is the sport in just holding down a trigger and hosing down the entire room?

3. Was that the top of the line back then, and how far has paintball technology advanced since Star Child's hey day (which was around 2001)? I seriously can't imagine a more dominant weapon on the market.

4. Just why in the hell does he call himself Starchild? Is it a reference to Parliament/Funkadelic, Paul Stanley from Kiss, "2001: A Space Odyssey" or none of the above? Or maybe just his own thing, like it came to him in a paintball dream of some kind . . .

5. Do you think he has an entire star fleet of star children by now? Have I put way too much thought into this? I highly doubt Starchild has had a day recently where he wondered where the guy is that ducked down too fast to avoid a paintball from across the room, hit his rear end on a pipe, badly bruised his own ass, and had to sit the rest of the day out.

If you have answers to any of these questions or just want to say hello, blow me up like a Starchild buckshot in the comments.
Posted by Dr. Kenneth Noisewater at 4:42 PM 8 comments:

I have some friends coming over in a bit for one of our Man Nights (no wives, kids, or girlfriends aloud). After spinning records and sampling a few craft beers at my place, we're going to go down the street to a nice restaurant that I've been meaning to try. Going to dinner with just dudes was not something I did in my twenties. Back then the dinner might be a slice of pizza chased down with something in the neighborhood of 30 beers. As a matter of fact, if 20's Ken just heard 30's Ken's nerdy agenda for the night, he would makes an excuse to blow off 30's Ken and never call him again.

However, right about now, being with a collection of some of the best friends I've ever had with great music and tasty beer sounds perfect. Here is some of the stuff that will be going down so that you, my beloved readers, can feel like you're here with us. For the virtual version of the party, all are welcome (women, children, and members of the animal kingdom included).

And let's not forget the vinyl that will be spinning:

Then we will go to a few bars and possibly end up at the infamous Liars Club. At that point all classiness will come to a screeching halt, and we will be reverting back to the 20's versions of ourselves, dancing our faces off to goofy stuff like Britney Spears immediately followed by moshing around to Suicidal Tendencies. Hey, did I ever tell you about the time my buddy was taking a pee there and felt something dripping on his bare feet (he was wearing flip-flops)? It was his own pee dripping through a hole in the urinal. Now, you know a place has a certain cache' if we continue to go back there when there are disgusting health code violations such as that. I wouldn't try their cheese tray, let's put it that way.

Thanks for joining the party, readers. Hope you are also having a fantastic weekend.