What Does It Say About Me That THESE Are the Video Games That I Like?

I have a friend who works at an arcade bar where they serve beers, so it's not hard for him to talk me into visiting his work place. After going around to see which games to play, I noticed that I seem to always gravitate towards Tapper and N.A.R.C. What alarms me is that these are the two games that most involve beer and drugs.

In Tapper (1983) you control a bartender pouring beers and passing them down three or four long bars to advancing customers. If a customer makes it all the way to the end of the bar without getting a drink, they pick you up and throw you down the bar (costing you a life). Also, if they send an empty glass down the bar before you can catch it, that also results in a lost life. It's a fast paced strategy game, but I'm always wondering why this doesn't staff more bartenders? I also start wondering why there isn't any security up in there? It seems like a scary place to work when a customer can whip your ass for not getting a drink out fast enough.

Believe it or not, this game was sponsered by Budweiser, there is a Budweiser sign on the side of the game and hanging up on the wall of the video game bar, and at one point they say "This Bud's for you!" I used to play this game at a family pizza place as a little kid, and even then I thought it was amazing that I could put in a quarter and be a bartender!

If you thought Tapper was nuts you have got to play N.A.R.C. (1988). In this shoot-em-up classic you control special agents looking to bring down Mr. Big, the nation's biggest drug dealer. Along the way you arrest a number of suspects, but usually you shoot them with a machine gun or blow them to hell with a rocket launcher. There are times in the game where you will blow something up and bags of cocaine will fly everywhere, at which time you scoop them up. At the end of each level it shows how many busts you made, confirmed kills you racked up, and how many drugs you confiscated.  One level there are guys heaving giant seringes at you, and then in another there are steroid abusing guys picking up dumpsters and chucking them at you. This game really put the "war" in the whole "War On Drugs" thing that was going on in the 1980's. It's a blast!

Boy, I'm getting excited just talking about these two classics. I may be paying my friend another visit really soon. See you around, blog buddies.
Posted by Dr. Kenneth Noisewater at 2:59 PM 8 comments:

My wife's grandfather told an interesting story over breakfast the morning after Thanksgiving. I go out to northern California to be with her family ever year, and it's always good to see grandpa. He is well into his 80's, fought in World War II, and he is one of the only guys still around who can say they were at Normandy. He is also the proud owner of one of the most impressive antique weapons collections known to man. As a matter of fact, Charlie Watts once came over to his house to buy one of his swords. Grandpa isn't a fan of rock music so he wasn't as excited about that visit as I would have been. All he remembers about Charlie is how dirty his fingernails were. 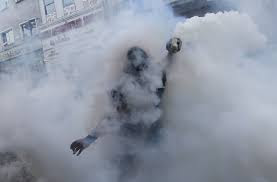 Anyway, grandpa is offered bacon and said that he better not after he had bacon with the family a year ago and drove home. Apparently the bacon was causing a serious need to get to the bathroom for the last few miles of his ride (he still drives!), and in his rush to get to the toilet upon opening the door, he accidentally kicked the trip wire he had set up and released tear gas all over him and all through out the house. Grandpa is big on keeping his home and the weapons collection tightly secured and evidently engineered the whole trip wire tear gas thing. He said that he couldn't leave the house because he still had that urgent call from nature, and he then had to sit there and finish his business, just enduring the pain with his eyes burning. He truly is from the "Greatest Generation." I would have cried and screamed loud enough for all my neighbors to hear, and they would all step outside to see what the commotion was all about just in time to see me pooping the bushes. And still crying.

What is funny is that Mrs. Noisewater's dad, grandpa's step-son, was quick to point out that this wasn't the first time that grandpa had set off his own tear gas bomb upon himself. Maybe he has an immunity built up so that he can fight off a would be intruder through the haze and eye burning? Who knows.

In any event, here's hoping your next "movement" is in a cozy and comfortable spot free of any chemical weaponry.
Posted by Dr. Kenneth Noisewater at 7:57 PM 6 comments: