Anyone Need a Karate Announcer?

I know this crazy son of a gun who used to be a prison guard and now does security at a school.  He is all of 5'5" but is intense as hell and a scary ass drill sergeant when he needs to be.  This guy also teaches karate at the school, and he asked me if I would be a judge for a karate tournament.  I tried to respectfully decline do to the fact that I don't know my ass from a hole in the ground when it comes to karate.  His response was hilarious and was this:

"Yeah, but when you see a fight, you know which guy got his ass whipped, right?"

Okay, by that definition I guess I'm a karate judge. 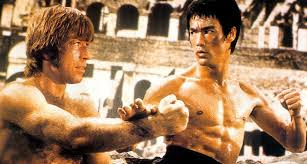 When I got there there was another security guard struggling through his soundcheck on the microphone in an attempt to warm up as the announcer.  He asked if I would swap roles with him.  In my estimation announcing was a way safer bet because as the judge I might have parents pissed off that I picked their kid's opponent.  And with that brilliant trade I made a switch to become the MC for the evening.

I got into the swing of things pretty quickly with my commentary.  When I didn't know what was going on in a match, I just defaulted to pointing out how hard one of the kids was trying with lines like, "Isn't he a scrapper, folks?  Let's give him a hand!"

If it was a back-and-forth tussle, I would say "We got a scrap here, ladies and gentlemen!"  The kindergarten division was particularly cute, by the way.

Just before the judges' decisions I would say something to the effect of "That was a closely contested bout.  It will be interesting to see how the judges scored this one."  Then the four judges would flip their flags to the white or red flag for which opponent won in their uninformed opinions.  It probably would have made more sense to have an odd number of judges, but whatever.  In the result of a tie there was only one way to settle it . . . Who can do more push-ups?!  I'm serious.  So then I counted out the push-ups on the mic and commented on who's arms were shaking and who was losing the integrity of their push-up form.  The organizers of this event were winging it, and I was improvising what the hell to say about it.  It was a blast. 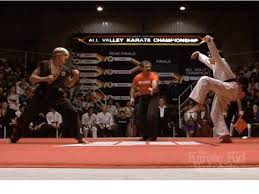 My air time on the mic got me warmed up for my third reverend gig that I had on the upcoming weekend (I got "ordained" online to officiate weddings for friends).  My good buddy, Southie got married, and I was happy to help him out  Just like every other time, I was nervous.  I wasn't sure how I did when I wrapped it up, but I got nothing but compliments all night long.  They weren't just people who bumped into me at the bar and felt a need to say something - many made a point to come up to me for the sole purpose of saying how great they thought the ceremony was.  It felt really good to know that I made the couple's special day even better and managed to entertain and please so many guests.

The reverend rides again.  And I hope the karate announcer sweeps the leg again because that was hilarious.
Posted by Dr. Kenneth Noisewater at 7:55 PM 8 comments:

Anyone ever hear "'Da Butt" by E.U.?  I heard it on my bike ride home from work today and started laughing my ass off at this line: "If you get that notion get your backfield in motion."

I'm going to say something right now: That is singlehandedly the best line ever about American football, booty shaking, or combinations thereof.

The minute I got home I added it to our wedding playlist.  This was a point of contention, but to compromise I'm going to give the d.j. a time to fade it out midway through the song, likely just after that backfield line . . .

The Great Gig In the Sky

I had this dream the other night where I was at a comedy club, or was it a strip bar?  It was hard to tell because the late great Robert Schimmel was trying to do his set on the same stage as a stripper.  I remember being pissed at the time because there were some drunks heckling him, but that's to be expected.  It's just weird trying to make jokes with a woman to your left taking her clothes off.

Here I was yelling at these jerks to shut up, but Schimmel was so understanding.  He was saying, "It's all right.  A gig's a gig."

The real life Robert Schimmel was in a car wreck in which his 19-year-old daughter was driving and the car flipped over on its side.  His son in the car was not hurt at all, his daughter sustained some injuries, but sadly, Mr. Schimmel died from his injuries.


I guess I visited him in a dream state in that great Titty Bar/Comedy Club in the sky the other night.  And he was good to see him truly at peace when he said to me "A gig's a gig."
Posted by Dr. Kenneth Noisewater at 7:41 PM 3 comments: