In the final installment, Southie tells the story of the first adult film he ever saw.  He was in his Uncle's basement and had a pretty traumatic experience.  It sounds awful when you say it like that, but it's not what you think. 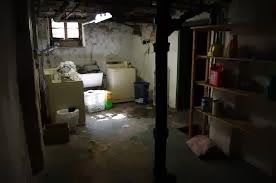 Songs used in the background on this podcast:

Go ahead and give it a play or a download.  Let us know what you think, and if you haven't already, share with us the story of your first time watching a dirty movie as a kid.

I was at a holiday party recently in which the music was terrible.  This wouldn't usually bother me that much (okay, it always bothers me), but I know the host had good music but was not allowed to play his own music - his wife's music was dominating.  Then he was told to play music in the kitchen, and I'm thinking, "Yes!  My boy's music will be in the kitchen, so I'll just hang out in there.  That's where the booze is anyway."  Nope.  She came in there later and switched that to her music too.

Just when I was settling in with some decent scotch and starting to get a warm buzz on a cold evening, and just when I'm buzzed up enough not to care too much about the music, I suddenly hear this weird whimsical techno crappola stuff kick in that just couldn't be ignored.  An instant record-scratcher track where everyone stops and says, "Huh???"

That's when I blurted out the following:


What in the hell is this shit?  It sounds like what the Teletubbies play at one of their cocaine parties. 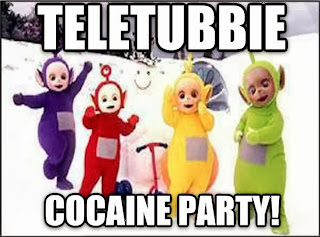 Then ladyfriend came over by my side to whisper to me that the song was something that a guest at the party made with his DJ'ing, and he was three feet away from me when I loudly delivered that comment.  Oops.

In my defense, if you heard the song and my description, you would have congratulated me on instantaneously deducing exactly what it sounded like.


How about you, seven readers?  Put a foot in your mouth lately?
Posted by Dr. Kenneth Noisewater at 4:56 PM 7 comments:

I had a long day today.  Stressful and emotional.  I stopped off for a beer by myself at a good bar by my apartment.  It's worth the extra few blocks because it's awesome.  Talking about Journey Atari games got me engrossed with some of the regulars, and as some country music played, I got excited to go home and listen to "Bustin' Out" on vinyl by Pure Prarie League.  I bought this record years ago only because "Amy" is on it, but it is chocked full of awesome southern rock.  And I bought it for $0.49.  Yes.  Less than fifty cents.

I just read that paragraph and saw that I was excited to go home.  Wow.  Officially a dork.

Kim Coulter wrote her name in some permanent marker across the front of the cover of the LP.  Don't you ever want to know who these people are?  I imagine tons of people have sold this record for a host of reasons, but the way I operate is I need to know who owned THIS VERY COPY.

I'm a weird fan of rock music.  The kind that wants to know who listened to this album and where.  And which drugs were consumed.  And did Kim have any feelings about having to part with this record, or was it Kim's daughter who sold it?  And is Kim dead?  Did Kim ever really dig this record?  I mean, she cared enough to write her name on it . . .

Anyone else think at along these lines, or am I totally a nut.  I am too nuts to be alone right now, right?  Maybe I should just belly up to the bar again and stop being a nut.

Hope you enjoy.  Have a listen or download it by clicking the options at the top, and let us know what you think.

The songs in the background of this podcast are the "Ding Dong Song" by Gunther and "Sex Machine" by Sly and the Family Stone, and the picture below is actually the cover of the infamous movie in Mr. Dangerous' past!

In the latest podcast here at The Gancer, Dr. Kenneth Noisewater and his good friends Southie and Dangerous tell the stories about the first pornographic film they ever saw.  It is our contention that right or wrong, no man will forget their first.

In part one of the three part series, Dr. Ken discusses the film he saw as a youngster - a film with a surprisingly decent plot, a dirty scene with a football as a prop, and a break in that leads to a three way as punishment for the would be burglar.

Ken was rather horrified by his first adult film viewing, and you will surprised at how he exacted his revenge upon that lascivious VHS.

Hit play, enjoy, and please share in the comments what you think about it - or share your first experience.

I'm doing in a podcast today with some friends.  The topic is the first pornographic movie we ever saw.

What about you, readers?  Where did you find/buy it?  How old were you?  Do you remember the name of it?  Were you turned on or totally horrified (like me)? 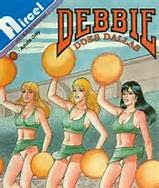 The lady and I got aboard a train to go downtown for Christmas shopping, and the second we poked our heads in we smelled the foul stench of a thousand dirty assholes.  It was rough.  I was really tired that morning and needed my coffee badly, but those dookie fumes surely had already seeped into my cup.  I will take sleepiness over poop java every time.

A Black couple stepped on at the next stop, and while his girlfriend took an air freshener out of her purse and sprayed away liberally, he had the following to say:

"Aww hell naw!  Who's the smelly-ass muthafucka on here?  I don't care if it was Obama himself smelling like that, I'll smack you in the head with some soap, with yo' stanky booty ass."

He was actually scanning around the room and making eye contact with all the passengers, hoping to find the culprit.  The smell really angered him.   I like his idea of executing some poetic justice on the guy by braining him with soap, and while "stanky booty ass" doesn't seem to make much sense, seeing as booty and ass mean exactly the same thing, "self" in this sense means more like "himself," if that makes sense.  It was worded perfectly.


And my coffee flavor was instantaneously changed to Stanky Booty Ass. 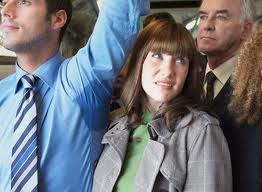 I woke up from a nap today and checked my Facebook.  I don't recommend this practice because we're not always thinking clearly in a state such as this.  The first update I saw was from a local newspaper who was outraged that a bar, one which I have been to tons of times, posted a special on their giant sign outside the bar for everyone to see: "Remember Pearl Harbor With Bombs and Kamikazes!"  Call me a dumb ass, but my gut reaction was to laugh my ass off.  Now if you haven't already deemed me an idiot, the next thing I did was respond saying that people need to lighten up. 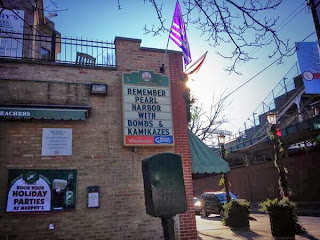 Then I realized that I could probably lose my job or something, so I deleted it.

It's good to have sick people around to make jokes with, and that's when it's time to do stuff like that.  When you own a business, yeah, don't make a joke like that plastered on your building.  As a matter of fact, don't say anything that anyone can ever be offended by.   However, if I were drinking in that bar (again, I have a lot), and if the bartender, knowing his audience, proposed honoring the day with those shots, I would have gladly drank them and likely paid for them.  And certainly laughed.

It's just a matter of knowing your audience.
Posted by Dr. Kenneth Noisewater at 4:40 PM 7 comments: