Dilf With Baby on Board 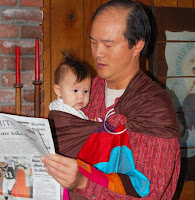 My girlfriend has a park across from her apartment, which is great for looking out to see what people are wearing to see what to wear, but it's also great for people watching in general. She told me that she had been seeing a rash of DILFs (Dads I'd Like to . . . Fornicate). We then got in a discussion about dads and baby slings. I want to know what my Seven Readers think.

Is a man more or less hot if he's wearing one of those?

Would you ever wear one?

Can a man be hot if he's wearing a baby sling AND jean shorts? How about a baby sling and Zubaz?
Posted by Dr. Kenneth Noisewater at 8:26 PM 10 comments:

Here's what I came up with, in no particular order:

1. Stinkor from He-Man. He looked like a skunk, and his power was just that he really, really smelled. It must have sucked for him to have a superpower of which he was a little self-conscious, or did he just not give a damn, like, "That's right, bitches! Stinkor is back, so put your clothespins over your nose, and get ready to lose your appetite!" Whether he embraced it or he wanted to crawl into a cave and wallow in his own stink, either way, only the 1980's would have a muscle-bound guy who reeked to the point of superpowerdom.

2. Big League Chew. It was gum that came in a pouch, billed to wadded into your mouth during little league games to prepare kids for chewing tobacco and eventual mouth cancer, and you have to love how they still make the stuff. Joe Camel gets all that flack for being a cartoon geared towards kids and having a phallic nose, while all the while kids are throwing in a chew before heading to the on deck circle, and I like that for some reason.

3. Jimmy "Superfly" Snuka. He was a Fiji born professional wrestler who ushered in high flying acrobatics off the top ropes into the world of body builders who fake like they're hurting one another. He was my favorite guy, and it always seemed like he lost, which is why I liked him. And the Chicago Cubs.

4. Pitfall. It was a game on the Atari 2600 video game counsel in which you were Pitfall Harry, a guy jumping on the heads of alligators, swinging on vines, and hopping over scorpions in an endless screen-by-screen pursuit of hidden treasures in the jungle. Today's games are too advanced. Now they have these story lines where you're a guy stealing cars and shooting hookers in the face. I like the world of Pitfall, where I could assign my own metaphors, like maybe he's just going to that next screen, hoping for more treasure, but no matter how much gold he gets, the game will only end when he dies in a limited number of horrific ways, or when his time runs out. If you don't see the deeper meaning in that, just go back to your hooker shooting games, and try not to think too much. Pitfall Harry and I think you're not deep enough, and you wouldn't last a day in those scorpion infested jungle caverns.

5. Feathered Hair. I just dig it, that's all. Do I think it should come back? No, that would be stupid, but it's hot. Can a chick work up some feathered hair for one night only, and then fix it before she had to go to work the next day looking like Farah Fawcett? If my girlfriend could do that for me, I'd be happier than Ponch. At the very least, I'd promise never to feather my own hair.
Posted by Dr. Kenneth Noisewater at 8:05 PM 13 comments:

1. I know it's old news, but remember Miss South Carolina in the Miss Teen USA pageant with her incoherent, desperate effort to explain the horrors of the lack of maps in foreign countries? Well, the other day I was thinking about, don't ask me why, how she kept saying "such as," and I was speculating that someone probably coached her to say that every time she had the urge to say the word like because she probably said the L-Word a few zillion times during her run-through responses. Watching it again, there is, in fact, one instance where she starts to say like, catches herself, and then goes to her stand-in, the fail proof such as. Check it out.

2. On our walk to the Cubs game the other night, my buddies and I were talking about the final, really fat days of Chris Farley, and I said, "Remember that last shitty one he did with Matthew Perry, Wagons East? My good friend corrected me, saying that title was John Candy's morbidly obese movie, and I was thinking of Almost Heroes. Isn't it weird that two overweight, very funny, likable actors both had fat guy in the frontier movies that were universally lambasted by critics for their swan songs just before their untimely deaths?

3. Gancey Girlfriend was cleaning her apartment with a do-rag on her head, and I said, kissing her temple, "Hello there, Aunt Jemima." By the end of the night, she was calling herself the pancake icon, too, but then she questioned it, saying that she did not believe the good aunt wore the apparel in question. This morning, reaching into the cabinet, I was shocked to see that my syrup had revealed that Gancey Girlfriend was right: Jemima was staring right back at me sans do-rag. I did the research, and apparently she hung up her rag in 1989. I personally think the old way was better because I'm old school, and if for no better reason than to keep her fallen hairs out of the damn syrup.

What senseless junk have you been thinking about, Seven Readers?
Posted by Dr. Kenneth Noisewater at 11:19 AM 17 comments: