Do you ever have one of those dreams where if someone didn't mention something to remind you of it, it would be totally lost from your memory forever?  That happened to me tonight when I was out with some friends watching a game 7 in the NHL playoffs for my Chicago Blackhawks where someone made mention of the "Anchorman" sequel.  I was suddenly reminded that last night I had a dream that Ron Burgandy was titty-fucking Veronica Cornerstone.  I wasn't even in the dream - it was actually Will Ferrel and his penis doing that exact sex act and me just watching like in a movie.  In all honesty, even if I wasn't directly involved, it was still pretty hot. 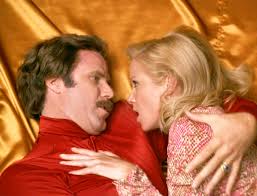 I went to Lan's Old Town for the first time on Friday night.  It is a bring your own alcohol Chinese restaurant and karaoke bar in Chicago that is famous for its' drunken owner and host, Jimmy Ma.  My good friend Choo Choo Train is a regular there, and he recommended we bring Jimmy a bottle of Jack. Jimmy was out front having a cigarette when we arrived, and he was already plastered.  He was pleased to see that we brought him a bottle, and he proceeded to crack the seal, take a swig out of it, got me in a head lock even though I have never met him, and then put his cigarette out.  With his tongue!!!

The customers all interact with one another, have a seat at each others tables to introduce themselves and share their booze with you.  There were tons of good looking girls in there that night, but it still wasn't enough for Jimmy's taste, and he kept asking us in his thick Chinese accent, "You going to bring some pussy in here, or what?"  Jimmy pretty much lives the dream and does whatever the hell he wants and people love him for it.  For example, he grabbed a beautiful blond girl who looked to be 30 years younger than him and just started making out with her, and she just thought it was hilarious.  Only Jimmy could pull off a move like that. 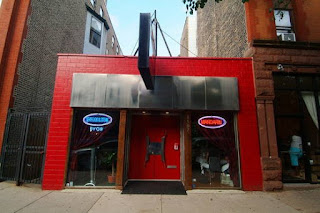 I know I will be back very, very soon, and I recommend you, my seven readers, give it a try too.  I do not, however, recommend putting cigarettes out on your tongue.
Posted by Dr. Kenneth Noisewater at 8:03 PM 2 comments:

That Guy's Vein Is Kickin'

The other night a friend was saying he was throwing a party at a bar called Fat Pour, and I thought for all the world that he said fat porn.  This got me thinking that I have seen a couple of fan porns.  One night my buddiess from our high school track team decided to get together one night to watch a couple of these disgusting films.  One of our friends worked at a video store, and I think his morbid curiosity got the best of him, staring at those boxes in the little room behind the curtain all those times.  We settled in for a horrifying double feature: "Life in the Fat Lane" and "Fat Liners," both of which were equally gross.  They were just a series of big buff studs taking on really fat women, and one of them, the headliner, was around 800 pounds.  She looked like the Michelin Man.

Years later I ran into a guy from the track team who was there that fateful night.  He had long hair and would listen to Nine Inch Nails between races, which is of no consequence, but a fine choice for music, I think.  Anyway, he said, "Do you remember what you said that night that had us all laughing our asses off?"  I could not even wager a guess.  I was a much quieter and shy guy back then, believe it or not, so when I would finally say something, it was usually a doozy.  Apparently what I said when turning away from a close up on a big screen of a guy's wang was "Ugh, that guy's vein is kickin'."
Posted by Dr. Kenneth Noisewater at 11:20 AM 2 comments:

That Time I Got Thrown Up Upon

A few weekends back we had a Chicago area bachelor party for a former roommate of mine who's formal bachelor party was a camping in the cold excursion (all Chicagoans took a pass on that one).  Being a long time drinking resident of the area, he asked me to be the point man on planning.  I said I could probably find a super cheap route where we could pay $15 to drink all we want for a few hours, to which he said, "I don't want to do an all-you-can-drink because that encourages binge drinking.  I really don't party much anymore."  That's actually what he said . . .

So he and all the guys arrive at my apartment, we're sipping some beers, and it was kind of sweet how Former Roomie was gushing over his bride to be, right down to the fact that he loved her big boobs.  He proceeded to show us a (fully clothed) picture.  Yup.  Big ones.  Then he makes an announcement: "Listen, guys.  No shots tonight.  I'm serious."  I had planned on doing maybe just one as a celebratory thing, but zero is just fine too.

Former Roomie said that inviting anyone was cool so Night Train met us out.  I forgot that Night Train orders shots nonstop so before I could think to tell him about the rule for the night, Night Train saddles over to us with a tray full of one ounce booze cups known as shots.  Former Roomie didn't even hesitate going against his own rule and immediately knocked down the shot of Jameson, or some other brown, vile liquid, and it wouldn't be his last of the night . . .

Oh yes, he did have one other rule: We had to end up at Liars Club before the end of the night.  This is a rule I liked even better than the first because, as long time readers will know, this is my favorite place on earth.  And this was the perfect night at Liars: Everyone was dancing, the music transitioned perfectly between Daft Punk and Motorhead, and all of us were having a ball.  Except Former Roomie who said that what he really wanted to do is go somewhere with a jukebox to use a phone application that he has to pick songs.  Despite the fact that my other good friend, James Douglas Morrison, and myself were dancing our faces off, we decided to do the right thing and accompany Former Roomie and his cousin to an after hours bar with a jukebox to play with.

Former Roomie selects his songs, and while I was excited to hear a live version of "Roadhouse Blues," when I heard a different version of the same song back-to-back, I should have known that he had become powerfully drunk.  Suddenly, I look across the table at him, and his eyes are wide, he looks scared, and while looking right in my eyes, he spits what I thought was some beer onto the table.  I thought this was a joke until I saw that there were in fact some chunks on the table.  As well as on my shirt.  James Douglas Morrison and I just headed for the exits without saying a word to anyone, even each other, as we went in cabs to go our separate ways.

The next day I asked James Douglas what in the hell that was all about, and he texted back, "I saw puke come across the table, and I was worried I would be next, so I got outa' there like shit through a Goose Gossage."  He has a way with words, that guy . . .

I got another text from Former Roomie, and he said, "Sorry I had to leave suddenly.  It was a long night.  hahaha.  Did you stay much longer after I left?"  Well, odds are if he doesn't remember that we left before him, he probably doesn't remember puking on me, and best to just keep it that way.  No need to make the guy feel bad about anything on his bachelor party.  Just head on back out of state, nuzzle in those big boobs, and go back to saying not to shot(s).

Posted by Dr. Kenneth Noisewater at 6:52 AM 7 comments:

I was at a karaoke bar with a bunch of friends the other night, and I noticed a guy I remembered seeing the last time I was there so he is likely always there.  He looked to be in his upper 40's, had pro wresting hair (bald on top and long in the back), and he just hung out drinking Coors Lights and keeping the DJ company all night, off and on singing a song, usually by the Eagles.

At one point the DJ called for a guy to sing who was nowhere to be found, and my buddy, Choo Choo Train, said "That's karaoke abandonment!"  It was.  And that is high crime where Choo Choo and I come from . . .

After last call, wrestling hair guy went up to sing the last song of the evening, "Faithfully" by Journey.  Now, this is a rather cornball song, but on this particular evening it was the perfect one to play.  I remember playing that song on my sister's CD player because I didn't have one yet, reading along with the lyrics, and wondering how a little weasel like Steve Perry could sing like that.  The whole bar must have some fond memories because they were all singing along arm-in-arm, swaying back-and-forth the way drunks often do.  This particular song also hit me hard because as Steve sang about being apart not being easy on his love affair, I was reminded of the fact that I have been doing the long distance relationship thing for the last 2 years, still seeing each other around once a month, but with just 2 months to go until we're together for good, it's harder than ever.

Thanks for listening and for "stand (ing) by me" all these years, 7 Readers.

I was at a bar a couple weekends ago, and I was randomly having beers with a guy who owned a pet store in the neighborhood.  He was funny as hell and talked a lot about playing on a men's hardball league three or four nights a week.  Another guy saddled up to the bar right between us in an old school suit, bow tie, and a mustache (I hate when people do that).  Pet Store Guy said to him, "Who the hell are you?  Latino Orville Redenbacher?"  I laughed my ass off because I just love it when people peg the exact person someone looks like, especially when it's a goofy mash up combo of people like this one.

Also, I stole this game from over at Dr. Zibb's page (Check him out; he's funny.  We must hit it off because we're both blog doctors): What you do is post a band's photo and the readers say who all the guys look like.  I'll pick the best/funniest answers for each band member for a master list.  And here we go . . .