1. So the other day I'm taking care of Baby Erik Noisewater all day, and I get a text from his mom saying that he has the best daddy ever. I appreciated the compliment, but I had to tell her that moments before I received that text I was taking a pee with the door open. Erik wandered in and stuck his hand right into my pee-pee stream. Now, I don't know who the best dad ever really is, but I'm pretty sure he wouldn't piss on his son. 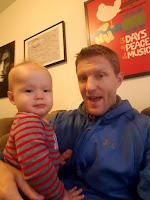 2. I'm going to the Cubs games today and tomorrow with two of my good friends who live in L.A. One doing really well directed television shows, and the other is a singer and the guy from the Ivanka post. It's the singer's 40th birthday, so we are all getting together at Wrigley Field for Cubs games today and tomorrow. Our Cubbies are already in the playoffs, so the game is just a chance to catch up and drink too many eleven dollar watery domestics. Many of the guys I'm going to this game with were friends I have known since grade school, and we have been going to games since we were kids. A few of us were fascinated that there a seats that dwindle down to rows of three, two, and then ONE! In either corner of the park there is a row that is just one seat, so one game when we were in high school, in a mostly empty rain delayed game when the Cubs stunk, we waved to each other from the one-seat rows. This is a little before we discovered booze and women.

3. Sometimes people ask if Erik Noisewater is a momma's boy or a daddy's boy, and I put it like this. He loves his daddy. His daddy makes him laugh like crazy. But he needs his mommy. When he starts getting cranky and his mom isn't around he just says "momma" over-and-over, and then when he sees her, he will snuggle up to her in a way he and I just don't. But, I can make that little rascal laugh until he damn near hyperventilates, so we both have our roles. But rarely will he say "dada." He does sometimes, but he likes to point at me and say "ma!" He smirks at me too, and I'm positive he is trying to be funny - and succeeding. He also does all kinds of funny tricks to keep people laughing. The kid is funny and blond, both like daddy. Posted by Dr. Kenneth Noisewater at 8:33 AM 5 comments: