I got an email from my roommate, my new favorite roommate, that said he was participating in a focus group that would be giving us beer AND paying us $100. FINALLY, I was going to MAKE money drinking beer, instead of coming home at 3:30 in the morning to find that I had magically turned all my crisp twenties into crumpled-up ones.

For reasons I can't POSSIBLY understand, the focus group facilitators were scrounging last minute for participants, so the lady who emailed Roomy and I told us to say we were Coor's light drinkers, and not to tip off anyone that we knew one another. When we got upstairs, staggered by a minute and a half as to disguise our friendship, we found many people, both men and women, and there were, in fact, pitchers of beer flowing liberally. Then one of the facilitators said something that I really wish she wouldn't have: "Okay, ladies, thanks for your time. Be sure to get your money on the way out." Yup, we have a sausage fest/sword fight on our hands. 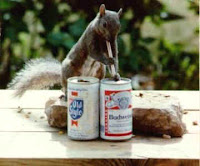 The remaining men sipped beers and answered a woman's questions while one guy filmed us, and another gal typed something on a lap top. Eventually, we learned that the people talking to us were from Miller Lite, and they were trying to figure out what makes people choose a given light beer. The consensus of our group was that we don't care which one we drink - whichever one is on special is a-okay. They ran a bunch of slogans concepts by us they were kicking around, and the only one I remember right now was, "That's SO miller." We all decided that was the gayest* thing we'd ever heard, but that didn't stop roomy and I from saying it all week long. Come to think of it, I'm going to say it to him next time I see him.

There was one participant who must have been right out of college, because he was that guy who thinks drinking is SO COOL. Every time he would talk about drinking beer it was like he was a missionary trying to tell us "the truth." A testimony to his belief in the all mighty beer was that when asked what his favorite slogan of the night was, and I stand corrected, since I do remember one more slogan, it was, "You need a case for that." This ad had guy in a shirt and tie huddled up in the fetal position. I, of all flipping people, had to chime in and say that they couldn't encourage alcoholism like that, and suggest that you're just twenty-four beers away from all your problems fading away. That's ridiculous! After all, it should only take thirteen or fourteen. : )

After collecting our $100, in the form of two crisp fifties, which I've since, once again, turned into crumpled-up ones, roomy and I mingled with a couple of the other participants, and we learned a few things:

1. Some people, Roomy included, are doing too many of these things when he is being recognized from previous focus groups.
2. We all agreed which people, "you need case for that"-guy included, were complete tools.
3. Two of the guys knew each other too, like roomy and myself, but they were smart enough to sit all the way across the table from one another. They told us that we did a shitty job at looking like we didn't know one another. In retrospect, we did sit next to each other, cracked jokes back-and-forth the whole time, and we tried to riff off some of the advertising concepts with our own ideas. We had a really awesome idea, which they have on film, and they really should use. I'd be kind of pissed if they did, but, hey, they'd probably be pissed if they found out I blogged about all this stuff. Who knows, maybe someone from Budweiser will read this rag, rip off an idea, and the next thing you know you're watching a "That's so bud" ad.
4. The gal interviewing us tipped us off that the women she had interviewed just before us said that if they saw a guy drinking a Coors Light, they would assume him to be "white trash."

Okay, seven readers, what does a drink say about a person, especially if you're trying to decide if you're interested in them or not.

* I know it's not politically correct to use that word in this sense, and I typically don't use the term that way, but come on! It is a gayer than shit slogan, is it not?
Posted by Dr. Kenneth Noisewater at 3:50 PM 36 comments:

As some of you know, I make ends meet by working as a photographer for a company that takes pictures of moron tourists in Chicago. I have spent the last three days taking pictures of kids sitting with the Sunny Bunny, named such to keep things secular and politically correct. Here are the highlights:

Day 1: Sunny Bunny (TM) is not officially affiliated with any organized religion, but she has been assigned a gender; female. However, despite the fact that the guy in the suit on Day 1 was as male as The Gancer and even The Cherry Ride, he was prancing and swishing around like Rupaul. One little, Black kid on a field trip came up to me and said, "Did you know it's a guy in that suit? He's tweekin'." I reserved comment so as not to pass judgment, but also due to my limited knowledge of tweekin', I didn't feel comfortable deeming someone as a tweeker or nontweeker.

Day 2: Since nobody wants much to do with an Easter Bunny, or holiday bunny, whatever, after Easter, things were really slow, which gave us lots of time to play charades. I know what you're thinking; charades sucks. But, you have not played with the non-swishy/tweeker Sunny Bunny (TM) working day 2, who is the most expressive, imaginative, kick ass charades player I've ever seen, especially when you take into consideration the fact that he only had four fuzzy fingers on each of his bunny hands. I was guessing all of them, and he did the little back-and-forth motion, which, because he and I had the mojo, I knew meant that he too thought he and I had an uncanny charades connection.

Day 3: Everything went wrong. I couldn't get the damn computers working, and the dude working his second day, despite being very knowledgeable in the martial arts and the one-inch punch, was not much help. I called everyone I could think of to help trouble shoot, but eventually the boss had to come out. He was pissed, and more than a little bit mean to The Gancer, which soured my mood. I was so bent about the whole thing that my charades game suffered.

Okay, I'm thinking of a word, and the category is ME (displays index and middle finger on arm to indicate the number of syllables. He then puts hand up to his own forehead and makes an "L" with his index finger and thumb).
Posted by Dr. Kenneth Noisewater at 3:37 PM 15 comments: