Well, What DId We Learn This St. Patrick's Day Weekend? 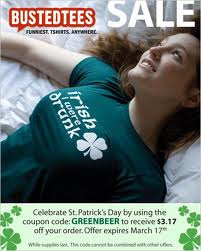 1. It's way better to hear a 90's cover band than hear a bunch of shitty Irish music. Nobody actually likes to hear that crap, do they? Everyone would rather hear Greenday, Nirvana, Mighty Mighty Bosstones, and Smashing Pumpkins than listen to "Danny Boy."

2. If you're nice to your cabbie, he'll pull into a gas station so you can get a diet Pepsi and some chips.

3. If you get off the sauce for a bit and have a diet Pepsi and some chips, you can stay out a little longer.

4. Sing-a-longs at a party are great fun when you have talented people playing guitar and piano and an astrophysicist on harmonica.

5. If a guy is trying to close the deal with a chick, and she grabs your nuts on the way to the bathroom, that's a pretty good sign that your buddy will score. However, she might not be girlfriend material.
Posted by Dr. Kenneth Noisewater at 1:48 PM

Hah, so you don't like the folk music with the violins and stuff. Why did she grab your nuts if she wanted to boink your buddy?

GB: I haven't a clue, and I guess that's why I was caught off guard. She was one of those birds that acts like she's mad at you and hates you, but actually that's her default flirting mechanism. Up until that point I was convinced she hated my guts. Chicks that nutty I can do without, Mr. Bananas.

i totally forgot it was almost st. patrick's day. and what a nice cabbie!

Aubree: You didn't go out an make a drunken spectacle of yourself? I'm disappointed . . .

Aubree is quite underage. So no, she didn't.

Also, I love those girls who act like they're always mad because I just keep egging them on because a). I was never their intended hook-up & b). They're never cute enough to act like turds & c). No one is that cute & d). I'm apparently a natural, accidental cock-block for most everyone that is with me....

maybe i WAS making a drunken spectacle of myself andrew, YOU DON'T OWN ME.
and i'm only a bit underage. someday me and alcohol will be good friends, i imagine.

** tries to imagine someone grabbing her vagina on the way to the men's room at a bar...in public...whilst being hit on by one of my friends....***

hmmmm....nope! Can't seem to grasp this happening to ME! but you, you m'friend....you seem to generate some very interesting scenarios. Unimaginable at times! :P

Good to read you today...I've missed it.

why do people celebrate st pats the weekend before? its not until this thursday... unless you're going to do stuff this weekend, as well. in which case, congratulations, your social life is more happening than an attractive single 23 year old girl's

Drew: Yes! Nobody is that cute!! Great call.

Bree: Yes. And your worst enemy. Sometimes in the same night.

Lynn: Yeah! Where you been? Virtual vagina grab coming your way.

Jov: A little too social. Monday was rough.