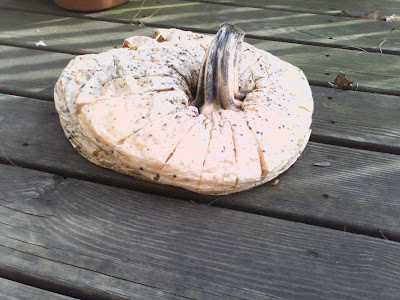 Did you know, and why would you, that if you leave a pumpkin out on a Chicago porch for a few months of awful Chicago weather, it deflates? Well it does,
it's sitting on my front porch, and it looks just like this.
Now, if this were some kind of science experiment I were doing with my son, I would say, "Good for you, Dr. Ken!" However, when this is just typical of the sort of thing I let happen around this place with my five roommates, well, then I say, "Not so good, Doc."
Yes, I finally have a move out/grow up date, and that is July First of this year, immediately following the roast on June 3rd. Yes, we're having a roast with all the people who have lived in this 5 bedroom house over the years, and there have been some characters over the years. The idea of this party is to tell embarrassing stories about one another, and then the significant others and

spouses can show up afterwards for a party open to the general public.
I just hope I don't end up the butt of everyone's jokes like Courtney Love, but I have a feeling I will.
Posted by Dr. Kenneth Noisewater at 11:02 PM

just keep your panties on and it'll be alright

Gorilla: Hey! Watch it! Special Lady Friend - not girlfriend, and no, moving out solo. : )

Sister: No, it will be nothing special. I want it to be super small like a shoebox so there's less to mess up. Just want to be alone so I'll get more writing done.

Andrew: Not yet. I actually pushed off the move until Sept or Oct. Maybe Nov. I'll never get out of here. Damn Peter Pan Syndrome . . .

Just remember to shave your bush in case you get a little too loose around someone with a camera.