Around the time that the Sex in the City movie came out, I saw that a lot of women were taking online quizzes to figure out which character their personalities were most inline with. I'm sure lots of women learned about themselves from filling out those questionnaires, but the results don't concern me because I'm a child of the 1980's; therefor, I want to know which Golden Girl best represents my readers (male and female).

Those four silver foxes could solve all the world's problems in their robes while eating cheese cake until the break of dawn, but each had to play their part.

Which one are you? 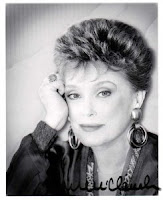 Blanche Devereaux: She's a bit of a slut, but she expects men to wine and dine her, given her southern belle upbringing. If you're a Blanch, you have dated a lot of men over the years, and you may continue to date within your retirement community. You've slept enough men to win the war in Iraq, but if anyone points that out, you're appalled at the characterization.

Rose Nylund: She's a sweet, sweet woman, but she's not too bright. If you're a Rose, you're a simple woman, and that's not necessarily a bad thing. Sometimes the world needs uncomplicated, nice, harmless people.

Sophia Petrillo: She's a wise-cracking chick who tells a great story. If you're a Sophia, you're often holding the floor at a party with a great story or perhaps stealing the show with well-timed one-liners.

Dorothy Zbornak: She's smart but cynical. If you're a Dorothy, you're very insightful and funny, but a bit of a glass empty gal.

If you must know, I had a Blanch period a few years back, I have dumb moments like Rose, I can be a little too Dorothy for my own good, but I think overall I'm a Sophia.

How about you, seven readers?

Also, check out the Facebook group for the play I'm writing/producing (The Loitering Hole). There's a video of me to watch, which, for many of you, may be the first time you will see Dr. Ken live and in color.

Also, check out the review I did of the new Guns N' Roses record where I compare it to a can of Dr. Pepper.
Posted by Dr. Kenneth Noisewater at 8:42 PM

i have vague memories of watching the golden girls when i was a wee lass. one episode in particular, when blanche thinks she's pregnant but she's really just going through menopause. and they all sat together and reminisced about their periods. pretty shocking stuff.

and im emerging from my blanche period as a dorothy.

hahah. i think i'm dorothy. glass empty of course. but half empty with a nice stiff drink :P so which SATC character are you then doc?

I'm totally a dorothy. And a Miranda in Manhattan...

Jov: A bunch of old ladies talk about their periods? That would never make it on TV today, and that's a damn shame.

Log: I'm Carrie because I'm a writer - with less of a horse face. WOW! That was mean. Actually, she manages to be cute despite the so-so face because she's so darned charming. I had best work on my charm. This horse face isn't doing me any favors.

Donk: You're a Dorothy-Miranda. I think presenting people with both characters is even more fun!

I'm mostly a Dorothy, but can be a Sophia at times, especially when drunk. I'm not much of a Rose, but I, too, had a Blanche period.

I used to watch Golden Girls with my grandma all the time, and one of my ex-roomates saw the set. I was very jealous.

Dont forget, if you like cheesecake at midnight... you're all of em!

Well, like many middle-aged white guys, I am only a wig, a dress, and some mascara away from LOOKING a lot like Dorothy Zbornak...

But I have also done some very bad things--not "you-should-be-tried-at-Nuremberg"-things, like "Stop or My Mom Will Shoot," but bad things. So I identify with Sophia Petrillo. Also as I recall she shtupped Spike Jones. (Not the director the horizontally-striped, vaudeville novelty song guy...)

I don't know if I would go that far but I think I bought a record once...

You know for personality types, I think most guys would rather play, "Which 'Mad Men' character are you?"

It's um, certainly less disturbing than contemplating yourself as an old hag with hot flashes and a worn out squack that looks like a very old squirrel that had a hard life...ahem, back to "Mad Men"--

I would say I am post-heart attack Roger Sterling. (I didn't have a heart attack but I had a similar life-changing wake-up call.)

Though I have a lot of Oriental stuff in my office like Bert Cooper and everyone always comments that that is because I "march to my own drummer," "just have that because I am 'creative'," etc. I don't make people take their shoes off or any REAL weird shit like that...

Nut: It's good catch girls in the Blanch/Rose period: dumb sluts. Only kidding.

Zen: Again, you allude to a drug problem or something. I want either a heart-felt post about your recovery or just a real funny post about when you used to get F'd up. Come on!

Zen: PS, I'm sure you're holding up better than Dorothy.

I have actually taken a quiz on this. I am a cross b/t Sophia and Dorothy. I'm not so much Rose and sort of regret NOT going through a Blanch period.

As for SATC I am a cross b/t Miranda and Charlotte. Very girly but also very sarcastic/cynnical. I thought Carrie was a BITCH.

And for the past Halloween/Christmas parties etc. (and everyday if I could without people thinking I was mental) I have been dressing like Betty from Mad Men but hopefully I'm not really mental like she is.

I love those bitches.

But others may say I'm, a total DOROTHY.

I'd say you're a combination of Dorothy and Sophia: A raging lezbo with late-stage Alzheimer's.

well, i am clearly an odd mix of Blanche and Sophia. i mean, i'm a charmer, but i've also got a sharp tongue and can spin a mean yarn.

@zen "...and a worn out squack that looks like a very old squirrel that had a hard life...

dude, you just about made me choke on my frosted flakes. thanks. dick. heh.

As I strained for the appropriate metaphor, a furry tailed rodent scurried across the front of the sliding glass door if the porch of my humble abode--seemingly preoccupied with his one-acorn bounty. Turning to me at the last moment, his eyes seemed to bore into my soul and say, "Age is just a state of mind. But tell that to my thighs!"

I took it as an omen.

Merry Christmas sweetie! I've missed you. I'd be Blanche for sure ;)

Bradshaw: I think you're a Rose. Not because you're dumb, but because you have a ditsy voice. I mean that as a compliment. I like women who sound ditsy but are actually smart.

Kay: Did you just call the GG bitches?

Dyk: Yeah, that's pretty much right on the money. Thanks, Dyk!

Chud: You do spin a wicked awesome yarn, like the one about you almost snarting.

Steph: Awwww. Same to you, Blanch!

Dorothy. One can never go wrong with Bea Arthur. Never.