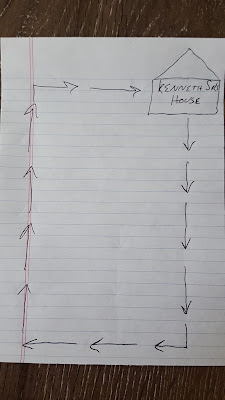 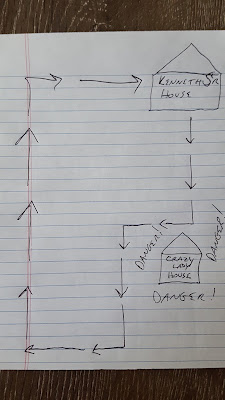 What do you think, friends? Anyone have any weirdos in their neighborhood or anywhere else that you find yourself avoiding?
Posted by Dr. Kenneth Noisewater at 2:40 PM

i find taking a german shepherd/pitbull cross with me puts the shoe on the other foot. i don't have to avoid the loonies, they avoid me.

Rosewater: That probably does the trick. I would train my dog to bite born-agains that try to force their religion on me. Maybe not bite. Just growl, perhaps.

Aren't you proud of your old man for being such a hit with a ladies? Well, the crazy ladies anyway. If he sees her again, he should turn down coffee at her place but
let her massage his shoulders. That's a fair compromise, no? A shoulder massage can't be bad, even from a crazy lady.

Crazy women are often very good with their hands, but I don't think my mom would not be cool with any physical contact between the two of them (Aside from shoving her into the ditch).

The last person that popped out of a bush and said 'Have you found Jesus?" I replied with yes, he got me drunk and took advantage of me one night!!! My neighbors? I live in New Hope...land of the quirky and camp so draw your own ending on this one,lol!

Awesome story and even more awesome because of the illustrations. Thanks Dr. Ken. Best of luck to Kenneth Sr. on his excursions. And you are mentioned by name on my most recent blog post because I failed in your request to take pictures of me and Tank having fun while the kids were away. Sorry buddy.
Just enjoy the Cubs kicking the shit the Cardinals this weekend.

We tied the Cardinals this week. The Cards really get up for these games. When you're the best team in baseball, everyone you play is playing like it's the World Series. Just glad we got Madden to keep there kids grounded and keep their minds right. Glad you enjoyed the post, and thanks for the mention. Give my regards to Tank Diesel Shife.

We tied the Cardinals this week. The Cards really get up for these games. When you're the best team in baseball, everyone you play is playing like it's the World Series. Just glad we got Madden to keep there kids grounded and keep their minds right. Glad you enjoyed the post, and thanks for the mention. Give my regards to Tank Diesel Shife.

I live in Brooklyn, and my neighborhood is full of the crazies. We've got a Russian lady who lives down the street that is friends with ALL of the cats. There are also a lot of people who like to sit on my stoop and do copious amounts of drugs at all hours of the day. I was going to work last week around 7:45 a.m. and there were two people sitting there that were super wiped out. Not cool. We also have lots of the Jesus people. The worst are the ones who look normal and come up and ask if you've ever heard of god the mother and then won't leave you alone. Those are the ones to look out for. However, none of them have ever hit on me.

Grand: Ha! Sounds like your part of town has lots of character. My brother-in-law lives in Brooklyn, and the orthodox Jewish folks are rocking it quite a bit in his part of town. I always think of Krusty the Clown's dad when I see them. You have to start blogging again, dude!