I'm watching all the Star Wars movies with my eldest of two sons, Erik. I was going to wait until he was a  little older to delve into the films because of some of the violence, like Obi Wan lopping that pig faced dude's arm clean off in A New Hope with blood everywhere, but the night of the Capitol insurrection I had a few to many coping drinks in me and just said to him, "You want to watch Star Wars instead of all this news?" He has a few Star Wars books and knows that we have not watched the films due to the violence so he capitalized on my moment of weakness and gave me an emphatic yes!

Here are a couple of interesting thoughts Erik had about the movies: 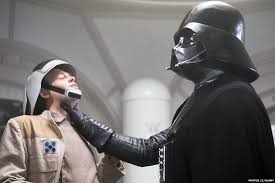 3. When Erik gets pissed off and snaps and throws stuff and hits his little brother, I remind him that Kilo Ren does that sort of thing when he gives into the Dark Side and his fits of rage. He also ends up killing his own father, which I'm totally not cool with and make a point of drilling that into Erik as being a not-so-good thing to do.

So the other day when we are getting into the car in the morning, while Erik is crabby about God know what, I'm reminding him how he needs to take deep breaths so that he doesn't give into his anger like Kilo Ren, Erik says, "But Darth Vader uses the Dark Side, and he takes deep breaths." Damn it. He's got me. I tried to explain that Darth's sounds of deep breaths are the machines keeping him alive due to his injuries in the molten hot lava and not at all a coping skill to avoid angry outbursts, but I was tired in the morning, he had me, so I just said "Yeah. You got me there. Let's go to school,"