I was going to do a post about things that I wish I'd accomplished by this point of the summer, but I got hung up on one thing I've yet to take care of this seson; I'm yet to make it out for a camping trip. I love camping, but maybe my idea of camping doesn't jive with yours. Here are some bullet points to illustrate what I like about getting at one with the great outdoors.

- I like to drink loads of bad/old man beer like Old Style or Miller High Life. If there's some pot involved, great, but it's not necessary. 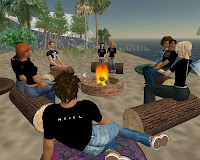 - I like to sit around a fire and bullshit about life, love, the universe, God, baseball, rock music, or whatever else. There's something about a fire in between a small group of people that makes a discussion become suddenly more important and enlightening. That's a fact, and it has been that way for thousands of years; we've just lost sight of that, somehow.*

- If you're a city dweller like me, stars a big selling point to camping, since all of the city's lights drown out the celestial bodies in urban areas. It's especially nice when you have a campsite encircled by trees, perfectly framing the stars.**

- I like zipping myself into a tent for some drunken tent sex, preferably not by myself.

- I like foraging and exploring for random things, be it sticks to throw into the fire, sticks to roast marshmallows, or even just a walking stick. All right, fine, I guess I just dig on sticks.

- I like to cook things in the fire, from hot dogs on sticks, to tin foil packages full of beans, to English muffin pizzas. No grills are allowed when you camp with Gancey, and things eaten without use of the fire are to be used sparingly.

- I like little adventures when I camp, like stealing a farmer's corn, running my car into a ditch, barfing on a fuse box, drinking Pick N' Save vodka during a monsoon, swallowing a bee with my Old Style, and asking someone coming out of a titty bar how to get onto the highway.**

- I like not showering for the duration of the trip. I typically am only gone for a weekend, so it's not too foul, just long enough for my blond hair to get dirty, sticky blond.

- I like peeing out a campfire, but only on rare occasions because it really, really stinks.

So, how does all that sound? Does this sound like your idea of a good camping trip? What did I leave out?

*I don't, however, want to camp with these trendy, computerized lame-o's.

**Bonus points to you if California Stars by Chicago's own Wilco is playing on my blog's music player as you're reading this, since that would be a one in seventy chance.

***All of these things happened to myself and others during my camping trip experiences.
Posted by Dr. Kenneth Noisewater at 11:23 PM

dude, i just had to bail on a camping trip this past weekend. seriously, i love the camping. tent sex is teh awesomist. and yeah, half the adventure is getting to and fro the campsite. also, the people you meet at campsites is freaking hilarious.

Going to the cabin is the closest I get to camping...However, when I'm there I would rather bathe in the lake than take a shower, and I typically rarely go in the actual cabin itself, except to sleep...and use the bathroom...I think it would be pretty hard for a girl to "pee out a campfire"...and quite possibly extremely dangerous potentially giving new meaning to the phrase "fire crotch."

Weird...that was me above, I think it signed me in with my other gmail account...strange...

Sounds fun to me. Especially the sex in a tent part.

There's nothing better than a good ol' drunken campfire discussion interspersed with some charred marshmallow devouring.

Okay, except perhaps this tent sex of which you speak.

This is what camping should be.

ok i completely want to go camping now. but i'm with you. i love seeing the stars which are strangely absent from city life. and beer, outside, with a massive pit of fire??? how could you go wrong.

...i'm not as fond of the peeing outside thing though

California Stars was not playing, but since I believe it to be the ultimate camping song, do I get the points anyway?

Tent sex is always a risky activity because your other friends are totally listening in on you!

I would suggest going to Sand Creek Campground by the Indiana Dunes, but only if you want to fear that you are going to be part of a satanic ritual. But, hey, you're kind of metal, you might dig that.

That sounds like a perfect camping trip! You have to add playing cards/ drinking games by kerosene lamp.

I don't know if CAMPING sounds better now--wait, is booking a suite at the Bellagio on Hotels.com, "camping"?

The Frontier would have been camping, because it is "the frontier"...but that ship has sailed since they imploded it, I guess.

If a hotel only has one "star," I guess I call that camping. The Motel 6 is camping--anything with a "6" or an "8" like the Regal 8--as well as any hotel that has crime scene tape over the door of at least one of the rooms when you check in. And if you check in and the desk clerk is behind bulletproof glass, that's camping.

I love camping! Especially on the beach. But when you camp on the beach, tent sex is out because sand in your hoo-ha just ain't comfortable.

Gancy, you just made me want to go camping.

Chud: Great point about the random people. I was going to get into some stories in that rhelm, but I wanted to keep it brief. I remember a really cool white trash couple listening to Def Leopard Hysteria real early in the morning . . .

Jennifer: I'd like to mee the chick who can pee out a fire. And marry her.

Essent: That part is good stuff, unless it's during the day with all the heat locked in.

Fawl: Tent sex kind of trumps lots of things, but I can do it just about anywhere (and have). To me, it's about the times around the campfire.

Log: That's what it's all about. Where do you pee when you camp?

Cherry: Yes, it's kind of bad form to get down real loud when your friends are pitching tents next door. Hmmmmm, that sounded strange. As far as the points go, you always score points in my book, brother.

Classy: I am metal, but not hardcore metal quite like that. I have to quote some Megadeth real quick: "My friends all say, 'Hey, Dave, you're metal anyway, hey!'"

Nut: Drinking games by kerosene light! That's almost as good as bumping fuzzies by the dashboard light, or whatever that meatloaf song was all about.

Zen: Love your notion of hotel camping! Hahahhaha. Every room I check OUT of seems to have that tape on it shortly after. Weird, huh?

Charm: Nobody wants a sandy hoo-ha. You need a tent with tall enough ceilings to do it standing up.

Last year I went on a camping trip and it was unseasonably hot, I'm talking 107 in the shade. I proceeded to drink my weight in shitty beer then pass out from dehydration. Good times. We also got attacked by a rabid pack of raccoons. Great trip.

Again, if the outdoors were so great, they'd put them indoors and charge admission.

I like camping if at the end of star gazing I get to sleep in a cabin or on an air mattress...sex is just a bonus to that.

I do hate bugs though.

You covered all the necessities of camping...except jumping in a secluded lake or river. I need to get back to my old-man-beer-drinking, food-thrown-in-campfire-eating, tent-sex-having roots.

Chards: A really hot camping trip can be rough, but not as bad as a real rainy one. The trick with the racoons is to make sure all the food items go into the coolers, cars, or both when you go to sleep.

Jake: Have you done that? If so, Kudos bars to you!

Sass: I'm all about the bug spray to keep those suckas away, but make sure you buy it ahead of time. They go up your ass for it in the sticks, cause they know you need it. That didn't sound good . ..

Sabina: Those roots have been good to me!

My lungs start acting weird whenever I breathe in too much fresh air.

Make sure and play a rousing game of, "Fuck, Kill, or Marry" around the campfire.

Well I like camping to, I just posted a camping related myself, before I read this post.
Yep, cold beer, warm fire and a tent full of woman to keep me warm, thats right up my alley.

This song makes me want to make out with my roomie.

I posted about the bumping of the foreheads.

And I miss camping.

A lot. It's what we do in the Midwest for fun.

Grant: True. Sometimes you have to run home and suck in some air conditioning to get back to normal.

Zen: That could kill HOURS of time.

Josh: You sound like you're a man after my own heart: a man who enjoys the simple things in life.

Clumsy: That is going to get strange in a hurry. I went by and commented.

Wow, there is so much effective info above!
French Twist New England Boiled Dinner

For my part every person may read this.
cute headbands | fringe dress | medicare card