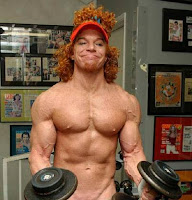 . . . intense the Olympic drug testing is. Apparently you have to let the drug guys know where you are 24 hours a day (which shouldn't be a problem if these athletes have Twitter accounts), and an inspector randomly comes out to see you. If you're not where you say you're supposed to be around three times in a month's time, you're off the team.

Every athlete must consent to this, even the U.S. Curling Team. Yes, curling, where you get down on your knees and gently push a granite stone while your teammates aggressively brush in front of it. Actually, it's a lot like shuffle board, the game retirees play down in Florida.

Now, I can see where maybe a juiced up sweeper could maybe give a team a slight advantage, but few could argue that the guy slowly releasing the stone gets any kind of benefit from performance enhancing drugs, except for maybe his quads looking better in the tight pants.

What do you think, readers? You think all athletes should be subject to drug tests? I'm coaching chess right now. Should I test my kids for 'roids?
Posted by Dr. Kenneth Noisewater at 4:44 PM

chess is notorious for hgh, how did you not know that?? get those kids tested asap before you risk a DQ at the next big chess tourney!!

All I know is that Carrot Top scares me.

And that steroids make your testicles shrivel up to the size of tiny acorns.

Stay off the juice.

Jov: I didn't know this. What would I do without you?

Jen: You'd think the whole nut shrinking thing would be enough to keep people from messing with the stuff, but what do I know?

Also, if you look closely at this Carrot Top photo, it looks like Carrot Top is working out naked, making it that much more creepy.