If you go back a post or two, you'll see that a crack head went poo in a bucket in my backyard and tried to kick my landlord's door in.  And there is video of it.  A really gross video with zero wiping involved.

Mrs. Noisewater and I were just visiting her brother in Brooklyn, and it turns out he too had criminals caught on tape outside his building trying to steal and performing bodily functions - that is if tweaking is in fact a bodily function.

Apparently this duo sat outside the building robbing packages that arrived, and all the while the female thief shook her rump.  And you'll notice she is a tireless twerker.  As one resident noted:

"I'm not exaggerating when I say she did this for an hour...For an entire hour. Rest breaks were had, but she got right back up and dropped it like it was hot, often times on the lap of the man."

Now that's a good team member right there.  Thievery can be quite an ordeal, especially when you're waiting long stretches for the UPS guy.  That's when a quality crime buddy steps up and gives you a lap dance to help pass the time and keep your spirits up.  Hats off to her. 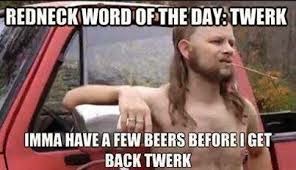 Of course, neither one of us is telling our parents because we don't want them thinking there are insane people everywhere pooing, robbing, and twerking everything they can get their hands and butts on.  But moms and dads, if you're reading, the hoodlums in both scenarios have all been caught.  And I hope the judge orders that their surveillance videos be aired on the hour in the mess hall.
Posted by Dr. Kenneth Noisewater at 4:25 PM

In my neighborhood, someone would have called the police on her just for public twerking, but that is neither here nor there. Anyway, I know people have been wondering whether Miley Cyrus has been a bad influence or not, I think this video gives us the answer. Or maybe it doesn't. Whatever.

Law-abiding citizens do no shake their behinds outside a stranger's front door. Your brother should have shot her in the butt with an air gun. If that's not legal, the law is an ass.

Jimmy: in your neigborhood, lives may have been saved. Yes!

Bananas: Not my brother. My brother in sort of law. Either way, an air soft gun shooting would have been terrific.

I must thank you for this enlightenment. Being sheltered out here in Idaho, we don't see much stuff like this. Wow. Just wow. It does all kinds to make the world go round. Thanks again Dr. Ken for expanding my world view.

Shife: Not having stuff like this out there might be a little less exciting, but being safer is better in the grand scheme of things. Keep it real, Shife. Potato love!

Fred: Yes. Lap dances make the world go around. She is a real team player.