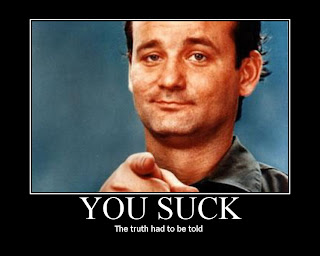 *That one actually has been disproved by most experts (read drunks) because what really matters is how much booze you pour down your esophagus, not the order in which they go in. Either way, if too much goes in there, it's going to come back out. The only thing does make the expression hold true is that if you have 7 or 8 beers in you, you may be pouring in hard liquor without knowing how much you're really boozing. Then again, if you have 3 or 4 cocktails in you, you may throw back beers like they're water. No, I was right the first time: it's a dumb concept.
Posted by Dr. Kenneth Noisewater at 2:48 PM

actually your body metabolizes liquor differently if youve already ingested beer. the worse hangover you get is, however, more easily attributed to the quantity of boozes in you.
this message brought to you by the letter drunk, and me still in bed hungover at 7:30 pm.

ill come back later with some ass phrases.

Okay, this one had me laughing. I would SO much rather be called a "bitch" than to have people think I suck!

Oh, and don't pinch without the paper?

I was about to debunk the beer/liqour myth myself.

"BEFORE YOU SIT TO WAIL, MAKE SURE THERE'S CHARMIN FOR YOUR TAIL".

Heff: There's only one way to disprove that one: Drink 5 mixed drinks then 5 beers on two different nights, switching the order, and recording the results. I think you are up for the task, perhaps during Butlik band rehearsals

If someone says you are an asshole, at least they are saying you have a distinctive personality.

What do we exactly mean when we say somebody "sucks"?

I think we mean they drain the very joie de vivre that was once at the party, and leave the room worse off for having entered it, like a black hole in the universe.

So as we can see, it is better to be an asshole than to "suck."

I don't even know the guy and I understand exactly how awful he is because of the "that guy sucks" phrase.

And really, don't kill yourself with a corkscrew. It's hard to clean the blood off because it's all corkscrew-y. You don't want people saying "We couldn't use the corkscrew to open the wine because that guy killed himself with it... That guy sucks."

"Beer before liquor..." hasn't failed me yet. Unfortunately, that rhyme needs a section for what happens if you drink beer and liquor simultaneously.

As for a poopy rhyme, how about...

Check the roll before emptying your hole?

Don't pop a squat unless there's paper by the pot?

Before you drop a deuce make sure the toilet paper roll has not been a victim of paper abuse.

If you are taking a dump make sure the toilet paper roll is nice and plump.

Toilet paper must be legit before you sit and take a shit.

That's all I got. I need to drink heavily before I can give you anything worthwhile.

Strange, I had the almost exact same conversation with Josh regarding my derelict neighbor. I believe my exact quote was "Baby daddy sucks."

And he does suck. He's a freeloading douche bag who mooches off his parents, while living at home with his on again off again girlfriend and their kid. When he's not inside practicing his unconstructivness he's shooting baby animals out of trees with his bb gun.

Charm: Quite true. I'd hat to have people say that about me for ruining the party, especially if I didn't get the job done and walked around with the corkscrew in my head all night.

Shife: 3 very quality phrases. Hat's off to you, sir!

Jenni: Have you blogged about this fella?

a bird in the hand is worth shit paper.

of course the one that just hit me:

more than a pee pee? check for TP.

why did the chicken cross the road? to check for shit paper.

Chud: More than a pee pee, check for TP. Brilliant! I would expect nothing less.