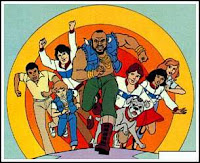 Readers, any thoughts on any of these random-ass updates? Who's my reader who's gone the longest without having "pukeded?"
Posted by Dr. Kenneth Noisewater at 6:54 PM

I believe you were present the last time I puked. At that particular apartment party at Richard's place. I am a winner.

I find it unacceptable that there are adults out there who do not know who Mr. T is. I weep for the future.

Okay, really? I thought that Mr. T. was known by everyone. Yikes, another sign that I am really old. I have gone a really long time without having "pukeded" from drinking. It's only been a few months though for legitimate reasons. I actually pukded at work from the flu. I felt sick all day and had a brief to file by 4:00. I literally hit "send" after finishing it and ran down the hall and pukeded. Nice.

And WHO doesn't know who Mr. T is? I pity those fools!

I would think it would be very hard for a NON-douchebag to even compete on "The Bachlorette."

If Henry Kissinger was on "The Bachlorette," would the Vegas money be on HIM?

I think not...too much "reminds me of my dad"-factor; not enough appreciation for a coherent explanation for Soviet hegemony in the 20th Century...

Cherry: I WAS there that night. That's the last time I wore a panda suit.

Sista: That would suck if you classically conditioned yourself to bar every time you filed a (gag) brief

Beck: I PITTY THE FOOL! Love it.

Zen: Plus, Kissinger was really, really ugly, and his abs wouldn't cut the Bachelor mustard.

last time i pukeded was may 17th at about 10am. it wasnt so much of a puke was it was a yellow phlegm/stomach acid heave, but hey, nobody's perfect. that is, incidentally, also the date and approximate time of the last time i got laid, fun fact.

I asked a handful of interns that are barely scraping 20 and they all knew who Mr. T was so thats strange they didn't know.

Last time I puked was when I ate that black and white cookie while we were waiting for the chocolate bobka. I think I had David Duke and Fahrikan fighting it out in my belly.

Well it has been awhile since I "pukeded" but my 10-week-old son has been "pukeded" all over me the last few days. Life is great.

I wish I could have puked on Saturday morning. I would have had a much more productive, non-hangover kinda day!

Why don't they have a show called, "The Adulterer"?

It would be a guy who is ALREADY MARRIED--perhaps a DILF (defined infra)--and women would compete on who gets to get schtupped and lied to about how he is going to leave his wife someday, taken incognito to very dark restaurants, and bought expensive presents out of guilt.

Who doesn't know who Mr. T or A-Team are? Were these people stuck in a bomb shelter for the last 2 decades?

On a similar note, I was playing an old Ms. Pac-man machine the other day when a younger pal of mine came up and asked "So how do you win at this game? Do you have to kill the ghosts or something?"

Words can't describe the look I gave him.

jov: Huh? I thought you were always getting laid. Maybe just everything but?

Heff: Seemingly. Have a read!

Shife: My nephews always seemed to save up all their puke for me. It's a fine tradition.

Donk: Better out than in.

Zen: I like it! If Zen were producing shows, they would be more entertaining but more twisted, both good things, to me.

Polk: Well, he's almost right. Eating the ghosts will get you more points, but the goal is to keep clearing stages, whether the ghosts get eaten or not.

My other idea is "Polka of Love," where 16 impossibly beautiful women fight like cats over the slim chance that they will get to exchange body fluids and pick up the underwear of washed-up Polka star Weird Al Yankovic for the rest of their lives--unless he flakes out at the last minute so we can have "Polka of Love II," et sequitur. Then they will pretty much be forced to hang around the bowels of Hollywood hoping some second tier agent wants Weird Al Yankovic's sloppy seconds...

This would be a very unique show and I can't think of anything on TV that is remotely close to it just in a different musical genre. So like I said this is a totally original thought that I had on my own...

Zen: Phenomenal. I would have one competition between the ladies be a hot dog eating contest set to Weird Al's "Eat It." That would be hot as hell.

Last time I puked was morning after the Loitering Hole cast party. Jager bombs did me in. Not sure why I thought that was a good idea.

summer is my off-season

Igloo: Surprised those Turkey Bombs didn't do you in. Thanks for coming by. Your review is going live in like 10 minutes!

Jov: Don't forget to train in the off-season. You don't want to pull something.

That's a helluva "pukeded" streak! I'm going through old blogs for ideas for sketch comedy and saw this.