This guy is as appauled about smoking as Marsha was when Greg lit up!


There is a site called Every Block that notifies you about things going on in your neighborhood, and thank God because the Oz Park Advisory Council uncovered startling and unsettling news about teenagers smoking marijuana in the park after school!  Can you imagine?  I'm posting some of the funnier entries below, along with my smart-ass commentary, of course:

Many residents posted entries in support of this guy, including this person who wants a stop to this marijuana use before it leads to robberies!

Then we have an actual voice of reason, albeit a long-winded voice, followed by another moron. 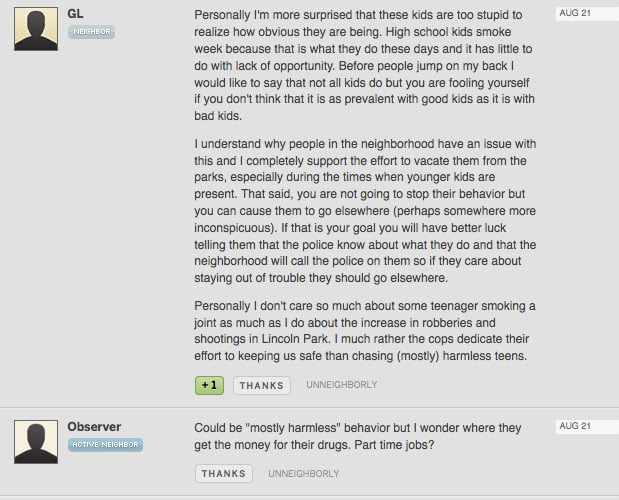 Along comes Pete who witnesses how weird this grown man is taking pictures of kids he doesn't know, and then Ozlock defending his weirdness. 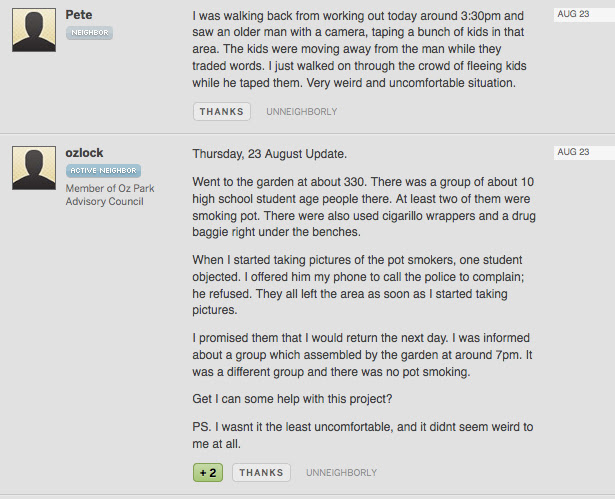 Then it just turns into a long debate with people chiming in with all kinds of stupid stuff.  I just like that someone pointed out what a creep this guy looks like with his camera.  Get a life, buddy.  Or move to suburbs.  Oh, wait, kids smoke dope there too.  Maybe he should just get a job.  Who has the time to chase around pot smoking kids at 3:30 every day?

I wanted to chime in with some funny comments in response to this guy and share them with you guys, but the crazy ass posted the Facebook accounts of people who stood in his way of his private drug war, so that scared me off.

What do you make of all this, Seven Readers?

Oh yeah, and there's a new post by Urbanist Chic over at The Liars Club, so be sure to leave a comment there if you have a moment.
Posted by Dr. Kenneth Noisewater at 4:53 PM

I just hope that guy doesn't drive the kids indoors, where they'll force innocent house pets to inhale their spoke. Aren't there any rich rock stars who could let them use his back garden?

Offer him a hit, it's would be the kind thing to do. I mean, didn't we all offer a fellow "head" a toke?

Those darn kids. What the hell is wrong with them? I mean all of us grown-ups never did anything like that at all.=) I know it is a nuisance and probably a pain in the balls but kids are going to be kids and hopefully they just have some harmless fun. Have a good weekend, Dr. Ken.

goddamn stoners, with their...stoning, and what not.

i say take the creepy camera guy to the strip club and give him something better to obsess over. let him channel all that energy into giving us some money.

which we will then spend on pot.

Gorilla: Right. As if there is nowhere else they will smoke the stuff. And I think he is full of it when he said they tried to get a dog high.

Bama: He would much rather film the pot smoking than partake. What a goof ball.

Shife: Nope. When this guy was a kid he never did things like that. He just told on others and hopefully got his ass whipped.

Victoria: I support your take this weirdo to the titty bar campaign! And him filming THAT instead.