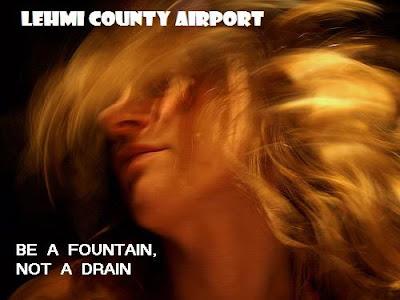 I got my mythical band name, album title, and album cover photo from a post that Cherry did recently. You click on links to get the necessary names and pictures at random. Cherry helped me write the words on the picture, because I'm really dumb when it comes to computers, and most everything else. Thanks, Cherry! Now, a little about my mythical band . . .

Lehmi County Airport is led by left-handed guitarist, singer/songwriter, and self-proclaimed genius and doctor, Dr. Kenneth Noisewater. Their first two records came and went without much fan fair or critical praise, both grossing less than the band's staggering bar bills, but they are standing on the verge of a breakthrough with their latest release, the self-indulgent, self-depricating, minor masterpiece, Be a Fountain, Not a Drain.

It takes a few listens, roughly 30, for this album to grow on you. The first 10 listens you'd sooner have your femur bone cracked in half, the next ten you're really annoyed, but you tolerate it, the next five you find yourself bobbing your head, but still a little annoyed, suddenly, during the next three listens you're in love with this record and don't see how you lived without it, you hate it again upon listen 29, but then after 30 you're back to wanting this record to make love to your butt.

Also, head over to The Liar's Club, a Chicago topics blog updated hardly ever by Cherry, Classy, Niner, and Myself. I'm actually kind of proud of my latest LC post, and it's not even mythical!
Posted by Dr. Kenneth Noisewater at 7:38 PM

During all of this time I'm listening to the album, am I drinking? That may explain my acceptance.

Smack Dab is running another Guess the Boob Competition honey if you're interested :)

This time it's open to men too, so if you want to send in a picture of your nipples, please do so!

I love how you've actually made up stuff about your mythical band.

wow, that's a whole new way to express appreciation for a cd right there.

I don't think I've listened to any album 30 times.

But if it will make me want it to make love to my butt, then maybe I'll give it a shot.

No post is complete without someone wanting to "make love to your butt."

Also, how does a few equate 30? I always thought a few would be like 3? I guess I'm wrong agian.

I would mythically buy the hell out of that album. Maybe I can be a band-aid like in Almost Famous because I am assuming you would have some hot chick playing keyboards or a triangle or just standing there showing off her boobs.

The album hasn't grown on me yet...although I do have an unpleasant looking formation on my scrotum.

Smack: I will certainly vote on that. Boobies make the world go 'round.

Airam: I also have to credit Cherry with making up shit about the band, but thanks!

Jersey: Yes. Our band has that EXACT sound.

Chard: "Few" was used for comedic effect. If only I were funny, then it would have been effective . . .

Shife: You're in for a band-aid, and yes, there will be a girl playing the triangle, wearing only band-aids.

Dyk: Sorry, man. That's a side effect. We need to put that on the fine print on the record.

I'll only run to the nearest mythical record shop if there is a guarantee that after 30 listens the record will make love to my butt. let's be honest here.

I love that you have a backstory for your band. That is really a nice twist on this meme. Oh, I see in reading the other comments that airam already said that. Oh well, I'm leaving it anyway.

If I had a band, it's name would be Times New Roman. I've thought about this for years.

As for the lack of comments... I'm sorry man. You know my thoughts on the comical hierarchy. I don't feel significant enough.

My question is, does it rot, rock or rule?

i had an "air guitar"/"lyp synch" band named bloody big knife a few years back. we rocked out. albeit silently. but to the untrained eye, we were pros. total bamfs.

Thisday: I have a guarantee sticker on every disc. It will happen. Patience . . .

Radio: The backstory is true. Mostly.

24: You and your band are more than worthy in my book, little buddy.

Classy: Depends on which listen you are on.

Since I'm so busy now, I only have time to support mythical bands. Thanks for making it easy for me!

Where can I buy this Lehmi County Airport album you speak of? And how about the latest from Times New Roman?

I think these bands would make it.

I am glad that someone else besides myself is a "self-proclaimed genius."

Love the tunes by the way!

Oh, and anyone who has Tesla's "Love Song" on their play list is FREAKING AWESOME.

Pistols: Glad that works out! Just to keep you in the know, we have a regular gig at Bubba's Stir Fry and Titty Bar. Check us out!

GGW: We have a gig with Times New Roman, as well as Cherry, Niner's band. We're all playing Blogapalooza.

Cork: I would think you'd drink to being a drain, since that would mean liquid would flow straight down. Either way, thanks for coming by again!

Jenni: Believe it or not, that song inspires me. Okay, I know. It's hair metal. But I love how he says, "You'll find love again, I know." Even when I feel like complete shit and think I'm going to die alone, I believe that long-haired fella when he sings it to me.