I was briefly dating someone a few weeks ago, before doing the classic, classless Dr. Ken phase out, and at the time, I was helping her brainstorm for costumes. I actually think I nailed the perfect getup for her. Because she is about 5'1", and she sort of looks like a little girl in that regard, I thought she should dress up as Vicki the suburban robot girl built by her father, disguised as a regular girl, despite talking just like a robot, from the God awful 1980's sitcom, "Small Wonder." Only here is the twist: a slutty version, since that is the common twist in Chicago and probably everywhere else. 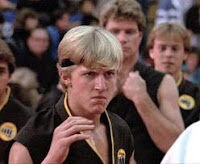 e the subjects of this costume are both very 1980's, it's not very topical in this day and age. I suppose that's why I'm also the type of guy to dress as Johnny Lawrence, the bad guy from Karate Kid, portrayed by William Zabka, the a-hole in just about every movie back then. However, not only do I have a pimped out Cobra Kai gee to wear, but I'm going to grow my naturally blond hair out in the next couple weeks so I can have that piss poor feathered look. I'm not likely to be very attractive in the 2000's with that kind of hair, but it's just too funny not to try to pull that look off.

What are you going to be for Halloween, Seven Readers, or do you have some good ideas to throw out there to the community (of seven readers)?
Posted by Dr. Kenneth Noisewater at 6:58 PM

There's nothing about this post I don't like. I love "the Dr. Ken phase out." A lot of guys have that move, but this is an eloquent way of putting it.

Finally, I love " . . . portrayed by William Zabka, the a-hole in just about every movie back then." That's so true. Johnny was never a very sensitive guy. I still have nightmares of teenage boys chasing me in skeleton suits.

A favorite post I read. And somehow I got that stupid snippet of Harriet talking saved on my computer & I HAVE been known to sneak it onto the occasional mix CD. Along with a song from the dog's barking Christmas carols that my mom got me once.

I'm so glad that show is before my time because I hate cutesy children & most sitcoms.

I guess because I grew up in the 80’s, that look still does it for me when a woman can pull it off. Huge hair, stirrup pants and ankle boots rock my world.

I want to hear about the phase out. I might need that someday, when I get tired of my wife.

You hit the nail on the head with this one !!

Just watch the credits roll in any 80's movie, and you'll see it !!

I am impressed that you would grow your hair out for a costume. That takes dedication.

As I live in Florida (and extreme SW Florida -- "God's Waiting Room"), my friends and I are going dressed as geriatric super heroes.

I will be Geriatric Super Girl. Her red boots will be red orthopaedic shoes. Her cute little short red skirt will be knee-length, with compression hose beneath. My cape will be stuck in the back of my skirt, but only half-way. I will be nearly as awesome as that fateful Halloween that I dressed up as the Queen of Hearts and was photographed in a Prince Charming/Sophia Petrillo threeway in an alley.

OMG - My word verification is miyagi, I shit you not!

hey doctor. there's sort of a party at my house. food, desserts, drinks...and I'm dressing up as a 'hooker vampire.'

Well my Halloween costume has already been posted on the blog so my secret is out. I look forward to seeing photos of you as Johnny Lawrence. And don't forget the body bag.

Vodka: Glad you liked "everything," and keep coming by. : )

Andrew: I'll take one of those mix discs, please.

Heff: Yes, Scott as "THE Asshole."

Donk: Are you serious? That was really the word verification? That's scary . . .