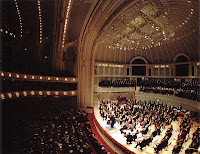 I went to the symphony the other night, and I was surprised how much I enjoyed it. There really is no substitute for seeing that type of music live because as you see each group of instruments playing, you can hear it coming from those various places, so it really is an incredible sensory experience. It makes me wonder just how in the hell someone could write all that, thinking who would be playing what. Also, seeing that makes me feel like an idiot for being such a fan of rock music, but I know it's only rock and roll - but I like it. Like it. Yes I do.

I was with a lady friend, and we were trying not to stop laughing at an old and fat trombone player who appeared to take naps in between his sections, slumped in his chair with his eyes closed. Ladyfriend was saying that perhaps he is a narcoleptic, and it would be even more fun had he had Tuerette's Syndrome. I'm thinking even better to have a Tuerette's conductor, blurting out "cocksucker, shit . . . tit!" That would not be too classy. 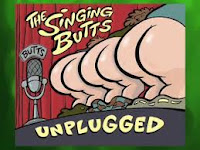 Speaking of which, when I went to take a pee, a guy was blasting out epic splattery diarrhea farts in one of the stalls, and I was thinking that wasn't a classy maneuver either. It sounded like a b flat, perhaps from a bassoon. An orchestra of farting would be so awesome because it would add smell into the whole sensory experience I spoke of earlier. Maybe I'm nut cut out for a life of "culture . . ."
Posted by Dr. Kenneth Noisewater at 1:43 PM

My first suitemate in college had Tourette's. He didn't cuss but he sounded like a velociraptor a lot. One of the chapel speakers called him out because he didn't know the poor kid had Tourette's. I wasn't there, but it sounded so horrifyingly awkward that I wish I hadn't slept in.

Maybe you should make a YouTube video of a fart symphony and then send it to the big show.

You could be on to something.