Finding myself single and reentering the dating scene has been equal parts weird, embarrassing, fun, exciting, awful, and scary. However, nothing has been quite as bad as a story a friend of mine recently relayed to me (same friend as this post). 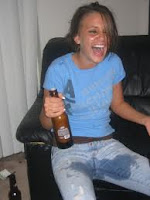 Apparently, she had her first phone conversation with a guy from a dating site, and he asked her what her most embarrassing moment was. She said that she couldn't really think of one off the top of her head, and she asked what his would be. This is the time where, on their first conversation, mind you, he decided it would be a good idea to tell her about the time he was on a date with a girl where they were watching a very long movie, and he had to pee really bad but didn't want to miss anything - so he pissed his pants. Surprisingly, the girl on that date never called him again.

It gets worse. On my friend's date with this guy, he told yet another story in which he was at a bar with a long line for the bathroom, and he pissed his pants on that occasion too. Wow.

Anyone want to share an embarrassing date story? I'll level with you guys, since we're all friends here: I went on a date with a girl where there was free beer at a bar involved, somehow, and when she showed up I had maybe a little too good of a free buzz going. She said she had to go to the bathroom and disappeared. Maybe she was just scared she was falling in love with me. Right? That was my understanding of it.
Posted by Dr. Kenneth Noisewater at 7:00 PM

Well, I was with some classmates about a year ago when I lived in Florida. This girl I liked was with us, & I was doing everything I could to seem normal. And apparently that ended up being stealth drunk (it literally came out of nowhere) & puking all over myself. And then when said girl got in a cab to help me get home I puked in the cab & on the cab driver's arm. She helped me pay for the ride & went up to my apartment & got some paper towels & cleaner & cleaned up my puke while I lay dying in front of my door.

I learned later that she was already talking to a guy because they were dating within a week.

Drew: It's too bad because she must have been a pretty cool chick to have helped you out like that. How's that go in "Wayne's World?" "If you spew, and she bolts . . ."

I haven't been on a first date since I was 17. Yikes! But I do remember that on my first date with my last boyfriend before my husband we went to a party. The punch was delicious and I ended up puking all night after having way too much. He held my hair while I puked on the first date and then called me the next day to check on me. He was awesome...until he started following me and snooping and being creepy.

I think on my first date with my husband I got so drunk I puked too. I think maybe that is a first date theme for me? That it's like a test. If the guy holds my hair, he's good. Great. Now I am terrified of the possiblity of dating again.

All I gots to say is, I'D HATE to be single again. It's FREAKY out there !

So she still went out with the guy that told her he pissed himself?

Radio: It seems as if we may share a dating philosophy - get blind drunk.

Heff: Yeah, it's rough out there!

Nobes: Yes! I'm surprised she gave him a shot after that disclosure.

Seriously though, I'm super stoked to have never puked on anyone!

Orgo: Wow. Crying on the first date is kind of a no-no, I'm thinking.