Old Style Beer and the Old Style of Peeing

Wrigley Field announced that it will stop carrying Old Style and replace it with, rumor has it, Coors Light. This is a tragedy. Yes, Old Style tastes like liquid ass, but it's a man's beer - it tastes like a beer. Bitter, gross, and like diesel fuel - it tastes like when your dad gave you a sip of beer when you were seven and you wanted to puke.

Now, Old Style used to be a quarter or fifty cents cheaper, but then it became the same price. Once it became the same amount of money, the only time one opted for the Dog Pile (as it's sometimes known as) is when the Bud beer vendor hadn't been to your section in a while. It's not like I'm going to miss the taste of the beer too much, but taking away Old Style is kind of like taking away tradition. A nasty, skunky tradition that I treasured and something that has been a part of the ballpark for as long as I can remember. 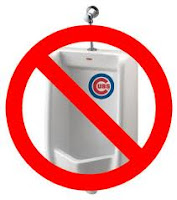 If you're anything like me, and I hope for your sake you're not, this is making you worry that they will take away other mainstays, like the trough-style urinals. I started a Facebook group to keep the troughs in Wrigley around a year ago, and we have built a robust number of seven people who are willing to put their name on a movement to keep peeing in something horses eat out of.

Most beer tastes like sour piss. Isn't that why men drink it cold, to take away the taste? As for those trough urinals, they look quite civilised. Anything that reduces the distance between the pecker and the porcelain is a good idea.

I've had Dog Pile...I mean Old Style, and I actually REALLY LIKED IT. Damn shame if it's beaten out for Coors Light. Old Style has some real Chicago history behind it.

As far as PISSING, hell, just give me a good ol' CORNER and I'm happy.

Gorilla: It actually maximizes space for peeing because there is no space between peers. The only more efficient way is the jungle.

Heff: Thanks for chiming in, son! Sometimes I like a beer with a little skunk on it to remind me that it's a damn beer.

I think those urinals are going to give me nightmares...

I would love to join the movement but as a Cardinals fan you know I can't support anything Cubs related. We do not get the pleasure of getting Old Style in Idaho but I do remember taking a few sips of that liquid ass when my grandpa would leave them out when we would visit the relatives in Illinois.

My son went to his first cubs game a few years ago and the thing he talked about most was the bathroom. You can't ever take something like that away.

Andrew: Fear not the trough! We're all friends when we're dipping our willies into a trough!

Radio: Yes! I talked about it as a kid too, and I'm still talking about it.

I love peeing in a trough! You don't get that often enough these days.