LSD and I went to an alumni party for the graduate school she is going to in California, and the rest of the new students they were welcoming were incoming undergraduates. I joked with her on the ride up that someone was going to think we were an undergraduate student's parents, and someone actually did ask us that. I don't think we look old enough to have an 18-year-old kid, but I was hungover and she was tired from a half-marathon. Still, that was a tactless question, and the guy with a lack of tact was my role at this function, damn it.

It was at someone's house, and they had lots of money. I'll never have a kitchen that big. Ever. There were some pretty awesome cookies with the school's mascot on them, so that was fun. Also, I started with two coke zeros, and then my mood really improved when I saw there were Heinekens in another cooler.

I met a mathematician, so I asked her if she heard the one about the constipated mathematician? You know, he worked it out with a pencil? Now, that's a disgusting joke that paints a really gross picture, but how often do I get a chance to use that joke?

We met a girl with the last name of Stream, so we'll say her name was Sandy Stream, and I told LSD on the ride home that she has a great pee-pee-porn name.

Maybe it's best for LSD's career that she get away from me for a little while . . . 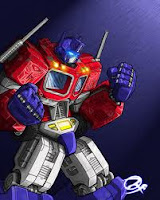 On a serious note, we met a guy who seemed very sad for us that we're starting this long-distance relationship, but he seemed to like us and was optimistic, reminding us that two years when you're an adult goes by very fast. I'm trying to be optimistic too, like Optimistic Prime. I mean, I am a pretty awesome boyfriend for driving her to and from this event, and peppering conversations with uncomfortable comments. If I could turn into an 18-wheeler like Optimistic Prime, I'd drive all her stuff out there, turn into a robot for a bit, run around on the beach scaring the shit out of people, maybe even have an awesome tailgate party in the back.

Wait, what happened to the "serious note?" This will be a tough period, but she's the shit, I'm the shit, and together we're anything but shitty, so this just has to work. Thanks for reading, everyone.
Posted by Dr. Kenneth Noisewater at 12:50 PM

i think having realistic expectations about anything makes for a positive experience... what am i doing giving you happy platitudes, you're the older and ostensibly wiser one

Jov: I'll take advice wherever I can get it because I don't learn stuff easily despite all my years.

Long distance relationships can be a blessing, if you spend the rest of your life together you will still be learning about each other from the time 'the other was away' and keep something new and exciting in the relationship. It is also a great way to sustain a drama free existance, where other friendships can be maintained without that person always there. Also it will only strengthen your bond if you are truely into each other beacause you will attach more at an emotional level. Plus there is always an end in sight :)

Looking on the positive side, it's an opportunity to have some great phone sex.

Curly: I think your cousin cant attest that we have been known to be "into each other." But seriously, thanks for the words of encouragement.