Rape Me, My Friend.

I was running today to "In Utero" by Nirvana, something I hadn't heard in a long time. What struck me is that this is their worst record by far - not even close. He had success and too much fame for his tastes and wanted to release a big F-U to the public, and he was probably horribly depressed and doing too many drugs. Still, it's a better record than most any band will ever make; He was such a naturally gifted songwriter that he made a good record in spite of himself.

Then when "Rape Me" came on, I thought about an Environmental Science class in high school that I was taking when that record came out (Dr. Ken went to school during the grunge era) and a project we had in which we had to bring in a CD to play with a song that was about the environment. 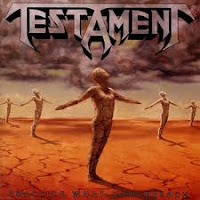 A young Dr. Ken, a metal-head at the time, read a few lyrics from a song called "Greenhouse Effect" by Testament, which is a rather awful song about, you guessed it, the greenhouse effect. Only like three tracks still hold up on that album, but the cover art is still terrific, don't you think? I didn't want to play it on the stereo because I thought the metal would scare the other kids - I was a giant pussy at the time because now I would be more like, "deal with it, pussies." 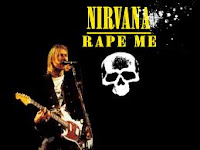 Then, a classmate of mine had the teacher put on "Rape Me" by Nirvana. We listened to the whole thing, and the teacher was obviously disturbed and offended, especially by the time it got to the breakdown at the end where Kurt is just yelling "rape me" over-and-over again. She asked the young man what the song is supposed to mean and just why in the hell did we listen to that whole abrasive thing, to which he said, "I dunno. I couldn't think of anything."

He could have made something up about it being about mother earth being raped by non-earth conscious consumers using too much hair spray and polluting and the like, but nope, he just came clean and said he couldn't think of anything. Outstanding. A good day in my otherwise highly uneventful high school tenure. Don't forget to turn off my music player along the right panel if you want to see this awesome live performance of "Rape Me" with a young Dave Grohl going all the way off.

Teenage angst has paid off well.
Now I'm bored and old.
Self appointed judges judge.
More than they have sold!!!

Wow. Testament. I'm gonna have to hit my archives !

JD Morrison: Those are great lyrics, right? I love "Serve the Servants" but there is some filler on there.

Heff: Yes! The good songs on that disc are the title track, "Sins of Omission," and "The Ballad."