Here's What Have I Learned About Slash and G N' R from Reading the Slash Autobiography . . .

1. Slash met David Geffen many times as a little kid through his parents.  Geffen would sign him years later without knowing at first that he knew Slash.

2. Slash's mom was dating/sleeping with David Bowie for quite a while.

3. When Guns were on the club circuit, they had a tiny studio space they rented and built a bunk to sleep in.  One night, Izzy and Slash were in the same bunk taking turns sleeping with a girl, and Izzy shot a load on Slash's leg on accident, prompting Slash to say, "We gotta get a bigger place, man."

5. Slash got busted in a car with a friend who had a needle on him, and he had to go to jail.  He spent three days in county suffering through cold turkey heroin withdrawals before Axl bailed him out.  It was only later that he found out the charge was for an unpaid jaywalking ticket.

6. Duff lived next door to Sly from Sly and the Family Stone who would come by to use Duff's bathroom.  He would be in Duff's bathroom anywhere from 5 minutes to 2 hours doing PCP and all sorts of other drugs and then just left. 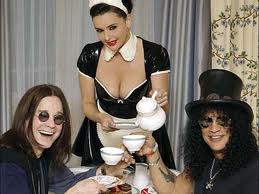 7. Slash was given his nickname by actor and family friend Seymore Cassel who said he was "always in a hurry, zipping around from one thing to another."

8. There.  Now you probably don't have to read the book.  It has a couple of great stories, but it's not nearly as entertaining as Ozzy.  Go read that.  You'll find he is just about the funniest guy alive, musician or otherwise.  Actually, I lent it to my neighbor, and I better damn well get it back, as I plan to reread it some day.
Posted by Dr. Kenneth Noisewater at 6:14 PM

Oooh, thanks! Dr. Kenneth's Cliffs Notes!
I really didn't want to read it, anyway. I read Nikki Six's a while ago, though - pretty interesting.

It's amazing how much Slash and I have in common, when you consider that we've never actually met.

Ozzy's book was good. I'll stick with the CliffNotes on this one.

Mike: Lots of similarities because I remember when you shot a load on my leg that one time.

Heff: Glad I could save you the time, but I prefer Gancey Notes.

Sybil: Nikki and the Crue show up in Slash's book a bit. He is cool with them but hates Poison.

Agreed. I read Slash's book and it was painfully slow and boring.. SKIP IT!!! I could give a shit about your BMX days....