Get a look at this video.  This is a clip of some DJ's making fun of Tyler Hansbrough from the Pacers trying to read "Chicken Little" to some kids in Indiana.  HLP (Heterosexual Life Partner) told me about this thing over some beers and Zubaz, and watching it today for the first time, I laughed so hard that I nearly shot Mountain Dew out of my noes, which is weird because I haven't done the Dew in years.  Here's some things that are awesome about this chronological order (be sure to turn off the music player on the right before hitting play).

1. Ironically, In the first line of the story he says that Chicken Little was not the brightest chicken in the coop.

3. His reading is so choppy and obviously at around a 5th grade level, so just how in the hell did he attain a bachelors degree from North Carolina University?  I'm quite sure the readings for his Western Civilization class were a little more advanced than "Chicken Little."

8: At 4:10, they play him saying "In-i-anna Pacers," as in minus the "d," a couple times in a row.  This might be where I laughed the hardest because he plays for the damn team in the damn city and can't say it right!

9. I probably wouldn't poke fun at this guy so much because there are lots of people with reading difficulties, but in last night's game against my beloved Bulls, he shoved Brian "The White Mamba" Scalabrine.  There is no need to shove the garbage-time bench player who gets a standing ovation from the crowd just because he's a goofy-looking ginger who barely plays, especially since Hansbrough's illiterate ass was down 20 at the time.  Maybe we have Tyler and White Mamba in a reading contest, live from the "libary." 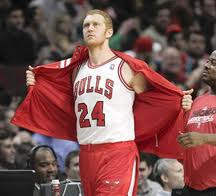 He is dumb as nine chicken little's.

I love that you are only making fun of him because he shoved your guy. That's hilarious! This whole thing is I mean. A corn. That's my favorite. I may have to start saying that.

Sybil: At least. He'll never be a "libarian."

Radio: "A corn fell from the sky." So damn funny. Don't mess with the White Mamba!!

At least he has some inflection in his tone? I'm "gasping" for something positive here.

Nor I not the sharpest tool in the shed...

Urbanist: He does TRY for some inflection, but man . . . It's really labored reading for a children's story.

Just: He is a couple fries short of a Happy Meal.