Do you guys know Nikki Glaser? She's a comedian I started following because of her appearances on the Howard Stern show. She is an attractive woman who sometimes makes raunchy jokes but seems like a nice person. She opted to quarantine with her parents in St. Louis, and she is doing live speed dating with fans. I clicked on there tonight to check it out, and I was so nervous and uncomfortable. My ass is still sweating, actually. That is super nervous when you get that ass sweat flowing. What is that? I should really be asking a doctor about that or something. And it was weird being nervous because I wasn't even on the dates myself, but maybe it is that much more awkward because it feels like I shouldn't be watching. Like I'm snooping. And it isn't at all like watching a reality show because that is edited. This was live! So weird. Also her parents were in the next room cooking dinner and dad popped in to say hi in between dates. Let's break down the four dates I watched before the butt sweat became too uncomfortable to continue. 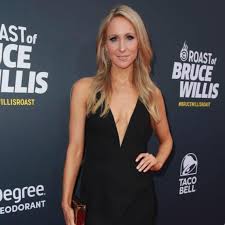 Guy 1: The Philosopher
He took the call from a bathroom, which immediately made me think he was married and hiding out from his wife. Also, he said this was his second date with her because I guess he did another speed date a different night. He really shouldn't have logged on for another one, so that rubbed me the wrong way too. And he was trying to impress her with all this philosophy stuff he was reading, but he didn't seem all that bright. Good looking though. Looked like Jay Cutler, former QB for the Bears. And I hate Jay Cutler. Very aloof like him, like he didn't care, and she said she liked that quality in him. Then when she was trying to wrap up he was clambering for more time, and that just came off as needy. So he's a needy guy trying to act like he doesn't care?
Guy 2: The Dog Guy
This guy appeared in his back yard showing off his garden with his dog licking his face every few minutes, but I have to say that I liked him. He really listened to her, laughed naturally, and he asked her questions. He would answer a question and then keep turning it back to her. He was a good looking fella, just not nearly as much so as the first guy. He seemed intelligent and nice, works as an engineer in LA. If I have any complaint it would be to get up and move to get away from the dog and the licking, but that's it. Other than that this guy seemed great and all the comments agreed. Did I mention people were commenting during the date? She makes it so she and the date can't see the comments during the date, but she reads a few of them in between dates.
Guy 3: Tea Guy
This dude was drinking tea, and when she asked what he has been up to, he said drinking tea. Is that a hobby? He was a good looking guy and a little bit effeminate. He works as a manager at a comedy club in NY that she plays at regularly, and he said he already met her, gave her a check for a gig once. She could not remember meeting him, but he said he was shy. She asked about a memory he had, and it was a story about his father chasing down a balloon that his sister dropped, and I really was riding with him for it to be a good story. It just wasn't. He got hit hard in the comments about that too. He seemed nice enough, just phony.
Guy 4: El Pulpo
Nikki was mentioning that she needed more people of color for her dates, so when this Black guy appeared he said, "I heard you needed a black guy!" Very charming and funny guy, just not a very good-looking guy. He is a lawyer, so he was confident, but he was living with a bunch of roommates, so that was odd. She asked why his Instagram handle had 6-finger in it, and BLAM! He shows that both his hands have six fingers! I went with El Pulpo for this guy's title because that was the nickname of a 12-fingered pitcher on the Chicago Cubs years ago. El Pulpo means the octopus in Spanish. I had to cut this date short because I got tired and my phone was running out of batteries, but he seemed popular in the comments. Just entering the friend zone is all.
In the comments let me know an answer to any of these questions:
1. Who sounded the best?
2. Who sounded the worst?
3. Why do you think I get a sweaty ass when I'm nervous?
4. Why in the hell did I get nervous watching speed dates that I wasn't on?
Posted by Dr. Kenneth Noisewater at 8:34 PM

Sometimes I'll get anxious knowing that I'm about to watch some awkward, painful trainwreck of a situation. Especially when some guy is about to do something like the speed dating. After those guys even I might have a chance.

1. Who sounded the best? The dog guy because I am a dog guy.
2. Who sounded the worst? El Pulpo. Six fingers and a bunch of roommates. This is how those documentaries about serial killers start.
3. Why do you think I get a sweaty ass when I'm nervous? Probably because you're gay.
4. Why in the hell did I get nervous watching speed dates that I wasn't on? Again, probably because you're gay.
I kid, Dr. Ken. Or do I? Yes, I am kidding. I think you were probably nervous for Nikki and evidently you have a lot of sweat glands in your butthole. Or maybe quit wearing those polyester sweat pants.

Shife: Gay as the day is long. HAHAHHAHHAHAHA!!!!!!