My boss at a record store I worked at years ago, my best job ever, once said that Fast Times at Ridgemont High portrayed Italian Americans in a bad light, since Jeff Spicoli and Mike Damone were such shits. I thought at the time that it was just another one of his stupid theories, we all had them, that we would throw out there on a slow Sunday afternoon, but after watching it again last night, it was the Lovely Gancer Girlfriend's first time around, I think he was really onto something. 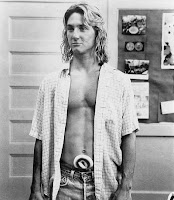 1. He never held a job, choosing instead to consistently smoke pot all day, often with guys who looked an awful lot like Eric Stoltz and Anthony Edwards, and sometimes to the point where he couldn't feel his own skull.

2. He was a lousy student. He showed up late to class, once wearing a flannel with no shirt underneath and a bagel tucked into the front of his pants. On at least one other instance he ordered a pizza to his classroom, without his teacher's permission, to learn about Cuba and have some food. Yet another time he went along on a field trip when he wasn't even in the class to see cadavers because he thought dead bodies were "gnarly."

3. He borrowed a friend's older brother's sports car, smoked reefers and drank beers behind the wheel, and crashed it into a pile of cinder blocks, totaling it. After failing to fix it with his father's, who was a television repair man, ultimate set of tools, he resorted to making off like a rival football team trashed his car. This led the car's owner, an already unstable defensive lineman, to have an enraged, frothing at the mouth performance against that team, leading to numerous injured players, one of which was twitching and having convulsions. These events were all set into action at the hands of the devious Italian American, Jeff Spicoli.

4. In the epilogue we learn that after high school he would save Brooke Shields from drowning, which is good, but he would later blow the reward money on the costs to get Van Halen to play his birthday party, which is not too good.

1. He was a high school grifter of the worst order, scalping rock concert tickets at school and at the mall with a keyboard scarf slung around his greasy, Italian neck*, sometimes trying to talk impressionable girls into going to Cheap Trick concerts when they didn't even like the band. He also was a bookie, a very stereotypical Italian American profession, and tricked his clients who didn't understand the unfair odds he was laying against them, and offhandedly told them about a spread only after the bet had been made.

2. He helped his friend gain the confidence to ask out a girl he was pining for using the Mike Damone 5 Point Plan, only to sneak around and nail her behind his friend's back with a twelve second bump, squirt, and a giggle in a pool cabana. Later, when she told him she was pregnant, he responded with a "you wanted it more than I did!" He agreed to pay half the cost and give her a ride, but ended up standing her up and giving her none of the agreed amount. When she called to see where he was, he had his mother tell her that he was helping his father in the garage.

3. In the epilogue we learn that Mike Damone would end up pumping slushies at a 7/11, unlike the non-Italian Hamilton who foiled a robbery and made assistant manager.

One can even look at the cameo roles in the film. Nicholas Cage has no speaking roles, but he can be seen both in high school and burger joint shots. Who is Nicholas Cage's uncle? Francis Ford Coppola, another Italian Amerian who made The Godfather, perhaps the film with the biggest legacy of Italian American Defamation. Think about it, man . . .

Your turn, seven readers: Tell me something you've seen in the media that portrays a group of people in a bad light that few people point out, or just tell me a scene from Fast Times that you like, not counting the part where Judge Reinhold is whacking it to Phoebe Cates because that is everyone's favorite part.

*There was no need for that greasy comment, but I couldn't resist turning it up a notch for effect.
Posted by Dr. Kenneth Noisewater at 9:05 AM

every movie in which there are irish characters. every. single. one.

however, i am firmly convinced that the irish (myself included) are the only group of people that if you come up to them and tell the worst irish joke you know, will laugh with you, and one up you, while toasting you. try that with a black/asian/indian(feather, not dot)/mexican/jew/italian/polack/blonde/yo momma/battered woman. you'll be hard pressed.

what will you always find when you see four irishmen?

I've never seen that movie before.

The Mike Damone character was totally underated. What a great, funny character.

this is america. last names don't mean anything.
my last name is ridiculously nordic but im mostly italian thanks to all the intermarriage and breeding of different types of white folks in my family's history.

I remember so little about that movie that you haven't already mentioned.

no one can laugh at themselves like me and the rest of my chosen people.

what do you call a jewish gay guy?

Chud: This is coming from an Irish American with Drunken right there in his name!

Zibbs: Yes! He was real awesome. Why didn't he get roles in some gangster films or something? I can see him as a hood.

Jov: So we can't offend you with ethnic jokes with any specificness? Are there any mutt jokes?

Heff: The covers most of it. That and Jennifer Jason Leigh was a 15-yr-old ho, who later got railed on top of a firetruck in Backdraft.

heblew... har har har. i am so using that tonight.

"But Dennis he called me a moron!"

The Trailer Of Love

I need to watch that movie.

speaking of the irish:
why did the irishman put 239 beans in his soup?
because one more would be TOOFARTY

jersey... i am actually loling at that right now. and now i'm off to tell moms that joke.

Chud: I used it today, too. It went over BIG.

Wil: "If you don't shut up I'm gonna kick 100% of your ass!" Every time I see that scene, I can't believe what an a-hole that customer is, and I'm as mad as Judge Rhinehold.

5000: Those commercials were bad for leprechans, the movie leprechans really gave them a bad name cause that one tried to kill Jennifer Aniston.

Jov: My sister loves that joke. This is your third visit! I need to drop by your blog and try to catch up.

Chudly: How'd that joke go over with mom?

'Donk: It takes some nuts to order a pizza to your classroom.

Shife: I like how he's dead serious when he asks if the guy is going to shit or kill. Sean Penn is nothing short of brilliant in that one. Dead Man Walking? Never seen it, but I can watch this one 100 times.

I guess the positive portrayals of young Italian Americans via "AJ Soprano" in "The Sopranos" and the Gotti kids in "Growing Up Gotti"--as enterprising Italian American kids who live off their own brilliance and ingenuity, and refuse to take a parental handout--was kind of Hollywood's way of paying pennance on this issue.

dude, both jokes went over great. moms died laughing, and as luck would have it she had a co-worker over that is off the boat from ireland, and she almost peed herself. and the heblew one was a hit at work.

Zen: Yes, that does help, but Spicolli and Damone have done too much damage. : )

Chud: That's awesome! Thanks for coming back to report that!

*puts arm around the doc*

sorry bud. i had hopes.

Groundskeeper Willy on the Simpsons is a cliche, but guess what? I know at least three scotsman that are exactly like him. One even has the wild red hair.

Chudly: Thanks, bud. It's not been a fun October for The Gancer.

Steph: Is this the Aussie Steph? Are you blogging again?

It truly amazes me that you bastards still remember dialogue from this movie.

Old but a classic:

Paddy was picked up on a rape charge. He was placed in a lineup with ten other fellows and the accusing woman was escorted into the room. Paddy jumped forward, and screamed "That's her! That's her! Oi'd recognize her anywhere!"

Two Irishmen met and one said to the other, "Have ye seen Mulligan lately,Pat?" Pat said, "Well, I have and I haven't." His friend asked, "Shure, and what d'ye mean by that?" Pat said, "It's like this, y'see...I saw a chap who I thought was Mulligan, and he saw a chap that he thought was me. And when we got up to one another...it was neither of us."

To be honest, compared to the filthy Italians I know, these guys are Citizens of the Year.

Heff: It's got some great lines, man!