1. The Chicago Cubs are falling apart, but I'm hoping that they will catch fire for the playoffs, if they make them. Who's got some wood I can knock on or a goat I can slaughter?

2. There's a new post at The Liar's Club, our Chicago based blog. Once there, if you scroll down, you'll see that the last five posts have been from me (not counting quick ones to say "I'm retiring" and "What the hell happened to this blog?"). When I'm the hardest working blogger, we got big problems. We need more consistent posts, and we're taking applicants. Email me if you live in Chicago, and would like to be a Liar. Of course, your "hiring" would require approval by the other two remaining Liars (Niner just retired to make babies. That's the only way out of this gang.)

3. I went to the annual carnival in my home town over the weekend. The first part of the day was fun with my mom, my sister, and my nephews. The first grader and I rode the Gravitron (which is the one where they spin you around and take the floor out from under you) with a bunch of obnoxious middle school kids. It would have been a great time to have used my nausea to have an amusement park related "accident" upon one of said annoying teenager's Hollister shirts.

Later that night, I met up with some friends at the beer tent where a friend of mine was stationed. He is a member of one of those organizations where a bunch of old men do volunteer work of various kinds, but a lot of the time, I suspect, is spent telling dirty jokes and participating in farting contests. Everyone in that tent was 20 years his senior, but he seems to be real happy. The problem is, we couldn't spend those beer tickets. We'd try to hand them to him, and he'd hand them right back with a bunch of beers.

When he gets done with his beer pouring shift, he dumps off a mess more of free brews, and tells us to go to his dad for the remainder of the night. Dad looks exactly like Brian Dennehey, and he was just as resistant to taking our money/tickets. There was one point where I remember looking down in the circle we had formed, and there were like ten full cups between us in the grass that we were trying to conceal to avoid unveiling the corruption leading to our intoxication. It's a good thing I didn't go for a late night Gravitron ride because it would have been like mixing up a vomit smoothy up in that piece, and nobody wants to order one of those these days. 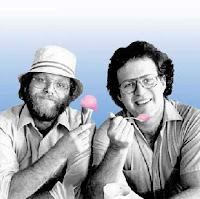 4. I don't know what made me think of this, but I was trying to hash out the differences between two third graders who were not getting along on a playground. I asked them their names and they were Ben and Jerry. I said, "Boys. Boys. I'll tell you what. I know a couple guys named Ben and Jerry who get along real well, and now they've made millions of dollars together selling a shit* load of ice cream." Well, I don't think that my example hit home with these youngsters, but after Jerry managed to stop his crying fit, I got them to agree to get along. They could very well be on opposite ends of a see-saw getting along famously at this very moment. Then again, they could be loading up each other's mail boxes with pipe bomb recipes they found on the internet. That's the crazy thing about kids: You just don't know what they're going to do next.

5. I just discovered this song, and it cracks me up. They have pinned down the exact moment where you know you're in love: When you go on a picnic together, and you don't even bring any beer. That's when you know it's on.

*Kids who are in the cool crowd are always trying to say stuff to act cool and more adult-like, but the funny thing is that the adults of the world think the really nerdy kids are behaving more like adults. Any way you slice it, being trapped on a Gravitron with a bunch of punk kids, with your organs stretched in a knot, all the while trying to keep your nephew from hearing swear words is not a good time.

The Brewers are falling apart at the same time. The Cubs could lose half of their remaining games and they are still in. Not so true about my White Sox.

I don't know if you know this but I am a Cardinals fan so it brought me so much joy that they helped the Cubs get back on a winning streak. Man what a crappy series for the Cards. They could have swept that thing easy, but now I think the Cubs will be OK because they were suppose to play red-hot Houston but the postponement of a few games might cool them off.

Wait, are you saying the only way I can stop blogging is by retiring to have babies??

"Kids who are in the cool crowd are always trying to say stuff to act cool and more adult-like, but the funny thing is that the adults of the world think the really nerdy kids are behaving more like adults."

Hey, that's true! I never thought of it that way before.

Also, there was a Weezer song playing on that thing in your masthead over the top of the Cheech and Chong video, and I was thinking, shit, this is the cheapest way to make a music video EVER. It kind of worked, though.

Niner: It's an uphill battle for the Sox, I'm a afraid. The Cubbies should make it to the playoffs, but they'll have to play more like they were a month or two ago if they plan on staying there long.

Shife: Why didn't we walk Pujols? Every time he stepped in the box he ripped an extra base hit, and often costly ones. I'm also glad that Houston is cooling off in the hurricane.

Chardsy: No, the only way out of The Liars Club blog is to get knocked up. The only way out of regular blogging is to have regular sex for a while. I swear, when bloggers dissapear, 9 times out of 10 that's why.

5000: I hope you did yourself a favor and hit pause on the music player so you could listen to the Cheech and Chong song. It makes me happy. In fact, I'm fixin' to listen to it right about now . . .

You totally should have said shit. I bet they would have paid more attention...

"Sianis was outraged at the ejection and allegedly placed a curse upon the Cubs that they would never win another pennant or play in a World Series at Wrigley Field again because the Cubs organization had insulted his goat, and subsequently left the U.S. to vacation in his home in Greece."

From the linked Wikipedia article.

I would recommend tearing down the current stadium and--as I have proposed many times--getting Nicorette to sponsor the new "Nicorette Stadium"--there is more money, I would think, in gum that sells for $22.99 a box than there is for gum that sells for 50-cents per pack.

Of course, a goat should then be made mascot and given his own permanent box seat.

The only other option I can think of is to: 1) Hire some really good players; 2) Hire a really good coach; and then, 3) Devise a strategy that I would think would involve a really good offense coupled with really good defensive play when the Cubs are not playing offense, thus scoring more than the opposing team consistently throughout the season and the Series.

For someone who knows very little about baseball, I think the later strategy is very prescient on my part.

I hate the gravitron. Give me a roller coaster over that any day.

I must have missed it the first time but thanks for the Cheech and Chong video. I love those sons of bitches. I just saw a picture of Davy Jones' man boobs so this definitely helps put me in a better frame of mind.

A "vomit smoothie." Have you informed Jamba Juice of this latest flash of brillance? It may go over well in Asia where the use of fish sauce is abundant.

"That's the only way out of this gang."

blog in, babies out. that's the chicago way.

btw, next year i am so getting hammered and going on the gravitron. seriously, i'm down for creating the lethal mix of high rpms and an already pissed off equilibrium.

Donk: You're right. Cursing is a GREAT attention getter for 3rd graders.

Zen: What do you mean you know nothing of baseball? You know all about offense, defense, marketing, and curses? What else is there?

Shife: I want no part of Davey Jones', or any other Monkey's for that matter's, man boobies. I'm sleepy, and all the possessive words in this sentence really shows it. That sentence sucked too! I quit.

Jenni: Fish sauce is a good touch. I had some killer sushi with eel sauce. What the hell is in eel sauce? I was contending that there has to be some kind of eel secretion in it, but Gancer Girlfriend seems to think it's just a sauce commonly served with eel. How do I find out? To the internets! . . .

Chudly: "Blog in, babies out." hahahhahha. I like it. Drunken Gravitron. Do it!