When my dad was pledging his fraternity he participated in something called The Olive Race in which a bunch of pledges had to run across a big room with an olive held in their asses, and the last place finisher and all who dropped their olives had to eat their cargo. I'm proud of my father for a lot of things, and one of them is that he finished first in this race.

This is out of character for my dad, seeing as he's a college professor who I've never seen drink more than two consecutive beers in one sitting. I mean, he's a jogger like me, so the race I can see, but things in our butts is not a Noisewater thing. 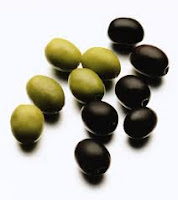 So, yesterday while standing around the appetizers, including olives, before Christmas dinner, I said to my dad, "Hey, do you fancy an olive race?" We all had a good laugh about that, as we've heard the story many times. I had to ask him this time who lost the race, and he knew his name straightaway: Ron Wilson. I asked if he got dysentery and died shortly thereafter, to which my dad said, "I hope so. I hated his guts." I guess old Ron Wilson flunked out not long after eating an olive that dropped out of his own butt. Not a good college experience, I'd say. Go Noisewaters! We're winners!!
Posted by Dr. Kenneth Noisewater at 11:50 AM

Ron obviously couldn't live with the shame of losing. He probably spiraled into a deep depression as his health deteriorated. He even probably died.

I'm proud of your dad.

Andrew: Haha. Yes. He probably doesn't tell his family about the Olive Race like my old man does.

Of course he doesn't. Because he died from butthole diseases.

Andrew: Yes. You know, I hate olives. To me, the ALL taste like they came from diseased buttholes.

I have never heard of olives but I have seen a light bulb in a CT scan at wk... I know a 50 watt

This is no big deal if you douche your rectum before partaking in the race. It has to be a very powerful douche though. Congratulations to your dad and I hope you inherited his tight butt cheeks.

The guys that invented that race, what a bunch of assholes......sorry, I couldn't resist.

Just Telling: Wait, are you saying you know someone who put a light bulb in his/her butt? Did it light up like when Uncle Fester put one in his mouth? A light bulb race seems dangerous if someone fell on his/her behind.

Gorilla: Yes, rinsing out the old wazoo would be highly recommended, but would if the pledges had no knowledge that they would be in such a race? Yuck. As for the tight butt cheeks, I'm leaving that alone. Every joke I thought of, even I had to rule out.

Candy: Actually, it's probably true, so no worries!

Interesting.... I love olives!
All the best
Marinela x

I'm not sure since he didn't want to tell me what was in his butt..maybe he was testing out kinetic energy so he started jump roping to create heat thus engergy to light the bulb...It couldl happen right? If he had said that I would have believed him

DrKN ~ I love black olives esp from Morocco, but I always thought green olives had this particular salty taste.... when pressed up some one's ASS !! Mmmm... I could introduce this as a party trick some time... thank you for sharing this with us... most funny... and hey yeah proud!

Short: Sounds like you're into it. Let me know if you organize a race of your own, not that I want to compete - I'm just curious. Thanks for coming by!

Just Telling: Again, jumping rope with a light bulb in your anus sounds dangerous. You seem to live on the edge, and I respect that.

Indi: Black, green, it's all the same, but it's those brown ones you have to watch out for.