Macbeth in the Hood 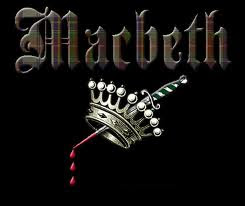 I was teaching Shakespeare's Macbeth to some inner city Black kids the other day, and I got off to a bad start when I called one kid a nickname he didn't like, some kids snickered, so he called me "whiteboy" in response. Now, I knew I was in the wrong, so I just explained to him that I won't call him that name if he won't call me whiteboy. It's not a name that offends me, it's just punking me out in front of the kids, which is kind of like what I did to him. He said he meant no disrespect, and by the end of the class, we were cool - he was reading the part of Banquo.

I hate to stereotype, but oh well: As usual, the girls were participating better than the boys. It was hard to get the boys to even read parts like "Murderer 3," where they would only have a line or two. After Banquo's parts were up, he volunteered to read other parts! This was after starting the class by saying MF'er around 19 times and calling me whiteboy - now I had him on my side, and things were looking up. What's more, these kids were into it.

This is interesting though: after Banquot dies, his ghost comes back to visit Macbeth. It was around this time that our Banquot hit his knee on his desk and let out an impressive chain of obscenities. I said, "Banquot's ghost has returned! And he's swearing!"

That even got a laugh out of some of those too cool for school kids who didn't want to do anything.
Posted by Dr. Kenneth Noisewater at 2:06 PM

It looks like you really got through to them. Maybe Matthew McConaughey will one day play you in a movie about how a white English teacher gets black kids from the ghetto to believe in themselves.

I wonder what they thought of:

"Thou liest, thou shag-hair'd villain!"

Those are great lines to use anywhere.

Gorilla: I would hope that a guy like that would play me in a movie, so that people would think the real me has shredded abs. You know what's a great Shakespeare line? From King Lier: ". . . son and heir of a mongrel bitch." That is thought to be where sonuvabitch comes from.

Denis Leary has to play you in the movie. And he'll be swearing more than the kids.

macbeth decides not to go through with it but lady macbethe changees his mind...
I have given suck and know
how tender tis to love the babe that milks me; i would whilst it was smiling in my face, have plucked out my nipple from his boneless gum, and dashed the brains out, had I sworn as you have done this...

not one of my favbiorites of the bard...but worth the read...witches...and lots going on.
later sweetie.

Beck: Yes. Glad I remind you of him. He's funny.

Vodka: Thanks! That means a lot cause your blog is "consistent as a muthafucka!" A guy said that about my basketball game back when my shot went in all the time. But seriously, check out her page, people. She's funny.

Good work Dr. Ken. Keep it up. I think your final version of Macbeth will definitely be a little more exciting.

Shife: Yeah. I think that play could be staged on the West Side of Chicago. Gets pretty murderous around there after dark.

I find that Banquot’s ghost often returns to deliver obscenity laced tirades this time of year. All the alcohol mixed with all the familial bad blood doesn’t mix.

I’ve finally gotten around to adding you to the blogroll.

You may now have Chicago back. I'm done with it, lol.

Heff: Are you sure? These are America's next amazing actors coming out of Chicago's ghettos. "In the ghetto . . ."