I was at a concert last night, and there was a series of openers, one of which had the most eclectic-looking group you could ever see. I defy anyone to find a band where each individual has their own distinct look, and comes from such a wide variety of different age brackets, shapes and sizes.

I was at the show with my girlfriend, Law School Dropout (LSD), and a good friend of mine, Southie. All of us started playing the Guess Their Day Job Game, and the following is the consensus.

Drummer: LSD decided this guy's name was Merv, and we couldn't argue with that. He was bald, overweight, looked to be in his late forties, presented as a cross between Butterbean (only much thinner than that) and Larry Bud Melman, and he he on tinted glasses. I also thought he looked like one of those fat babies on Maury Povich, especially with the funny slack jawed, fly-catching face he made with his head slightly cocked through out his playing.

His Profession: Southie decided he was a school bus driver. Nailed it. 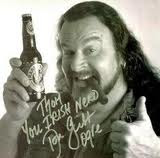 Bass Player: As you can see from the actual band shot below, this guy looks a lot like Ogre from "Revenge of the Nerds," but as Southie points out, he looks like he may have been a love child between Ogre and Kerry King from Slayer. This man is absolutely enormous and looks to be very active in a biker game full of marauders, so I really, really hope he never finds this blog for my safety's sake. 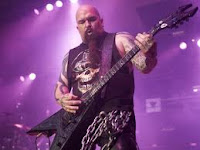 His Profession: He makes the majority of his money selling drugs and assault rifles to other biker gangs, but for tax purposes, Southie maintains that he cleans shoes at the bowling alley.

Keyboardist: I liked this guy because there were very few songs where you could hear his keyboard, and I just got the sense that he is always pushing the band to go in a more progressive direction like Yes or Deep Purple. He had that hair that is long in the back in bald in the front like Klaus Meine from The Scorpions, and he had on a 70's shirt buttoned down with nothing underneath. He was very short as well, which made him look a little like the second half of the life of the late great Dio. 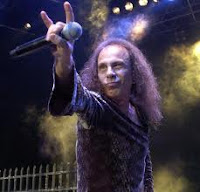 His Profession: He is an insurance claims adjuster, but he produces the band's records in his home studio (his basement), along with local high school and college bands, for whom he also supplies with home grown marijuana, another source of income. He's doing quite well for himself!


Lead Guitarist: Now, when I say this band has people from all across the board, this guy is a prime example because he was way younger and more attractive than the rest of the band. He would be getting any chick showing interest in the band. Maybe on a good night the singer could land some of his run off, but the rest of the band would be hoping for the older bar flies to get on - and there were a few of that night - good luck, Merv! The lead guitarist also had a quite good physique, including some very nice arms, so again, I really hope these guys don't find this blog entry. Actually, though he played with a game face for the duration of the set, he was actually very nice and all smiles afterwards. LSD found his phone on a bench, and he was extremely grateful. Man, am I huge dick for making fun of these guys?

His Profession: We considered pool boy, but how many of those are there, really? LSD decided he was a construction worker, I'm thinking from 7AM to 3PM, and then he gives guitar lessons, showing young hopefuls the joys of the power chords and drop D's. But mostly trying to nail his students' mothers in the process. (There are no pictures because he had no celebrity twins).

Singer: Now, this is really the guy that got us looking for celebrities that they looked like because he had the exact hair and facial hair of Frank Zappa. I really hope he's in a Zappa cover band, having that look and being able to sing and play guitar well. LSD was quite jealous of his thick, lustrous hair, but I reminded her that he probably doesn't wash it much, which is the trick. Think about it: How many bald homeless guys do you see? 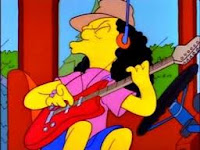 His Profession: Although he also looks a little like Otto from "The Simpsons," bus driver is now already taken by the lovely Merv, so for the singer, we're going with manager at Jiffy Lube. I can just see him pulling that mane into a pony tail and going to work, and I can see him being an honest mechanic, not encouraging his employees to rip people off, despite the heat he gets from corporate to do so. However, Frank-Zappa-Guy has been doing well at his location by getting regulars through his charm that spreads down to his hard-working and dependable employees.

And, here is the pic of the whole band, taken by the lovely and talented LSD: 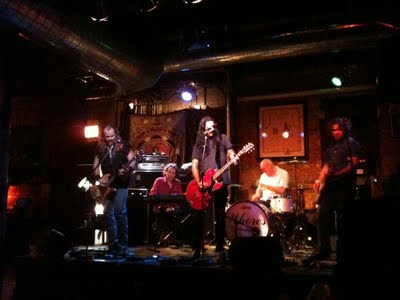 I hope you enjoyed this, Seven Readers, and I encourage you to try this upon your next visit to a rock concert. However, make sure you get there for the openers, as the headlines may not need the day jobs, unless it's all cover bands, which makes for a really good time for this game.
Posted by Dr. Kenneth Noisewater at 11:21 PM

first off, the lead guitar/singer in the middle of the actual band pic. looks like rocky dennis from that angle.....secondly. you and your entourages assesments probably aren't really far off...is this the nordic band you were talking up/about?

They look like the biggest thing since Spinal Tap. The drummer might make a pretty good bouncer if he ever needs a night job.

Burjan: They were opening for the Scandinavian band, yes. Rocky Dennis? Haha. Thought must just be the angle or because there was motion in the pic.

Gorilla: No, the bouncer would get destroyed in a fight, but the bass player would be an incredible bouncer. I would put him at around 6'5". I think he would beat up the real Ogre, and beat him in the belching contest.

Holy shit, I haven't seen his ugly mug in YEARS !!

Heff: Hey, old buddy! Always good to see you pop in. I'd like to take a stab at this game with Buttlik. First off, the guy with the giant meat cleaver bass guitar is obviously an investment banker.

Does it actually say "Whores" on the drum?

I think a band like this would be so much better if they were terrible.

Andrew: It did say whores, but that wasn't the name of the band. They weren't horrible, actually - just strange, which I like.

my bf's uncle plays in a cover band. we go to see them pretty frequently, but weirdly enough i have no idea what any of them do to pay the rent.

Me and Mrs. Shife do this all the time when we are people watching. Since we do not get to go to concerts that often since we are owned by a 2-year-old, we mostly play the game at the playground or park. Good times. Enjoy your weekend Dr. Ken, and thanks for the entertaining blog.

You too, Mr. Shife. You picked a good one to read. I haven't brought it like this in a long while.