I was over at my mom and dad's place today because my dad has some tests for his heart tomorrow and I'm worried about him.  He likes to have me around to enjoy his awesome cooking and to have someone else to yell at the television with during sporting events.  My mom was there too because she is married to my dad, and she told me that she recently ordered a rug from JC Penny's, and what arrived was not a rug.  The paperwork attached said that it was a rug, but it was in fact a pair of jean shorts, or jorts, if you will.  Now, I suppose jorts could be used as a rug if they were for a really, really fat guy with a 70 inch waist, but the shape is not ideal, what with the legs and all.

We pay people like JC Penny's to know the difference between rugs and jorts, and that's what really bothers me about this.  Rugs go on the floor to fill space and look pretty.  Jorts are worn by people with zero fashion sense or quirky gay men who wear them cut really short with fringes hanging down and maybe a construction hat.  They're totally different, and the people at JC Penny's, as they are in the industry, should be able to discern between those differences. 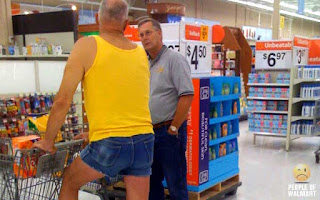 Still, it's a God damned funny thing to get in the mail.
Posted by Dr. Kenneth Noisewater at 8:07 PM

This whole thing makes me laugh but especially "my mom was there too because she's married to my dad". I don't know why but that made me laugh harder than the jorts rug.

Radio: Thanks. I like this pic too. It looks like maybe the guy on the right is a manager and maybe will throw out jorts guy.

Should one first HAVE AN ASS be it male for female before you go down the jort road?

I'm so Fagaphobic, I didn't know those damn things even existed !

Jorts. HAHA. I never heard them called that.

Bama: Are you saying that this fella in the yellow tank top and jorts has no ass under those jorts?

Heff: You are alpha male to the core, brother. Metal up your jorts!!!

Zibbs: Some call them that. My mom called them "jean shorts" when she told me the story, though.

I'm baffled at how somehow could confuse the two. Talk about a lazy worker who didn't even bother to read the paperwork.