Here's Something You Probably Didn't Know . . . 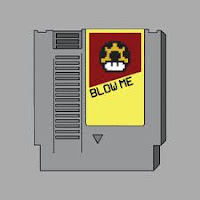 . . . If you played with a Nintendo Entertainment System (NES) when you were a kid, it was preparing you to get a woman off when you were older.

Think about it, you rubbed the game cassette down with two fingers, you blew into it, and everyone had their own little tricks to get it "going," if you know what I mean. It's a lot like foreplay, with the main act being getting to play the game, Castlevania, or whatever.

There were even some industry standard things you could pick up to enhance the experience, such as in Contra: up, up, down, down, left, right, left, right, a, b,b,a,b,a, start (select start for two players). Try those directions with your tongue next time you're down there. Tell her it was Doctor's orders from your old pal, Dr. Ken: a guy who knows his way around an NES, among other things.
Posted by Dr. Kenneth Noisewater at 2:12 PM

My question is THIS :

The N.E.S. "core system" was around WAAAY before the internet came along - HOW DID EVERY KID IN THE WORLD know to blow in to the cartridge before plugging it in ?

It TRULY baffles the mind....

Heff: Great point. I don't know how we all knew that. Pony Express?

the across the street neighbor kids had a little plastic rectangle the length of a cartridge opening with a plastic film sheath that they used to swipe dust off.
...sex toy?

jolu: I thought so too. Thanks!

Jov: For SURE a sex toy, and a homemade one at that. Props.