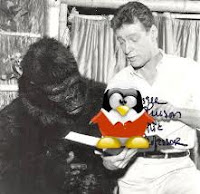 I was in the grocery store late at night tonight with Gancey Girlfriend to pick up some stuff, and she was walking through the store wondering what else it was she really needed in there. It was at that time that she blurted out, loudly, "Oh yeah, tampons!" I was all, "Hey, everyone! This gal in aisle 19 needs some tamps! Give a bitch a price check!" Never a dull moment.

So, when we're in the car, she said that it was a good thing she remembered to buy those, or she wasn't sure what she would have done. To which I said, and I'm sorry that it's stupid, but it's a slow news day here:

"Yeah, you might have had to been like The Professor on "Gilligan's Island," jerry ringing a tampon out of some bamboo or something. Do you think that's what he did when Ginger was on the rag or when Mary Ann's Aunt Flo paid a visit to The Island? I don't think Mrs. Howell would have needed any bamboo; not for that, anyway. That bloody ship had sailed long, long before that "three hour tour," I'm afraid. 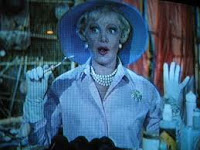 To which Gancey Girlfriend said, "Huh?", half listening, still thinking about the amazingly mind F'ing movie we had just seen (Inception), which was energy better spent than paying any attention to my most recent idiotic tangent.

And there you have it, "Little Buddy."
Posted by Dr. Kenneth Noisewater at 8:59 PM

I posted over 100 a year back in '07, but since then my cycle has picked up, and I find myself running to the store for fresh "tampoons" more often than posting.

Heff: Do your man tampons have wings?